Home Entertainment Amanda Ribas' Brother Arthur Ribas Has Been An Essential Component Of Her UFC Training.

It can be said that Amanda Ribas' destiny was set in stone from the moment of her birth. Daughter of a jiu-jitsu and martial arts coach, she grew up in a gym and was exposed to combat sports earlier. Furthermore, Ribas once tried dancing, but her passion led her back to fighting, where she rightfully belongs. After entering MMA, she has been able to show her true potential.

Amanda isn't the only fighter in her family, her sibling, Arthur Ribas, has also accumulated notable accomplishments in the MMA field. Did you know he had his first amateur fight when he was nine? Not just that, Arthur has been a help to his sister in every step of her fighting career, including during her UFC run.

So, why not let's learn several interesting facts about Amanda Ribas' brother in this article.

Mr. Ribas was born on August 9, 1992, in Varginha, Minas Gerais, Brazil. He is one of the three children of Marcelo Ribas and Mirelly Limborco. Moreover, Arthur Ribas' father is an experienced mixed martial arts, judo, and jiu-jitsu trainer. He runs Academia Ribas Family, a gym/physical fitness center. Not just his dad, Arthur's mom is also a personal trainer at the family gym.

Arthur grew up in a loving family with his sisters, Amanda and Marcelly Ribas. The latter works at MAZ- Associação Artística Marina Azze. Also, unlike her siblings, Marcelly is interested in a different sector, i.e., dancing. In addition, she frequently shares her sister's accomplishments on social media.

Talking about Arthur's education, he graduated from Colégio Cenecista Catanduvas in 2008. He then studied physical education at Faculdade Pitagoras before enrolling at UNIS MG - Centro Universitário do Sul de Minas.

Worked As His Sister's Conditioning Coach

As already mentioned, Arthur is one of the people who could be credited for Amanda's success in the fighting world. He and his sister grew up in a fighting household, so the concept of combat sports was deeply engraved in them from childhood. Encouraged by their dad, the siblings started training at a relatively young age; Arthur joined jiu-jitsu class at two, and Amanda signed up for judo at twelve.

After winning multiple jiu-jitsu tournaments, Mr. Ribas enrolled in judo classes at eight to improve his takedowns. He soon joined the national team but couldn't save a spot at the 2012 Olympics due to a couple of knee injuries. Furthermore, as an MMA fighter, Amanda Ribas' brother won six matches at Pentagon Combat. His career's only loss was against Alvaro Correa at Jungle Fight 76.

Unfortunately, injuries again forced the emerging fighter to walk away from the sport. He then earned his bachelor's and licentiate degrees and started teaching classes in his hometown. In addition, he joined his dad, Marcelo, and became Amanda's conditioning coach. Arthur also works at Academia Ribas Family, training youngsters in the gym.

The former Welterweight fighter, who has been away from the ring since 2015, was inspired by his sister to return to MMA. After watching the lady fighter's victory over Paige VanZant, he decided to give fighting another try and signed a multi-fight contract with Taura MMA in September 2020. However, the Brazilian promotion has yet to define a location and date for his first fight.

As he has been a crucial part of Amanda's preparation for UFC bouts, the Varginha native has seen first-hand how hard she works and how it has paid off. He was hugely influenced by her and decided to end his five-year hiatus. Additionally, he is even looking forward to becoming the first brother-sister duo in the history of UFC.

Though he primarily came into the spotlight due to his connection with the UFC strawweight competitor, Arthur is an accomplished person in his own right. The judoka had a successful run in MMA with a 6-1 pro record and is now thriving as a personal trainer. So, what about his love life, has he also been successful in that department?

The answer is yes; as per his FB profile, the former MMA competitor is engaged to Amanda Lopes. According to her Facebook bio, Arthur Ribas' fiancée lives in Varginha and previously worked at Tribunal de Justiça de Minas Gerais. The pair have been dating since 2019 and got engaged on March 6, 2019. 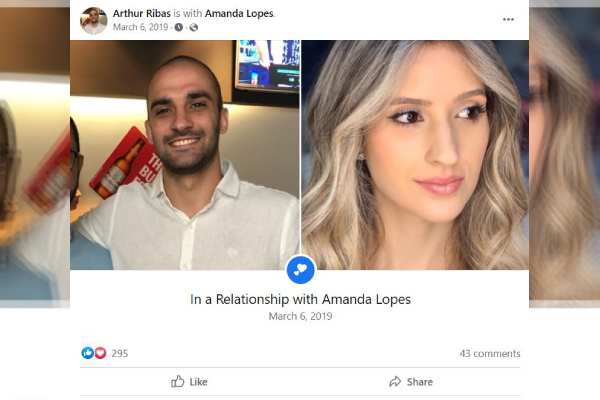 Unlike other couples, Mr. Ribas and Ms. Lopes don't share much about their relationship. Both haven't posted any pictures together and seem to prefer to keep their personal matters to themselves. Also, it hasn't been revealed when the lovebirds are going to get married.

Nonetheless, Arthur must be enjoying a comfortable life with his partner. He must be doing well career-wise too. As Amanda Ribas' brother has planned to return to MMA fighting, he is likely training hard to prepare for his upcoming match. Hopefully, he will have a glorious return and fulfill his aspiration of becoming the first brother-sister duo in UFC.