Rupa Huq Apologizes For Her 'Racist' Remark To Chancellor

Rupa Huq was administratively suspended after getting accused of making racist comments about the Chancellor.

So, what happened, and what are the updates? Let's find out!

We can see from the post by Jake Berry MP, that during the labor conference event, organized by the British Future and Black Equity Organisation, Rupa Huq made 'racist' comments about the Chancellor of the Exchequer, Kwasi Kwarteng.

Rupa Huq said that "superficially he is a black man." She said Kwarteng went to the top schools in the country. Huq also said that if one would hear him on the Today program, one wouldn't know he's black. 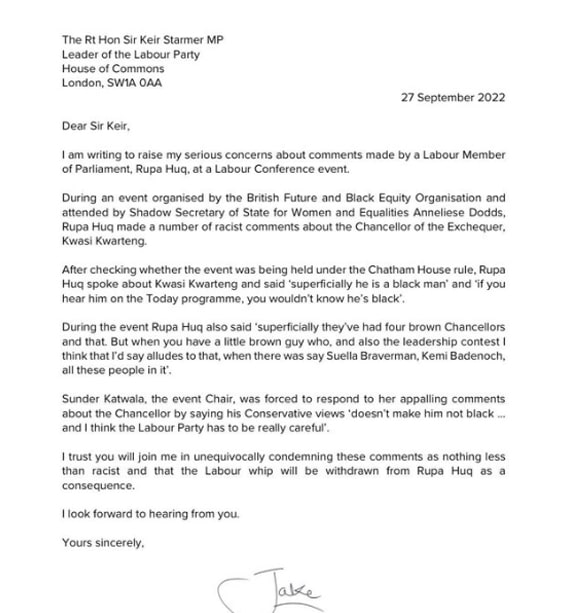 Jake Berry MP had written a letter addressing to the Rt Hon Sir Keir Starmer MP, Leader of the Labour Party, House of Commons, UK, requesting him to look into the matter and condemn the comments that Rupa Huq made as racist. And the Labour whip be withdrawn from Huq as a consequence.

Huq's remark was indeed criticized and suspended by Labour from the parliamentary party pending an investigation. Like Jake Berry, Deputy Labour leader Angela Rayner said that Rupa Huq's remarks were unacceptable. And speaking to BBC's Politics Live program that Ms. Huq should apologize.

After being accused of making racist comments, administratively suspended, and asked to make an apology, Rupa Huq acted immediately by extending her apologies to the Chancellor.

Rupa Huq MP tweets about contacting Kwasi Kwarteng to offer her Sincere apologies for her comments towards him. Source: Rupa Huq's twitter

Well, Huq's comments have garnered the attention of many and were criticized by many. We have yet to see what would be the results after her apology.

Kwasi Kwarteng is a British politician who was appointed as Chancellor of the Exchequer on September 6, 2022. He previously served as Secretary of State at the Department of Business, Energy, and Industrial Strategy from 2021 to 2022.

From 2018-2019, Kwarteng worked in Department for Exiting European Union as Parliament under the Secretary of State. Kwasi joined the Public Accounts Committee from 2016 to May 2017.

Kwasi Kwarteng worked as an analyst in financial services before he became a member of Parliament.

The current Chancellor has attended Harvard University on a Kennedy Scholarship and earned a Ph.D. in economic history from the University of Cambridge in 2000.

Living in London, Chancellor Kwasi Kwarteng is also the author of books like War and Gold, Ghosts of Empire, and Thatcher’s Trial.