Rachael Ostovich has been an inspiration for women worldwide, and it's not just for her fantastic fighting skills. She is a strong woman who hasn't let any obstacles in her life drag her down from reaching her true potential. Rachael is a fighter both in the ring and outside of it, and she poses as an excellent role model for other young women to look up to.

Being born to such an influential figure, Rachael Ostovich's daughter, Ruby Rose Berdon, is indeed lucky. She is a mini-version of Ostovich and frequently appears on her mom's social media posts. Did you know Ruby's parents are no longer together? In fact, the former pair separated on pretty bad terms.

So, who has Ruby's custody, and how is she growing up? Hence, this short article tries to cover all the essential details of little Ms. Berdon.

Her Dad Was Arrested For Domestic Violence

The beautiful girl was born on March 22, 2013, to Rachael and her ex-spouse, Arnold Berdon. The latter is an MMA fighter whose pro-MMA record is 7-2-0. Moreover, Ruby's parents tied the knot on April 4, 2016, in an intimate wedding ceremony. Both looked very happy at that time.

The Berdon-Ostavich duo's marital life seemed picture-perfect until the news about the sportswoman being assaulted came on November 18, 2018. The perpetrator was none other than Rachael Ostovich's then-husband. She sustained a broken orbital bone and other injuries. It not only caused the fighter to be hospitalized but also had to cancel her bout against Paige VanZant in January 2019.

Following the incident, Ostovich filed a restraining order against Arnold. Furthermore, Ruby Rose Berdon's father was initially charged with second-degree attempted murder, and his bail was set at $75K. As per TMZ, the latter was intending to argue that he was attacked first and was only trying to defend himself.

Eventually, Ruby's dad was sentenced to four years probation in May 2019. Around the same time, her parents' divorce decree was filed, and her mom obtained her full custody. Her father was also allowed supervised visits by a Honolulu court. Furthermore, as Rachael Ostovich's daughter was still young during that incident, she might not have understood what happened between her and her then-spouse. Still, the little girl must have been affected by their separation.

Her Mom Has Found Love Again

It takes a strong person to recover from domestic violence, and it takes even more courage to begin fresh or start a new relationship. After experiencing such a violent assault, Ruby Rose Berdon's mother initially maintained a low-key profile while taking care of her. At present, the gorgeous lady is in a loving relationship with comedian Tumua Tuinei.

It isn't exactly known when the couple started dating, however, both started posting pictures on IG in June 2022. In addition, their captions are full of appreciation for one another. Also, the former UFC fighter once shared that she was very happy to be Tuinei's partner, lover, friend, and support. She also assured him that she would always be in his corner. 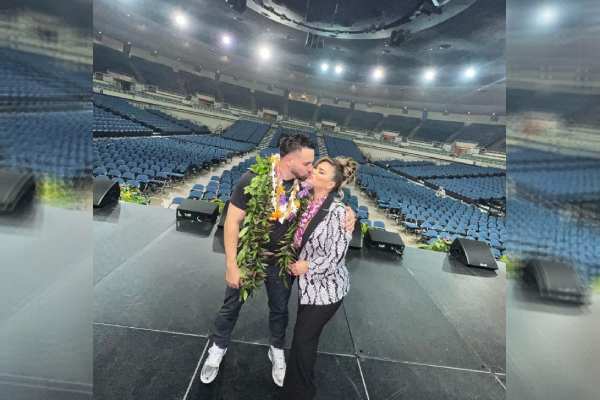 Rachael Ostovich's boyfriend is also equally supportive and calls her his soulmate. He also once wrote a short message to Ruby, calling her a talented and amazing child. Hence, it seems like Ruby has a good relationship with her mama's partner.

All About Rachael Ostovich's Daughter, Ruby

Having come into the limelight as the BKFC fighter's only child, many people must be interested in learning about Ruby. Thankfully, her mom often posts about her, and fans are able to see how the little miss is growing up. Going through her mother's posts, it's apparent that she has inherited her mom's good looks and fashion sense. Oftentimes, the mother-daughter duo is seen wearing complementary outfits.

Lovingly called RuRo, did you know the younger Berdon went viral on TikTok on her birthday? Her short TikTok clip gained 1.3 million views and many likes. Though she doesn't have a social media account, she could be famous when she has one. Moreover, Ostovich doesn't hesitate to share how her little girl means everything to her. She spends plenty of time with her baby girl and is always there for her.

Ruby is indeed lucky to have a loving mom like Rachael. As she is still young, it is uncertain whether she will follow in her mother's footsteps. Nevertheless, Rachael Ostovich's daughter has an inspiring role model like herself, and she will gain support from her no matter what career she might pursue in the future.

Overall, RuRo appears to be living comfortably with her mama. She must be focused on her studies and enjoying a happy childhood. We wish the mother-daughter duo more joy in the future.