Bernard Arnault and their family is the richest family in the world. Bernard also became the richest man alive in 2021 after surpassing Jeff Bezos. Image Source: Brittanica.

In the race to become the wealthiest person alive, a tough competition is going on between Amazon founder Jeff Bezos and Moët Hennessy Louis Vuitton SE Chairman and CEO Bernard Arnault. The two people have been neck-on-neck to become the richest man alive, and one outdoes the other at every chance they get.

Although their net worths are highly influenced by the stock market value of their companies, there is no doubt that these two wealthy men have worked hard to earn their worth.

Bernard Jean Étienne Arnault is the name and face of one of the biggest fashion labels on earth, LVMH. However, he is not the only person who controls the company as Arnault Family Group is the one that has significant control over LVMH. Thus, the Arnault family is one of the wealthiest families on earth.

So, here are five facts about Bernard Arnault and the Arnault Family.

Top 5 Richest Supermodels In The World

Being born in France, the world's fashion capital, Bernard Arnault knew of the fashion industry ever since he was a small child. Moreover, his mother, Marie-Josèphe Savinel, was very fashionable and an avid follower of Christian Dior. However, the billionaire did not dabble in the fashion until he realized how genuinely influential the industry is.

Bernard Arnault's father made a small fortune as he owned a civil engineering company and wanted his son to take his business after him. Following his father's wishes, the mogul attended the most prestigious engineering school in France, Ecole Polytechnique. He worked as an engineer in the Ferret-Savinel construction company and became the controller of the company. With some persuasion, the entrepreneur convinced his father to turn the company into a real estate-centered business.

Soon after, Arnault bought Boussac Saint-Frères, an almost bankrupt corporation that controlled brands like the French department store Bon Marche and the fashion house Christian Dior, in 1984. He changed its name to Financiere Agache and began a turnaround plan that included cost-cutting and selling its assets.

By 1989, Bernard Arnault had gained control of over 43% of the assets of LVMH (Moët Hennessy Louis Vuitton). Louis Vuitton is a fashion house named after its founder Louis Vuitton himself. Founded in 1854, it became LVMH in 1971 after a merger between Moët & Chandon, a champagne producer.

The conglomerate is mainly known for the luxury fashion brands that work under their names. Some of the leading and well-known fashion brands under the LVMH group are Bulgari, Christian Dior, Givenchy, Stella McCartney, Tiffany & Co., and Fenty.

Moreover, the multinational holding company controls subsidiaries that produce wine, champagne, and other spirits. Moreover, they have hotels, luxury yachts, patisseries, and even a financial newspaper that work under the umbrella of LVMH.

In total, the business conglomerate has 75 houses and 31 legacy houses. The oldest company among the LVMH family is a wine producer called Chateau d'Yquem, established five centuries ago in 1593. Whereas LVMH also has six brands that are less than five years old under their belt.

This big of an empire is not easy to handle. As a result, the CEO and chairman decentralized its power to its subsidiaries, bringing in a profit of 500%. Moreover, as of 2017, the principal shareholder of the company was said to be the Arnault Family Group which had over 46% in stock of LVMH and over 63% of the voting rights in the conglomerate.

In gaining control over LVMH, the engineer turned businessman has slowly allowed his family members to have a say in the multinational holding company.

Most Of The Family Involved In The Business

Bernard Arnault has five children from his two marriages. The billionaire and his ex-wife, Anne Dewavrin, have two children together: Antoine Arnault and Delphine Arnault. With his second wife, Canadian pianist Helene Mercier, he has three children: Alexandre Arnault, Frederic Arnault, and Jean Arnault.

Four out of the five of Bernard Arnault's children are heavily involved in the LVMH group. Business Insider has speculated that Delphine will soon become the heiress to the LVMH empire. She has been a member of the executive committee of LVMH since 2019 and has become the executive vice president. In addition, it has been speculated that Delphine too is a billionaire due to her heavy involvement in the LVMH company.

Just like his sister, Antoine is also looking over a portion of his father's empire. He mainly looks over menswear brands under the LVMH group and is the chief executive of the label Berluti and chairman of Loro Piana, a cashmere label. Moreover, he became the head of communications and the image of LVMH in 2018. 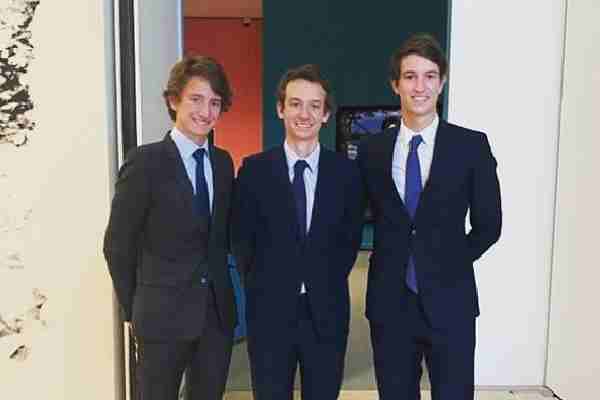 Bernard Arnault's children are working to take over the company after him. Delphine Arnault has been speculated to become the heiress of the company soon. Image Source: Alexandre's Instagram.

Similarly, Alexandre was the CEO of the German luggage brand Rimowa (also owned by LVMH). He took command of the company to become the executive vice president of product and communications in TIffany & Co. after its acquisition by LVMH in 2018.

Lastly, Frederic Arnault became the Swiss Luxury watch brand TAG Heuer's CEO in 2018. Before being the CEO, he worked as the strategy and digital director of the luxury watch brand. Before joining LVMH, he interned at Facebook and graduated from his father's alma mater, École Polytechnique.

The youngest member of the family, Jean, is the only child who has not been a part of the LVMH group. However, it is inevitable that after completing his education, Jean will join his family and run the empire together.

Bernard Arnault has very artistic taste. He is an active collector of artwork and has collected paintings from legendary artists like Pablo Picasso, Andy Warhol, Yves Klein, Henry Moore, and Damien Hirst. The business conglomerate is said to prefer modern art pieces over classical ones.

Due to his love for various art forms, the businessman has started several programs with the LVMH Corporate Philanthropy. Their primary focus is to nourish and express cultural, artistic, and humanitarian values. LVMH has had a comprehensive philanthropy program since the early 1990s. It is focused on numerous sectors, including promoting and sharing culture –with a particular emphasis on youth –rehabilitating and improving historical treasures and supporting contemporary artistic creativity.

LVMH also supports several well-known organizations for their work with children, the elderly, and persons with disabilities and their efforts to alleviate pain and marginalization. The company has also donated a lot of money to Institut Curie to research children's cancer.

Moreover, they donated $200 million to restore the roof of Notre Dame after it was destroyed in a 2019 fire. The site has a long historical and artistic value.

One Of The Richest Family

Bernard Arnault himself became the richest man globally when his net worth reached over $200 billion in 2021. However, due to the rise and fall of the stock price of LVMH, his fortune has been going up and down by a few hundred million. As a result, there has been a cut-throat competition between him and Bezos to remains the richest man on earth.

Whether he is the world's richest man or not, there is no doubt the Arnault family is the richest in the world. With 46% in the LVMH holding company stocks, their worth has been skyrocketing over the past several years. Moreover, the children have their own earnings and are all multi-millionaire and even billionaires due to their own positions in the company. 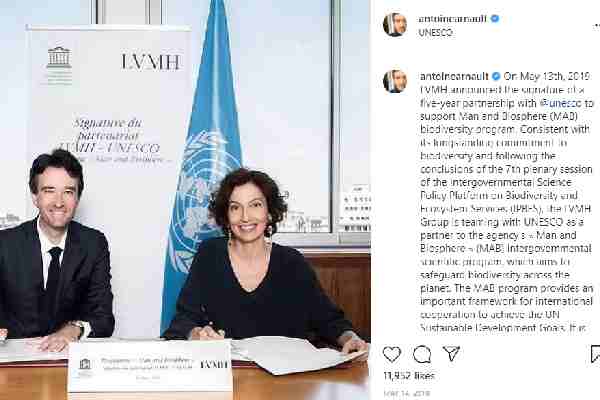 Being one of the richest family in the world, the Arnault family has contributed to several charities and humanitarian organizations. Image Source: Antoine's Instagram.

There are no signs that the ever-evolving world of fashion and makeup will come to a halt anytime soon. Moreover, with renowned celebrities like Rihanna opening a beauty and fashion brand under the LVMH umbrella, there is no doubt that the LVMH company will continue to attract new customer bases in the future.