Jeff Bezos made billions as the founder and CEO of the multinational company Amazon. Image Source: Social Media.

Multi-billionaire Jeff Bezos is one of the most influential men in the business world. He is the founder and outgoing CEO of the popular multinational technology company Amazon. Bezos started his company in 1994 as an online store for books, but it has since established itself as the world's largest marketplace.

The founder of Amazon has found immense success as a businessman and is the first person to be worth $200 billion. Because of the vast wealth he amassed from his career, Jeff Bezos' biography and life story is the most talked-about topic in the world. So let's get to know more about one of the richest men in the world.

Jeff Bezos was born Jeffrey Preston Jorgensen, on the 12th of January, 1964, in Albuquerque, New Mexico. Bezos's mother, Jacklyn Gise, was just seventeen when she gave birth to him, while his father, Theodore Jørgensen, was nineteen. His parents divorced when he was just one and a half years old, and Jacklyn raised him as a single mother. She used to bring little Jeff along while attending night classes at college.

Jeff Bezos's mother met Cuban immigrant Miguel "Mike" Bezos at one of her classes, and the pair started dating. The pair got married in 1968, and Mike adopted Jacklyn's son soon after, and Jeff's surname was changed. The Bezos family moved to Houston, Texas and Jeff attended the River Oaks Elementary School there. 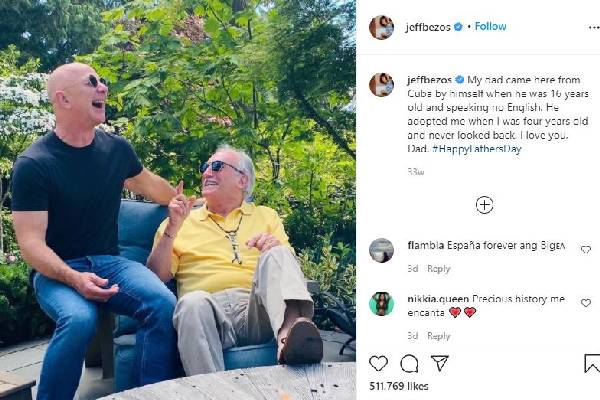 Jeff Bezos was adopted by his stepfather, Miguel Bezos, and shares a close bond with him. Image Source: Jeff Bezos Instagram.

The family then moved to Miami, and while attending high school there, Jeff fell in love with computers and their function. He had varied scientific interests and apparently rigged an electric alarm just to keep his siblings, Mark Bezos and Christina Bezos, out of his room. Even though he did not want his siblings in his room as a child, the trio shares a close relationship now.

While the billionaire shares a close relationship with his mother and adoptive father, his biological father is a different story. After Bezos' parents divorced, he had no contact with his father. According to Business Insider, Theodore Jørgensen did not even know that his estranged son was the business tycoon and founder of Amazon.

While Jeff Bezos was still in college, he was offered jobs at various companies, including Bell Labs, Andersen Consulting, and Intel. His first job after college was a fintech telecommunications start-up called Fitel. He was tasked to build a network for international trade and was promoted to head of development and then to director of customer service. Bezos then worked in the banking industry and at one point involved in the hedge fund.

After working for various companies for years, Jeff Bezos had the idea to establish an online bookstore. He had been working at D. E. Shaw & Co at the time and left the job to establish Cadabra. He planned on expanding the business and also include other products in the online store. 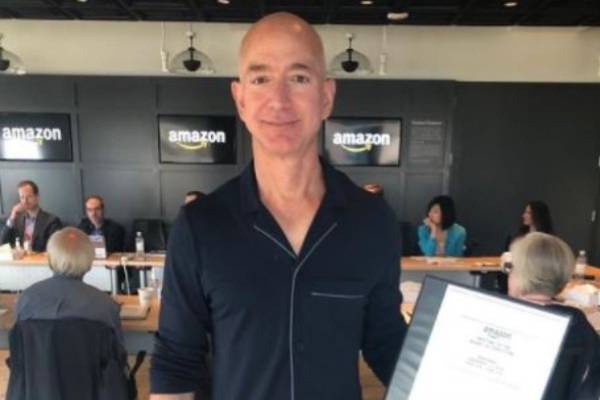 A few years after it was founded, Amazon started the online sale of music and video, and by the end of 1998, various consumer goods were also available for purchase on the site. After the launch of Amazon Web Services, the company nearly went bankrupt. However, Bezos closed distribution sites and also laid off a significant number of people.

Since then, Amazon has continued to expand and was named the largest online shopping retailer in October 2013. As per Amazon, the company currently operates in fifteen countries, including the USA, Mexico, Brazil, Japan, Netherlands, and few others. Now, it is one of the biggest businesses in the world and has helped employ thousands of people.

Jeff Bezos stepped down from his role as the CEO but is still involved in the company as the executive chairman. This change will undoubtedly help the company grow more in the coming days. Bezos also owns the daily newspaper, The Washington Post, and Blue Origin, an aerospace manufacturer.

Jeff Bezos Net Worth And Assets

Jeff Bezos is recognized as the first centibillionaire and has topped the richest man list for many years. He had an estimated net worth of $150 billion in 2018 and, as a result, was named the richest man in modern history. According to Forbes, Bezos' net worth in February 2021 is estimated to be $194.7 billion. In 2020, his net worth crossed the $200 billion mark, and he became the first person to do so.

Much of Jeff Bezos' net worth comes from Amazon, and he has invested millions in several properties around the US. As per Business Insider, Bezos purchased three adjacent apartments in New York City. He reportedly paid $80 million for the condo in June 2019.

A year later, Bezos also bought a nine-acre property from the billionaire David Geffen in Beverly Hills. He paid $165 million for the estate, making it the biggest transaction in the neighborhood's history. The amount he has invested in these assets shows the lavish lifestyle the billionaire enjoys.

In addition to his wealth, Jeff Bezos' personal life is also a topic of interest for people around the world. He was previously married to MacKenzie Scott for more than two decades. Bezos and Scott met when they were working at D. E. Shaw and got married after dating for three months. The pair moved to Seattle, Washington together, and MacKenzie was by her husband's side while Amazon gained success.

During their two-decades-long marriage, Jeff Bezos' wife, MacKenzie Scott, gave birth to three sons and the pair also adopted a daughter from China. Among Bezos' four children, only his oldest son, Preston Bezos, has been introduced to the media. His three younger children's name has not been revealed yet.

After twenty-six years of marriage, Jeff Bezos and MacKenzie Scott separated and announced the news to the world. They went through a high-profile divorce proceeding that involved the multinational company Amazon. As divorce settlement, Jeff Bezos' ex-wife, MacKenzie, walked away with 25% or $35.6 billion of the couple's Amazon stock. Scott then became one of the richest women in the world but has pledged to donate most of it to charity.

Jeff Bezos has since moved on and is now in a relationship with television host and helicopter pilot, Lauren Sanchez. Their relationship became public only a few hours after the news of Bezos and Scott's separation. Years later, Bezos and Sanchez are still together and enjoying their time together.