Nikoloz Basilashvili is a notable name in the professional tennis scene. He made his Grand Slam debut in 2015 and since has participated in ATP tours and other tournaments. Moreover, the player has also participated in the 2016 Summer Olympics in Men's Singles category. Nikoloz is best known for his right-handed serve and two-handed Backhand.

The sportsman got his first ATP title in 2018 after defeating German player Leonardo Mayer in the finals. He has recorded ninety-eight career winnings as of now. In addition, the athlete got a high rank for singles and doubles on the same day on May 27, 2019. He has won many titles in both categories as well.

So, here we will go through Nikoloz Basilashvili's biography and learn more about his family, career, and love life. 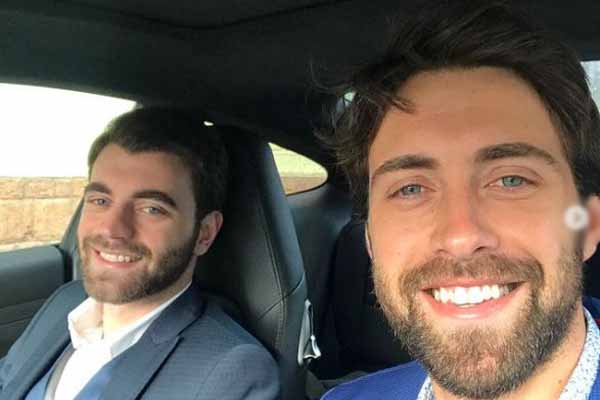 The athlete has been passionate about tennis as a young boy and he was holding a tennis racquet by the age of five. Moreover, Nikoloz Basilashvili's father, Nodar, used to play tennis with him. He also got trained in Sacramento, U.S.A, from 2007 to 2011. In addition, the young athlete and his family moved to Russia with his family at the age of fifteen; as such, he is also fluent in Russian.

There is not much information about Nikoloz's education. But, considering his training period, he must have attended school in the States. Additionally, the sportsman might also have enrolled in a Russian school.

The tennis player began playing in the junior section at the age of fourteen. He debuted in the 2006 G2 Jerry Simmons Tournament in late 2006. But, sadly, the young Nikoloz lost in the qualifying round. However, he passed the qualifying rounds in the G4 tournament in Israel and the G3 championship in Romania in 2007. But, he was unable to snag a win.

The Georgian player teamed up with Patrick Daciek at the 2007 US Junior Hard Court Championship. The duo reached the semifinals but ultimately lost the match. Additionally, Basilashvili also reached a semifinal in singles at the G4 USTA in Illinois. But, unfortunately, he lost the title to Serbian professional player Filip Krajinovic. 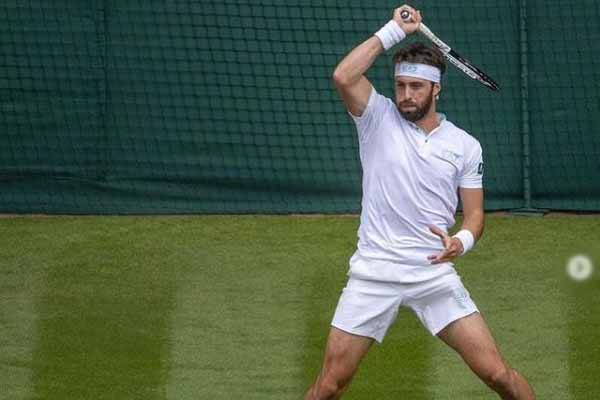 However, the junior player didn't give up and trained even more diligently to show better performances. As a result, he got his first title by defeating American player Raymond Sarmiento in the 2008 G4 Tennis Express Tournament. Moreover, the sportsperson also competed in the 2008 Orange Bowl championship.

It was Nikoloz's last match as a junior player, and he finished it in the quarterfinals.

The sportsman went on hiatus for several years before making his return on the field. He made his Grand Slam debut in the 2015 French Open. But, sadly, he lost the first round to Thanasi Kokkinakis. Furthermore, the former champion appeared in the 2015 Wimbledon, where he advanced to the third round after beating Facundo Bagnis and Feliciano Lopez.

Moreover, Basilashvili also qualified for the 2015 U.S. Open but was defeated by Feliciano in the first round.

Nikoloz Basilashvili participated in his first Australian Open in 2016. However, he couldn't withhold the strikes of Roger Federer. Still, the tennis athlete improved himself in the 2016 Austrian Open Kitzbuhel. He got to the finals for the first time in his ATP career. But, Nikoloz was unable to defeat Paolo Lorenzi.

In the last half of 2016, the sports personality was able to turn the table in The Vienna Open. He got his first victory after defeating Czech professional player Tomas Berdych. Moreover, Basilashvili continued his good scores in the 2017 Memphis Open. He was able to gain victory over Ivo Karlovic but eventually lost to Ryan Harrison in the finals. Still, the professional player got the career-high single ranking of 51, in June 2017.

The sports athlete qualified for the 2018 Hamburg European Open. It was one of the most notable games of his career since he won his first ATP title. Moreover, the sportsman also became the first Georgian player to win an ATP title after Alex Metreveli. In addition, he also scored the 35th position in the world standings.

Basilashvili's winning streak continued in the second half of 2018. He participated in the 2018 China Open in October 2018. Furthermore, the tennis pro was full of confidence and calm-headed in his match. As a result, he won his second ATP title by defeating Juan Martin del Potro. 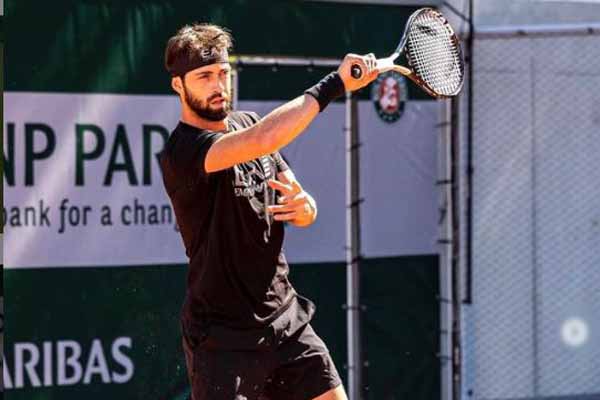 The Georgian tennis player had an average performance in 2019. He was able to win over Hyeon Chung before losing to Márton Fucsovics at the ATP 500 Tournament. Additionally, Nikoloz couldn't move to the finals in the 2019 U.S. Open. He won the first and second rounds by beating Fucsovics and Jenson Brooksby but couldn't overcome Dominik Koepfer in the third round.

The year 2020 was also not favorable for the former ATP winner. First, he lost to Fernando Verdasco in the 2020 Australian Open. In addition, the former champ couldn't move forward than the first round in the 2020 U.S. Open after losing to John Millman.

Nikoloz Basilashvili had tremendous pressure after the constant defeats and losses. Still, the tennis pro made a solid comeback in the 2021 Qatar Open with a strong determination. He made up for his former defeat against Millman and additionally got victory over Malek Jaziri and Roger Federer to reach the quarterfinals.

Furthermore, the Georgian athlete had the upper hand against Taylor Fritz in the semifinals. He eventually got the title after winning over Spanish professional tennis player Roberto Bautista Agut.

The Tbilisi native got his second win of the year in the 2021 BMW Open. He defeated Daniel Elahi Galan to reach the quarterfinals and Casper Ruud in the semifinals. Moreover, the champ eventually won with a 6-4, 7-6 margin against Jan-Lennard Struff.

Nikoloz Basilashvili is currently participating in the 2021 Wimbledon. He had his first match against the two-times champion Andy Murray on June 28, 2021. Moreover, the game went on for four rounds and lasted for three hours and thirty-two minutes. Sadly, the Georgian player faced loss against Andy with a 6-4, 6-3, 5-7, and 6-3.

Still, the ATP former champion teamed up with Radu Albot for men's doubles on July 1, 2021. But, unfortunately, the pair lost against Stefano Travaglia and Márton Fucsovics. Moreover, Basilashvili also lost to Andrey Rublev in the semifinals of the 2021 ATP 500 in July 2021.

Nikoloz Basilashvili Net Worth And Earnings

The sports personality's career has seen several ups and downs. Still, he is continuously pushing himself to perform better. As a result, the tennis player has accomplished both fame and fortune in his career. Furthermore, he has earned $6,342,587 in prize money throughout his singles and doubles career. 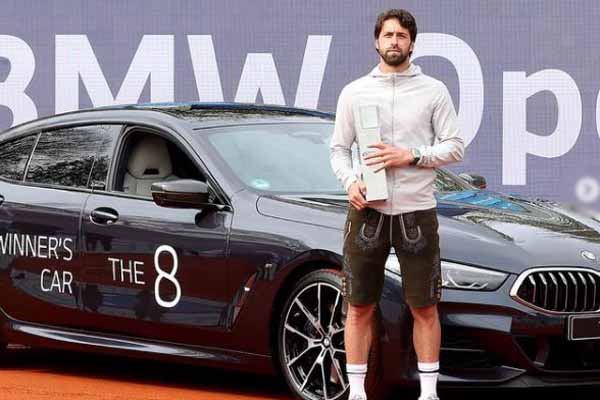 The Munich champion has promoted several brands and products throughout his career years. He has signed a deal with Lotto Sport Italia for apparel. Moreover, Emporio Armani customizes the player's tennis clothing. In addition, he is also endorsed by Lenovo U.K. and Ireland, Astonish, Gerald Charles, Nike, etc.

As for Nikoloz Basilashvili's rackets, he uses an Austrian manufacturing company, HEAD Tennis' products. He plays with a head gravity racket called TGT344.3. Moreover, the tennis pro has used this racket for several years, and it is not available for sale in the market. The specifications of his tennis racket are tabulated below:

The rising tennis star is undoubtedly earning a massive amount of money with his sponsors and endorsements deals. So, Nikoloz Basilashvili's net worth might see considerable growth in the future.

In addition to being a professional player, the ATP champ is also a family man. He always values his family and considers them his main priority. Sadly, the marital life of the Georgian player couldn't go on smoothly. He was married to his wife Neka Dorokashvili in 2013.

Additionally, the athlete had credited his wife for the success of his career. Moreover, the couple welcomed their baby boy Lucas Basilashvili on May 4, 2015.

The marital life of Basilashvili looked perfect on the outside, but many troubles had begun to weaken their connection. As a result, the pair separated in 2019. Furthermore, Nikoloz Basilashvili's ex-wife Neka Dorokashvili asked for alimony of $100,000 from her ex-husband. She also got custody of their son Lucas Basilashvili.

Nikoloz had a busy year in both 2019 and 2020. He also competed in the biggest tennis tournaments. In the midst of this, Basilashvili was arrested by Georgian cops on May 22, 2020. He was slapped with domestic violence charges against his ex-wife Neka Dorokashvili. Furthermore, the former champ was accused of assaulting his ex-partner in the presence of a minor.

Nikoloz Basilashvili denied the accusations and was released on bail of $31,300 (100K Georgian Lari). He also intends to sue his ex-wife for defamation after the completion of the police investigation. However, the final hearing of the court has yet to be held. 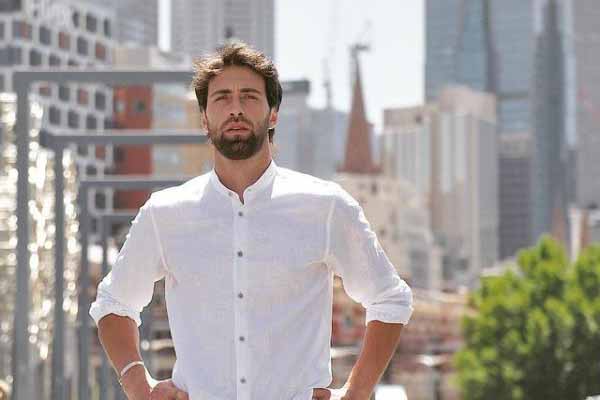 Furthermore, the tennis player was again accused of not paying alimony payments and carrying out economic violence against his ex-wife in March 2021. Neka Dorokashvili's lawyer Ana Abashidze claimed that the tennis pro hasn't paid the alimony for a year and a half. She also accused him of depriving his child, Lucas, of a home. Furthermore, human rights activist Baia Pataraia also supported her statement and gave her own input.

The statement was refuted by Nikoloz Basilashvili's lawyer Irma Chkadua by saying both mother and son are economically secured. He also denied the later accusation by pointing out how his client provided them a million-dollar worth of property, including residential and commercial space. Moreover, Irma also spoke against Pataraia in his statement.

The matter is still not cleared out correctly, with both parties supporting their own claims. Hopefully, the ex-couple will be able to sort out their problems in the future and raise their son in a loving environment.

Emma Raducanu, one of the rising tennis players, has received good popularity from her ...

Denis Shapovalov is a Canadian professional tennis player and rapper. He is one of the ...