Felix Auger-Aliassime is one of the most promising tennis players in the world. Photo Source: Felix's Instagram.

Tennis, be it lawn tennis or table tennis, is a game enjoyed by many people worldwide. Many tennis players have gained loads of fame and money because they were good at playing the game. One of the up-and-coming tennis players is F. Auger-Aliassime.

Felix has been playing tennis since he was a toddler and has now managed to become one of the most promising professional players in the world. The athlete has performed exceptionally in many of his games and has ranked in the 15th position on the ATP tour. He is primarily a singles player who also has one of the best coaches out there.

Now, let's learn more about the life of Felix Auger-Aliassime.

Felix, His Family, And Tennis

Even since the brother-sister duo was young, they had an interest in tennis. Felix and Malika started playing the sport under their father's guidance when they were only 4 and 6 years old, respectively, at the Académie de Tennis Hérisset-Bordeleau located in Quebec. The siblings fell in love with the game, and both dreamed of becoming professional players someday. 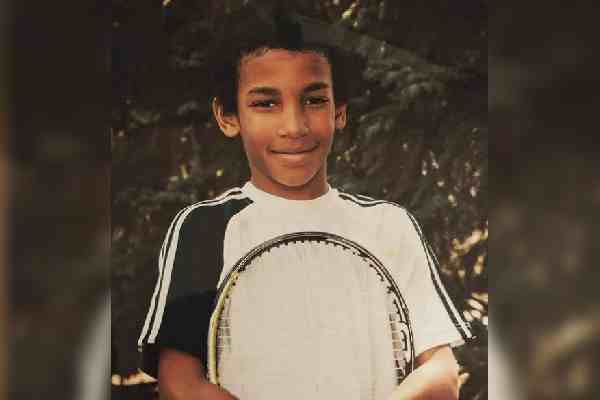 Felix Auger-Aliassime was introduced to tennis when he was only four years old by his father and he has been playing the sport since. Photo Source: Felix's Instagram.

After years of hard work and hundreds of hours practicing, the Auger-Aliassime siblings got the chance to play in tournaments. Malika did try out for the junior matches in 2015 but did not qualify for the games. The young woman was not able to make it as far as her younger brother did.

On the other hand, Felix was able to shine on the field. Starting in juniors the same year as his sister applied for, the athlete worked hard to climb the ladder and made it up to nationals and even in the Association of Tennis Professionals games.

Playing the game since one's early age is sure to have its advantages, which is probably why Felix Auger-Aliassime is one of the most promising players today. He is expected to become one of the top players in the near future. So, let's take a look at his career so far.

In 2016, with his win at the ITF Futures, the young athlete won his first professional title. Thus, began his professional journey. In the year 2017, Felix won several ATP Challengers titles and ranked in the top 200 list. The following year, the sportsman saw tremendous improvement in his play and continued to secure several ATP titles in the singles and doubles categories.

2019 became one of the best years yet for Felix. He was able to make it into several of the ATP Finals. Sadly, the pro athlete fell short of winning any of them. In the following year, the player could not play as many games due to the pandemic.

However, he did manage to win his first doubles title at the Bett1Hulks Indoor Tournament with his partner Hubert Hurkacz. Sadly he could not repeat the same victory in the singles event and lost to fan favorite, Alexander Zverev.

The Canadian athlete left behind his previous coach Guillaume Marx and hired Toni Nadal as his new coach in 2021. Moreover, according to the official ATP Tour website, Frederic Fontang is also one of Felix Auger-Aliassime's coaches.

The Montreal native has seen a vast improvement in his play since his debut. As of August 2021, he ranks at number 15 in the ATP rankings. However, Felix Auger-Aliassime is expected to be in the top ten soon.

Auger-Aliassime Net Worth And Earnings

F. Auger-Aliassime's net worth is estimated to be of an incredible amount, thanks to his many sponsorships, partnerships, and tournament wins. In addition, the young athlete has been able to amass a considerable sum of money due to his athleticism.

According to the ATP Tour website, Felix Auger-Aliassime has won $4,393,274 (singles and doubles combined) in prize money alone. Moreover, the tennis player made approximately $1.2 million in the first eight months of 2021.

As he is a talented young man with a promising career in the sport, the amount earned by the sportsman as prize money is expected to rise exponentially in the years to come.

However, prize money is not the only source of income for any athlete. Many famous players are presented with brand deals that sponsor them in specific ways. Sometimes it is just sponsorship, whereas sometimes, named brands collaborate with sportspeople to release merch or sports items.

Due to his rise in popularity and being one of the most promising players, Felix has managed to land several brand deals. The sportsman made an apparel deal with Adidas. The deal was made in 2021, prior to the Australian Open. Before Adidas, Auger-Aliassime had a deal with its competitor Nike. 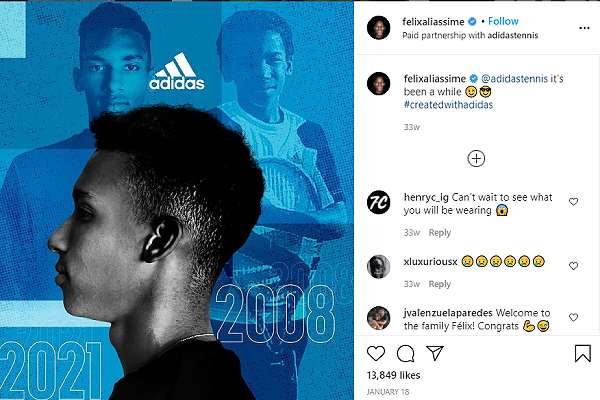 Felix Auger-Aliassime has been a promising player since the very beginning and thus has managed to secure himself several brand deals. Image Source: Felix's Instagram.

As he is a promising tennis player, Felix has been sponsored by the racquet company Babolat. The young player has been seen utilizing their equipment several times. With endorsement deals with such big companies, F. Auger-Aliassime's net worth is bound to increase in the coming days making him a multimillionaire.

In 2020, Felix Auger-Aliassime showed how big his heart was when he collaborated with BNP Paribas. As per his commitment, the tennis player is set to donate $5 for every point he scores throughout the rest of his career, and BNP Paribas will add $15 to each of that $5. Similarly, if the athlete wins a game, $80 will be donated, $600 for each set, and finally, $1,000 for each match won.

The money raised by the effort with be donated to the EduChange Program. The program is working hard to better the education and protection of children in F. Auger-Aliassime's father's home country of Togo. This shows that not only is the 6 feet 4 inches tall athlete a talented player but also a decent human being.

Felix Auger-Aliassime Is In A Relationship

As a young athlete, it is only normal for Felix to have several admirers. However, there will be several broken hearts when they find out that the tennis player has a girlfriend.

Felix Auger-Aliassime has been in a relationship with a beautiful woman named Nina Ghaibi. The couple has been dating since March of 2019, and they could not be more in love. Both Nina and Felix love posting pictures of one another on their social media with sweet captions, leaving many swooning. 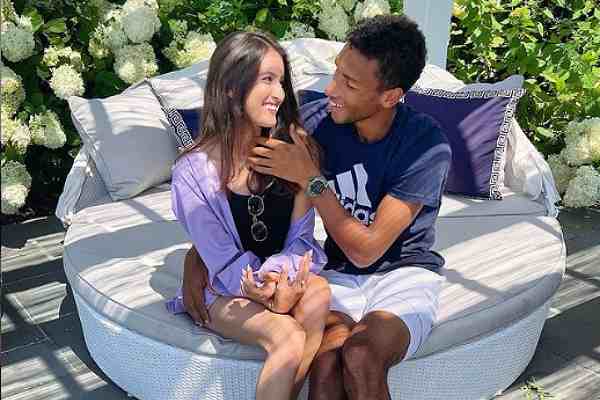 Felix Auger-Aliassime has been in a blissful relationship with Nina Ghaibi since 2019. Photo Source: Nina's Instagram.

Moreover, F. Auger-Aliassime's girlfriend is extremely supportive of him, and she loves to attend his games and cheer him on. Furthermore, the beautiful couple has enjoyed several romantic vacations together to many beautiful places, including Paris. The lovely pair seem to be in a blissful relationship.

Seeing how much they love one another, we certainly hope they get to live their lives together. Felix and Nina make a fantastic couple, and many people have been left wondering when they will find love like that.