The World Touring Car Cup (WTCR) has much impact in Europe, considering it originated there. So, it's no surprise to see many European racers debuting in the touring car series each year. And joining the bunch is the professional racer Yann Ehrlacher.

The driver began his WTCR journey in 2017 and has remained a constant presence since. His speed and incredible racing skills have made him the face of the championship. Furthermore, the racer is a two-time World Touring Car Cup champion. He is one of the emerging figures in the league.

So, let's learn more about this rising racing star's family, career, salaries, and relationships in this biography.

Yann Ehrlacher Hails From A Family Of Athletes

The professional racer was born on July 4, 1996, in Mulhouse, France. He comes from a home of athletes who made him interested in sports from a young age.

However, it was Yann Ehrlacher's uncle, Yvan Muller, who inspired him to pursue racing. The latter is a four-time World Touring Car Champion. In addition, Yann followed and learned from his uncle from a young age. He also took him as his advisor after starting his racing career. 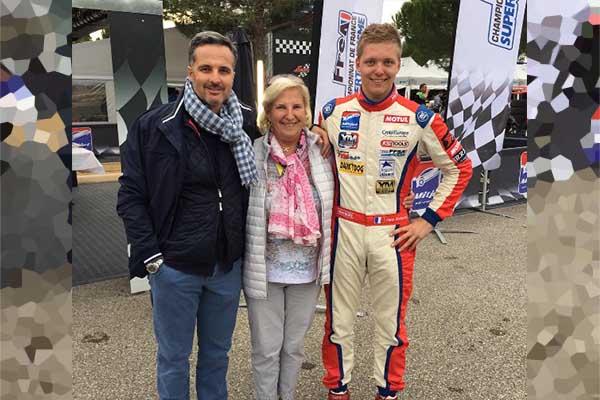 Likewise, Yann Ehrlacher's mother, Cathy Muller Ehrlacher, is a former race car driver who raced in Junior Formula races, Formula 3, Formula 3000, Sportscar Championship, etc. She was pregnant with her son when she won her final race.

The driver has a younger sister named Julie Ehrlacher. She graduated from Ecole Hoteliere De Lausanne in 2022.

Yann hasn't revealed much about his educational background. But, he must have completed his primary schooling in his hometown.

Yann Ehrlacher Net Worth And Career

Unlike other racers, Yann didn't start his career by karting. Instead, he chose to skip karts and made his debut in Volkswagen Scirocco R-Cup in 2013. Later, he began contesting in the MitJet 2L series with his uncle's Yvan Muller Racing Team.

So, Yann Ehrlacher's net worth is heavily influenced by his racing career. It comprises his income from his races, endorsements, sponsors, etc.

The French native raced for RC Motorsport and All-INKL.COM Münnich Motorsport for his first two WTCR race seasons. Then, he switched to the Cyan Performance Lynk & Co. team in 2019 and soon began winning the tournaments.

The racer's first WTCR title came in 2020 when he won three races. He successfully defended his championship in 2021 with two race wins. Another driver who races for the Cyan Racing Team is Thed Björk.

Let's see some of Yann's races and his positions below:

Thus Yann Ehrlacher's net worth must be a notable amount from his racing career.

Is Yann Ehrlacher In A Relationship?

The French driver has won many people's hearts with his fantastic racing skills and accomplishments. His two WTCR title wins at such a young age is truly inspiring. In addition, his dedication to motorsports has increased his popularity.

Yann's fans are always eager to know more about him professionally and personally. They are also curious to learn whether he is seeing anyone. So, who Yann Ehrlacher's girlfriend or partner is is often the top search on the Internet.

Well, the WTCR champ hasn't been so forthcoming in talking about his private matters. He hasn't shared whether he is dating anyone or is already in a relationship.

Similarly, the racer's social media accounts don't hint about his partner. So, Yann Ehrlacher's girlfriend is a mystery among his fans. He might have kept her a secret to avoid media scrutiny.

Or it is also likely that Ehrlacher is enjoying a single life while prioritizing his racing career. Nonetheless, going through his Instagram posts, he is enjoying a happy life with his family.

Hopefully, the race car driver might someday reveal his lady love in the future.