The German racing driver Sophia Flörsch is one of the few female drivers able to stand out and rise to prominence in the male-dominated motorsports sector.

After surviving a horrible crash in the 2018 Formula 3 Macau Grand Prix, Sophia Flörsch rose to the limelight with her brave comeback on the track. In addition, the spunky driver isn't hesitant to speak about the prejudices shown by the media and brands in promoting female racers, and she frequently finds herself embroiled in controversies as a result.

As Sophia continues to collect fame with her daredevil acts, motorsports fans are eager to learn more about this charming personality. Stay with us until the end as we go through Sophia Flörsch's biography in brief.

Sophia Flörsch aka Sophia Floersch was born in the Grünwald municipality of the Munich district on 1st December 2000. She spent most of her childhood around Munich while attending Grammar School Oberhaching there.

Sophia Florsch's father, Alexander Flörsch, who followed karting as a hobby, encouraged her to pursue professional racing as a career. Her mother, Susanne Flörsch Painhofer, also supported the idea. Consequently, she began kart racing at just the tender age of 4 and trained laboriously since her early years.

Sophia often shares photos of her younger sister Laetizia Flörsch on Instagram with whom she shares a loving bond. However, it is unclear if she shared Sophia's love for high-speed sports.

Sophia Flörsch's family motivated her to pursue her dream as a racer since she was a child. Photo Source: Sophia's Instagram.

In an interview with Good Morning Britain, Sophia mentioned that she trained and grew up alongside Mick Schumacher, the son of seven-time Formula One world champion Michael Schumacher.

Career And Hurdles Along The Way

After being exposed to karting in 2005, the Formula driver competed in several karting events across Europe between 2008 and 2014. Moreover, she became the first female driver and the youngest driver to compete in the 2008 SAKC Championship, 2009 ADAC German Championship, and 2010 European Championship Easykart. 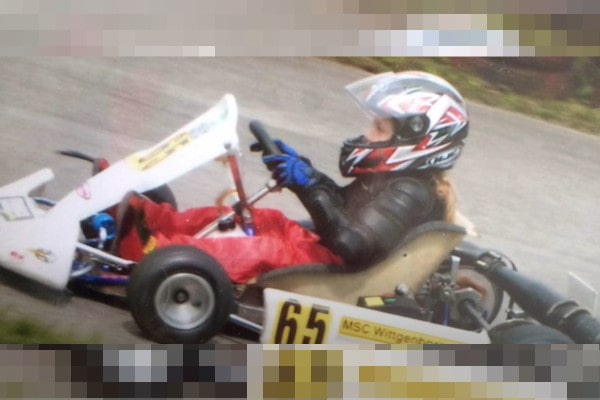 The young talent was backed up by popular energy drink Red Bull at the time.

After achieving decent results in karting, Flörsch naturally progressed to automobiles and drove for HHC Motorsport in the Ginetta Junior championship in 2015. Throughout the season, she was able to earn two victories and two podium finishes. Furthermore, the German driver made double history at the Thruxton circuit by being the first rookie to win two races in one weekend and the youngest driver to win the Ginetta Junior event. 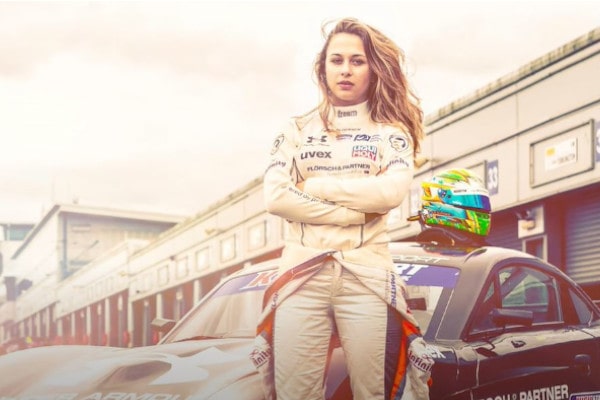 Sophia was able to show her talents as a emerging driver in Ginetta Junior Championship and showed a promising future ahead. Photo Source: Social Media.

Despite producing remarkable initial results, Sophia had to cut her season short due to financial problems. As it was getting increasingly expensive for young drivers to ascend into single-seat ranks, Flörsch needed sizable funds to continue the season.

Unfortunately, no brand was ready to sponsor the emerging talent, and she had to quit the championship mid-season.

Sophia competed in the ADAC Formula 4 competition as a Motopark representative in 2016. In her debut race, she became the only female driver to ever score a point in the event. The following year, while racing with BWT Mücke Motorsport, she earned two podium places and two fastest laps.

The German driver Sophia made her first appearance in the F3 race when she participated in the FIA Formula 3 European Championship as a test driver on 13th March 2018. Van Amersfoort Racing soon confirmed that she would be joining the team as one of their drivers. Sophia finished the season in 22nd place.

In 2018, Sophia Flörsch became the first female German to compete in the Macau Grand Prix. Everything seemed to be going well for the teenage driver until she suffered a terrible accident on the fourth lap of the Formula 3 race.

Later on, Sophia revealed that she had lost control of her car at the speed of 170 miles per hour before hitting rival driver Sho Tsuboi and going airborne to smash into the safety fence. Somehow, she miraculously survived the crash, despite suffering a shattered spine.

Following an 11-hour surgery, Floersch's father, Alex, reported that her condition had stabilized and there was no immediate threat. The racer spent a couple of weeks at the hospital before returning home, and shockingly, just after four months of her collision, she was back in the driver's seat.

Sophia was awarded the World Comeback of the Year at the 2020 Laureus World Sports Award. 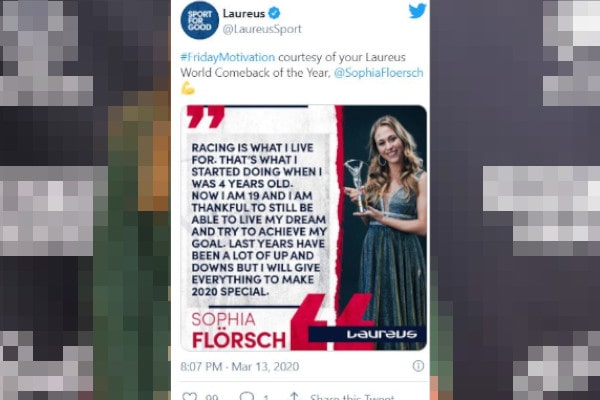 The German driver said in an interview with CNN,

"It was always clear to come back, to drive again, to race again, and to fight for my dream."

Following Sophia's return to the profession, the daring driver competed in multiple prestigious events, including the 2019 Macau Grand Prix, the FIA F3 Championship, and the 2020 24 Hours of Le Mans.

Sophia Flörsch Net Worth And Earnings

With all of her international fame, admirers are anxious to learn about Sophia Flörsch's net worth and earnings. The fiery driver has not only established herself as a leading persona, but she has also amassed a sizable fortune thanks to her motorsports career.

Although Sophia has not officially disclosed her assets, we can infer she has accumulated a reasonable amount of wealth due to her multiple sources of income.

The blonde driver has competed in many national and international racing events. As she took part in the motorsports championship from an early age, her fortune primarily consists of winnings from these events.

From karting to single-seater racing, Sophia has secured multiple podium finishes and first place in the standings. Additionally, she has represented several racing teams throughout her career. The average salary of a race car driver is around $40,000. Given Floersch's stardom and accomplishments, she must get paid around the same range.

Well, Sophia runs a YouTube channel where she regularly updates her subscriber about her racing endeavors. As of July 2021, she has over 75K subscribers and more than 4 million views in total.

According to Social Blade, Flörsch's channel's estimated revenues range from $31 to $501 per month, depending on views for that period. And the estimated yearly earnings is between $375K to $6K.

The race car driver must have made few large bucks from her YouTube channel, considering her subscriber and views count.

As Sophia continually grows her fame in the motorsports industry, many international and national brands have approached her. She endorses products of these brands and gains funds in return.

Popular companies like Husges Gruppe, Under Armour, Hoflinger Mulle, Arai Helmets, Forca Sport, and others have sponsored Sophia throughout her career.

Sophia Flörsch's net worth must have taken a rise as she earns regularly from these brands.

Is She Dating Anyone?

As the German female racer continues to post sizzling photos of herself on Instagram, her followers are curious to know about Sophia Flörsch's boyfriend and relationship status. However, sadly, the blonde beauty has not revealed anything about her partner yet. 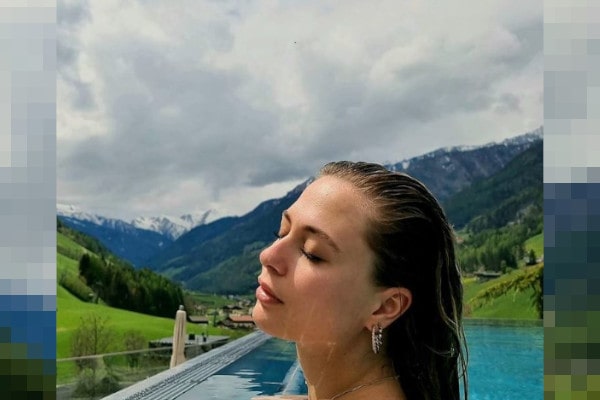 Sophia at the moment seems to be enjoying her single life very much. Photo Source: Sophia's Instagram.

There is no mention of Sophia's romantic endeavors on the internet, and also no indication of love life on her social media accounts. Furthermore, Sophia is focused and devoted to her dream of becoming an F1 champion, and it is quite possible she is single at the moment.

So, we might have to wait a couple more years before finding out more about Sophia Flörsch's boyfriend.