Sebastien Buemi has been racing since he was eight years old after his dad gifted him a kart car when he was five. Image Source: Sebastien Buemi Instagram.

Sebastien Buemi is a Swiss race car driver famous for racing in Formula One and winning the FIA World Endurance Championship. Having won the endurance title two times and Formula E once, Buemi rose to fame in the racing world. With experience in Formula One racing, Sebastien has managed to achieve great things. He, like almost all other racers, started from karting and has been a familiar name ever since.

With the ever-growing popularity of car racing over the years, fans are eager to learn more about Buemi's day-to-day life. He has established himself as one of the top racers in the world, so people are curious about how he handles pressure from fans and critics and how he balances his personal life along with it. So, in this biography, let's talk more about Sebastien Buemi's rise to fame and the success that has followed him.

Grandfather Was A Racer

The racer was born Sébastien Olivier Buemi on October 31, 1988, to Swiss parents Antoine Buemi and Veronique Buemi in Aigle, Sweden. Sebastien Buemi's father and mother are very supportive of his career and have attended many of his races too. The former and other members of his family often talk about how much the couple sacrificed for their son's dream of being a race car driver.

Buemi's maternal grandfather, Georges Gachnang, was also a racer. He used to race in many circuits when he was working as a Toyota mechanic for fifty years. Likewise, Sebastien Buemi's parents were VW dealers in Aigle and owned a body shop.

Sebastien Buemi's father was a mechanic and still has the garage, where his mother and brother also work. Additionally, when Buemi was five years old, he was gifted his first kart by his dad which began his car racing journey. Moreover, the racer traces his ancestry back to Italy as his great grandparents were Italians, and claims he was brought up in the culture of community bonding.

Sebastien Buemi Net Worth And Career

Three years after getting his first kart, Sebastien started his racing career at the age of eight. It took him a year to win his first title as he claimed the Swiss Minis Championship, followed by four Swiss Karting titles Mini, Mini90, and SuperMini, among others. With one championship win along with 13 total victories in Formula E, Buemi has certainly amassed a considerable sum of amount. Thus, Sebastien Buemi's net worth must be immense.

The driver has had plenty of achievements in his career so far. From winning the European Kart Championship in 2002 to the Italian Kart Championship a year later, he established himself as an excellent kart racer. He also won the BMW Scholarship title near the end of 2003 and got the funds that would help him compete in the 2004 Formula BMW Championship. However, he finished third behind runner-up Sebastian Vettel.

After that, Buemi was approached by Red Bull to sign a five-year sponsorship deal in 2005. That propelled his career to greater heights as he started racing in 2006 and 2007 in Formula Three, followed by driving an F1 car for the first time. His first Grand Prix was very memorable as his whole family came out there to support him, including his two uncles.


In his first-ever F1 Qualifying session, Buemi drove Toro Rosso STR4 and finished seventh as Lewis Hamilton was disqualified. He is one of the few racers like Vettel, Kimi Raikkonen, and Alain Prost to ever score points on his debut Grand Prix. Also, he finished the season in 16th place with six points.

Likewise, after three full seasons with Toro Rosso in F1, Sebastien joined Red Bull as its third driver. His task was to work on the development of the car and be ready to take over one of the two drivers in a Grand Prix when needed a backup. In the 2012 season, the racer competed in Le Mans 24 Hours. Unfortunately, his car was retired after his co-driver Anthony Davidson crashed.

Le Mans' prize money for the overall winner was estimated to be $40,852.8 (€40,000), as per BOLAVIP. Also, the average pay of a Formula E driver is $61,198 per annum. So, Buemi must have earned considerably from his prize money and competing in Formula E. Aside from that, he has also signed sponsorship contracts with Maxon and Swiss Visio. Hence, Sebastien Buemi's net worth must be significant.

Married To His Long-Time Girlfriend

The former Formula E champ has been happily married to his long-time girlfriend, Jennifer Buemi since August 2015. The couple has known each other since they were teenagers and later fell in love. Sebastien Buemi's wife was working as a pediatric nurse at the Rennaz Hospital as per a 2015 article. 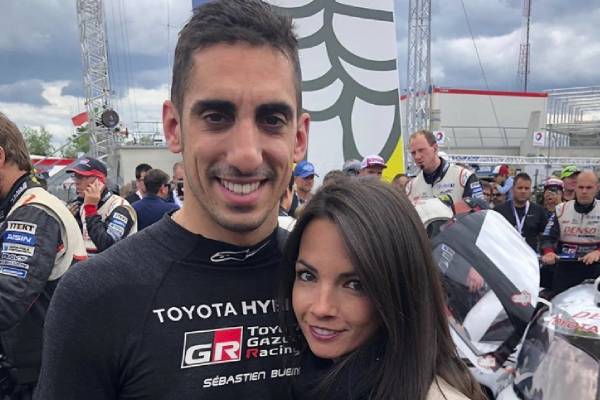 Sebastian Buemi's spouse hails from Montreux, Switzerland, and was quite busy with her job when the COVID-19 hit. The racer used to worry about her a lot but was appreciative of her dedication to saving lives.

Sebastien considers himself quite lucky to be the father of two adorable kids. He often reminisces the sacrifice made by his father when he was growing up and questions himself if he can do the same thing for his children. Sebastien Buemi's sons are named Jules Buemi and Theo Buemi.

The former F1 racer's boys were born two years apart and look adorable. It is certain fatherhood has changed the Swiss driver as he seems to acknowledge the contribution of his dad in his career. Also, it can be reflected in how he thinks about his kids.

Overall, Buemi seems to be living a grand and comfortable life with his beautiful family. Let's hope the sportsman can keep doing well in racing and make his family proud. Our best wishes are with the racer.