Robin Frijns is a racing car driver from the Netherlands. The 2012 Formula Renault 3.5 Series champion, he became the first racer to claim the victory in his debut season, since the legendary Robert Kubica. Moreover, he is also a current racer of Formula E, where he drives for Envision Racing.

Robin has been involved in several racing teams over the years. He has made a good name for himself in the racing world and has earned significant fame and fortune. Now, without further ado, let's learn in detail about Robin Frijns' biography, including some interesting facts about his personal life, career, and many more.

The sportsman was born on August 7, 1991, in Maastricht, Netherlands. He grew up in his hometown with his siblings, Michael Frijns and Kelly Frijns. Robin Frjns' mother is Odile Frijns, but his dad's name has not been revealed yet. Moreover, Robin's family had nothing to do with racing in his early days.

Robin Frijns' parents were not into racing, instead, they liked soccer. His brother too played at a high level before breaking his leg. On the other hand, the racer's sister is into horses. So, as a kid, he never thought it was a cool thing to be a racing driver.

Frijns started his motorsports journey when he was five years old. At that time, one of his dad's friends began a racing team with three Porsches. His father had helped his buddy a bit by sponsoring, as he had his own construction company. Despite the lack of interest in racing, his old man used to attend several races. And as Robin was not old enough to be home alone, he had to go with him.

In an interview, the Dutch national revealed that he kind of liked being on a race track even though he had no idea what was going on. When he was six, the team gave him a quad, and he drove it in the garden. After that, Robin Frijns' dad was invited to a karting event, and there he saw a go-kart for the first time. The following week, the dad-son duo went back, and soon Robin started his racing career.

On the other hand, talking about his education, the driver has not revealed much. Either he does not want to disclose any information, or he might have dropped out to focus on his budding motorsports journey.

Robin Frijns Net Worth And Career

Coming from a family that was away from the racing world, nobody might have thought that the then five-year-old Robin, who used to accompany his dad to several races, would go on to become one of the most popular and talented racers. From karting to driving Formula E cars, it has been a long journey for Frijns in the racing world. Alongside fame, he must have earned a significant amount. Hence, Robin Frijns' net worth must be a notable sum.

The 5' 7" tall racer who started karting at six won a championship a year later. In the following years, he earned Belgian and French karting titles. He started his Formula racing career with Josef Kauffmann Racing in the 2009 Formula BMW Europe season. A year later, he made his first attempt at Formula Renault 2.0. The next year, he competed in the Eurocup Formula Renault 2.0 and won the title.

In 2012, the Dutch driver moved to the Formula Renault 3.5 Series. He raced for the British team Fortec Motorsports. At the end of the season, Sauber F1 Team announced him as a test and reserve driver for 2013. At the same time, he also competed in GP2 Series with Hilmer Motorsport. In January 2014, Caterham confirmed him as their reserve driver.

In August 2015, Frijns debuted in Formula E with Amlin Andretti Formula E Team. The next season, too, he stayed on the team and partnered with Antonio Felix da Costa. Then, in the 2018-19 season, he joined Envision Racing along with Sam Bird. For the 2021-22 season, he is partnered with Nick Cassidy. Likewise, Alice Powell joined the team in November 2021 as an official simulator and development driver.

Since 2021, Robin has been racing in the FIA World Endurance Championship with Team WRT. Now, let's take a look at the following table showing some of Robin's stats.

Furthermore, as per Esports Earnings, Robin earned $20K from one tournament. He must have accumulated significant prize money after winning the Formula 3 championship and other races. Likewise, a Formula E racer earns $61,198 annually as an average pay. So, Robin Frijns' salary must also be notable.

Furthermore, Robin is the co-founder of Frijns Unlimited. It is a company providing various services like car wrapping, PPF, window tinting, car storage, and several others. Robin's other earning source is his endorsement and sponsorship deals. Hence, the racer must be making a good income from all these ventures. Thus, Robin Frijns' net worth must be a considerable sum.

Talking about his personal details, the Dutch racer is in a relationship. He is currently dating Maike Katarina. It remains a mystery regarding when the couple met and how their love life proceeded. However, Robin shared the duo's first picture in September 2019. 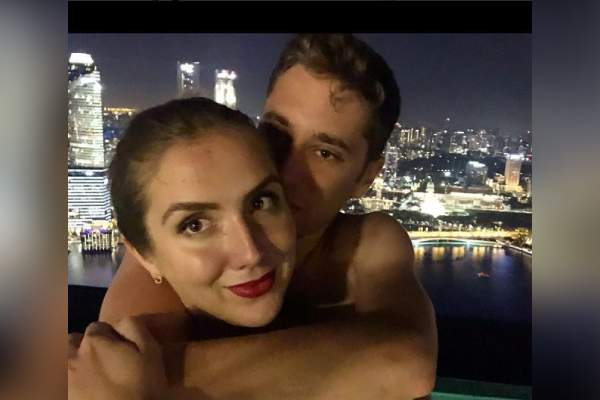 Since then, Robin Frijns' girlfriend has often made appearances on his Instagram posts. On the other hand, her IG is private, but it can be assumed that Robin's partner does the same. Moreover, the Dutch racer's lady love is the DTM team manager. She is also the CEO and co-founder of Frijns Unlimited.

All in all, the duo seem to be madly in love with each other. So, will we get to hear some wedding bells in the coming days? Overall, the Formula E racer seems to be doing well. Also, as Robin is still very involved in his profession, his riches are likely to increase. At the same time, may he continue making his parents proud.