Any Formula E fans who keep regular updates of its races might have heard the name JEV. If you don't know who he is, then don't worry; we got you covered. JEV is the nickname of Jean-Eric Vergne. He is a racing driver from France and one of the participants in the 2021-22 season.

Jean has been racing for a long time now. He has gained significant fame and fortune in his name. As a result, many people might be curious to know about him. So, stick with us till the end of his biography.

One Of The Two Children Of His Parents

Jean was born on April 25, 1990, in Pontoise, France. He grew up with his sister, Lea Vergne. The Vergne siblings share a close-knitted bond, and he often shares adorable pictures of them.

Jean's talent in racing was nurtured by his father, Jean-Marie Vergne. In the 1990s, he founded the RKC Karting facility in Cormeilles, northern Paris. It was there the driver started karting at the tender age of 4. 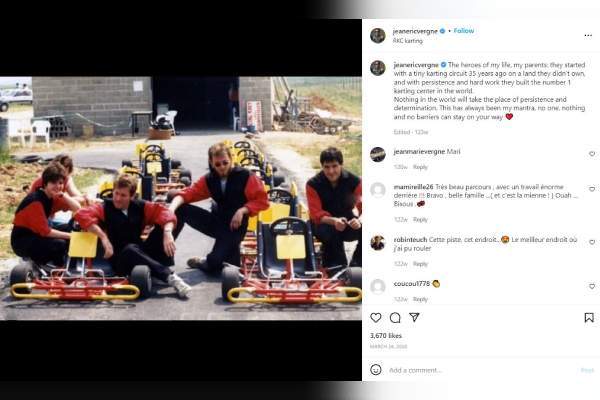 The racer was raised in a loving household. His family was already in the racing business, making it easier for him to train at a very young age. Although there's not much information about Jean-Eric Vergne's mom, we can assume she must support his career.

On the other hand, the French driver has not revealed much about his educational background.

Jean-Eric Vergne Net Worth And Career

Jean, who began karting at the age of four, was already racing in high-level championships by the age of 10. A year later, he claimed his first French junior title. In 2007, the sportsman made his single-seater debut and has moved upward since then. Along with fame, he must have earned considerably. Thus, Jean-Eric Vergne's net worth is a commendable sum.

In 2007, JEV joined the French Formula Renault Campus series. At the end of the season, he became a member of the French Automobile Sports Federation and the Red Bull Junior Team. Then, in 2010, he began competing in the British Formula 3 Championship with Carlin Motorsport.

In May 2010, the French racing driver was signed by Tech 1 Racing to participate in the opening GP3 Series but only raced two or three races. In July 2010, Vergne replaced Brendon Hartley for the final three events of the 2010 Formula Renault 3.5 Series. He came second in the Formula Renault 3.5 Series in 2011 and, as a result, was able to test with Red Bull Racing in Formula 1.

After that, the French national was promoted to Red Bull's sister squad, Scuderia Toro Rosso, in 2012. He raced with the team for the next three seasons, where he participated in 58 Grand Prix, scored 51 points, and even secured a best finish of sixth. However, for the 2015 season, JEV was left without a ride after Red Bull announced that Max Verstappen would join Daniil Kvyat in the Toro Rosso team.

Later, Sebastian Vettel left Red Bull, and Kvyat replaced him. Following that, Jean-Eric had a possible seat at Toro Rosso. However, in November 2014, he left the team, and Carlos Sainz Jr. replaced him. Then, he joined Ferrari in 2015 as a development and test driver, where he served till February 2017.

In the 2014-15 season, Andretti Autosport signed Vergne as a full-time driver, and he debuted in the third race of the season. The following season, he joined DS Virgin Racing and then Techeetah. For the 2021-22 season, he is racing for Techeetah with Antonio Felix da Costa. With all that being said about his professional venture, let's take a look at some of JEV's career stats.

Jean-Eric must have earned a considerable fortune in his professional career. He must have received a significant amount of prize money. Likewise, different teams must have provided him with handsome paycheques. Talking about which, the average annual salary of a Formula E racer is $61,198, as listed by ZipRecruiter.

Furthermore, Vergne has also signed sponsorship and partnership deals with several brands like Veloce eSports, DS Automobiles, and others. He is the co-founder of the eSports team Veloce Racing. Moreover, he is a brand ambassador of TAG Heuer and Michelin. The race car driver also founded Endorphin Distilled Spirits in January 2020.

Hence, the Pontoise native's earnings must be notable from the ventures mentioned above. As a result, Jean-Eric Vergne's net worth is a commendable sum.

Is Happily Married; Expecting A Baby

Jean's professional life is not the only thing he enjoys; it's his marital life too. He shares a blissful marriage with Fiorina Benveniste-Schuler Vergne. The couple tied the knot in March 2022, five months after getting engaged in October 2021.

The married duo has, however, kept the details about how and when they met a secret. Nevertheless, the smitten duo seems madly in love with each other. Also, Jean-Eric Vergne's wife is a consultant for special projects, as per her IG bio. 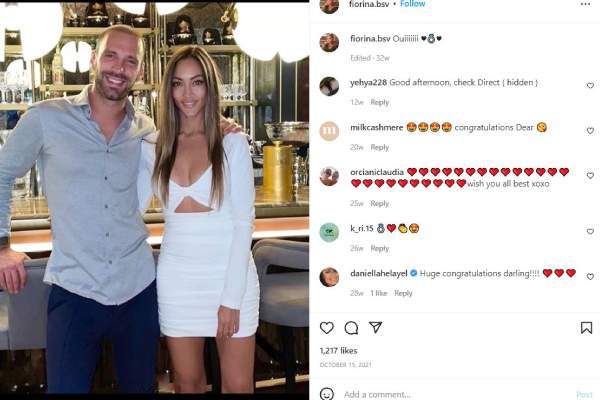 Furthermore, the racing driver is soon going to be a dad. In a Father's Day post in June 2022, he revealed their pregnancy news. The new parents-to-be are extremely excited to welcome their baby.

All in all, JEV seems to be doing well. We wish him all the best on his new journey of fatherhood. May he continue making his parents proud. Hopefully, we will get to see him clenching some more titles in the coming days.