Andre Lotterer is a German professional race car driver competing for TAG Heuer Porsche in the FIA Formula E Championship. He is best known for his performances in the endurance racing category. With 10 wins in three different teams, Lotterer established himself as one of the best in the World Endurance Championship before moving on to Formula E.

Having also raced in Formula One, Lotterer has managed to garner quite an experience in the world of racing. He has been driving in Formula E for five years and has started over 60 races as of now. However, despite being a household name in racing, much is left to explore about Andre. So, in this biography, let's talk more about Andre's professional achievements and find out what he wants to do next.

Late Father Pushed Him To Race

Andre was born on November 19, 1981, to a German father and a Belgian mother, Rosy Lotterer, in Duisburg, West Germany. He is quite close to his mom and often posts pictures with her. Likewise, Andre Lotterer's dad, Henri Lotterer, helped him discover his talent from a young age. He was seven years old when he started racing and realized his potential soon because of his old man.

Andre Lotterer's father was a team manager, part-time team owner, and engineer in Belgium. Henri, who was originally from Peru, moved his family to Belgium when Andre was three and later built a racing team RAS Sport. Having been brought up in that environment, Andre always wanted to become a racer, and the support he got was immense. Henri took him to the go-kart track, and when he saw he was quick and doing good lines and apexes, he asked if Andre wanted to continue it.

The young gun said yes, and he began his motorsports journey. He loved racing, which was furthered by his dad's seriousness, who motivated him to set high aims, including racing in Formula One. Unfortunately, Andre's father passed away from cancer in 2009. 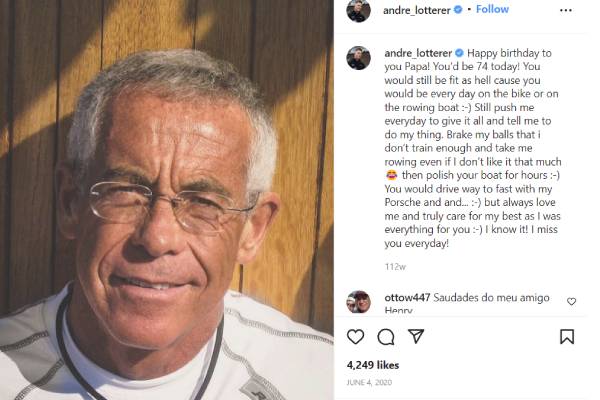 Andre Lotterer's dad was a team manager and owner and guided his son to race at the age of seven. Image Source: Andre Lotterer Instagram.

Likewise, Andre always knew he had to succeed in racing as it was very important to his life. Ever since he was a young boy, he understood the importance of money. Having not come from a rich background, his family struggled to fund his career. And, the sportsman didn't disappoint his family as he became an F1 test driver in 2002 and made his F1 debut in 2014.

Andre Lotterer Net Worth And Career

Having won two Formula BMW titles, two Super GT Japan, and three Le Mans, Andre has undoubtedly achieved a lot. He was also triumphant in the 2012 FIA World Endurance Championship. Also, considering his brief F1 career, Lotterer must have amassed a significant amount of money. Hence, Andre Lotterer's net worth must be massive.

Andre spent 2002 as a test driver for the Jaguar Formula One Team but did not get a race seat. However, he did not stop at just that, as the racer replaced Kamui Kobayashi at Caterham for a race in the 2014 Belgium Grand Prix. That must have felt so rewarding as he finally achieved his and his late father's dream.

Moreover, Lotterer made his Formula E debut in the 2017-18 season and has raced for two teams so far. With the DS Techeetah Formula E Team, he made it to four podiums in two seasons and partnered with Jean-Eric Vergne. He also finished both seasons in eighth place before joining TAG Heuer Porsche Formula E Team.

Likewise, the black-haired racer nearly won the 2019 Hong Kong ePrix but was hit by Sam Bird in the second last lap. That punctured his tire and pushed him to 14th. Nevertheless, he claimed his first pole position in the Rome ePrix the same season. He came second behind Jaguar's Mitch Evans and finished the season in the eighth position with 86 points.

Andre's surge continued as he joined Porsche on July 17, 2019, with partner Neel Jani. He made his debut at Diriyah and finished the first round in second place and the second round in 14th. He also ranked second in the first of six races in Berlin and ended the 2020 season again in the eighth position with 71 points.

Lotterer, who has decided to depart from Formula E at the end of the 2021-22 season, finished second in Mexico City in February 2022. He is still competing in the series and must be working hard to earn the Formula E title.

Hence, Andre Lotterer's net worth must be immense.

Talking about the German driver's love life, he is dating former model Ania Porzuczek, who also goes by Ania Niaa on IG. She is a traveling enthusiast and formula e brand ambassador. Furthermore, did you know the pair are engaged? The racer's then-girlfriend accepted his proposal in October 2020. Though the duo hasn't announced any marriage plans, will we get to hear wedding bells soon? 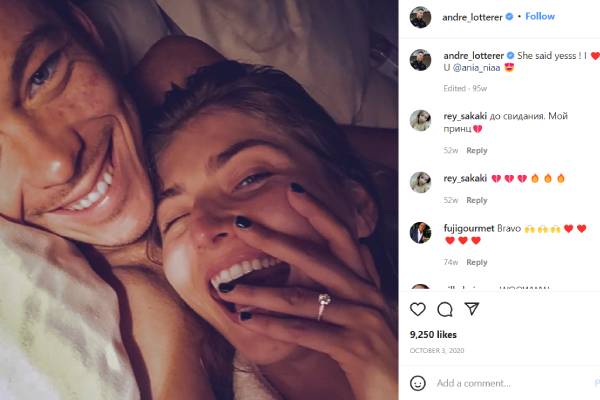 Andre Lotterer's fiancée works as the hospitality manager at Extreme E. She is also involved in Formula E as a part-time hospitality assistant. She must be quite supportive of her fiancé's career as she is also engaged in the racing business.

Overall, Lotterer seems to be enjoying a comfortable and content life with his family. Let's hope he can keep winning more titles and make them proud. As this is his last season in Formula E, is he planning to explore other racing series? Hopefully, we will learn about his new racing plans soon.