If you have a loving family, a secure environment to live and a couple of good friends, then consider yourself lucky because, for some people, it's a luxury they can't afford. One such person whose life story is an inspiration is Britain Hart, a professional BKFC fighter with a burdensome past.

So in this article, we will discuss everything we know about the boxer's life and how, despite the dark times she had to go through, she finally reached the light at the end of the tunnel. So keep reading until the end to know about Britain Hart's net worth, career, childhood, and relationships.

Britain Hart was born on February 2, 1990. Hart grew up in Turkey until her family relocated to Germany. She eventually moved to Virginia in 2000. By 18, the boxer had lived in three different countries, including the USA. As she got to the US, she was bullied and called German, even though she was not German. And also, as someone who could speak a different language, the kids at her school gave her a hard time.

It took her some time to adjust to the new environment and stand up to her bullies. But by high school, she became a protector as she used to stand up to the bullies and protect other kids who got bullied. A lot of times, Hart got in trouble for fighting when she was at Staunton River High School. Despite everything, she was a bright student and prioritized her studies. Hart went on to achieve her bachelor's degree from Lynchburg College in Sports Management and then her master's degree in Physical Education from Old Dominion University.

Sometimes before ending up in a good place, we go through a bad place. Hart is now happier and in a better place, but she had to go through a fair share of hard times. At the young age of 19, Hart became a mother and was trapped in an abusive marriage. Britain was going through some difficult times and got into the habit of drinking, which made her end up with a DUI.

The identity of her ex-husband is unknown yet, but the boxer has two children with him. In an interview, she also revealed that her ex-husband got in trouble with the law for felony, assault, and strangulation. She ended up getting a protective order against her ex-husband and got divorced. She went through a custody battle for both of her children but lost custody of her son, leaving her with her daughter only.

Due to all the frustrations and disappointments, Hart walked into a boxing gym in 2016 and has never looked back. When financial problems started to rise, she viewed boxing as more than just an outlet for aggression. Before going pro in BKFC, Hart was a professional boxer. Ever since joining the BKFC roster, she has been in multiple bloody battles.

Bare Knuckle is a tough fight. In MMA, you can use gloves, kick, wrestle and use elbows, but the bare-knuckle fight is only about closed fist fights. When bare-knuckles fight organizers approached Hart, she initially rejected the offer. As she thought she wasn't ready for BKFC. But due to the constant persistence of organizers, Hart gave in and joined BKFC. She faced Bec Rawlings on August 25, 2018. Unfortunately, she lost the match to Bec through a split decision, but it changed Britain's life. The said video has more than 15 million views as of January 2023.

After almost a year, Hart returned to the BKFC ring to face Christine Ferea on April 6, 2019. Ferea and Hart's tussle ended in the latter's loss. Two consecutive losses must have discouraged the fighter, but she never gave up. After the initial loss, she was on fire and won 4 fights consecutively. The Utah native faced Randine Eckholm on November 13, 2020, and finally got the taste of a victory. She challenged Paige VanZant, in the heat of a moment. VanZant was already a big deal in BKFC, so the odds were against Hart. Regardless, she shocked the audience by winning against Paige. Later, she went on to defeat Jenny Savage and Pearl Gonzalez.

After a few wins, Hart's fanbase expanded, and she earned a reputation as a brutal and cut-throat fighter in BKFC. However, she won the bout against Rawlings on June 21, 2022, and got even for her initial loss in 2018. Hart's BKFC record is 6-3-0 as of January 2023.

It is quite a challenge to find the total career earnings of the BKFC fighters as most of them prefer to keep their incomes hidden. Since her BKFC debut, Hart has earned a notable amount of money from her matches. Today, she is rated 5th in the USA and 42 worldwide in professional boxing. With the given status, she sure earns quite a money from each of her matches.

The BKFC promotion does not reveal their payment details. Hence, the payment for Britain's matches has not been disclosed, but since she is an established fighter now, we can assume Britain Hart's net worth to be a significant amount.

Found Her Happily Ever After

You don't give up when you don't get it right the first time. Instead, you try again and make it better. Britain had a bad end to her abusive first marriage. But got another chance at love. A love that wasn't violent but was calm and a hand that didn't raise to hit but to admire. For that, she had to thank BKFC, for it had not only changed her life but brought her closer to the love of her life.

On July 21, 2021, Britain married Joey Beltran at a ceremony in Florida. Beltran is a former UFC and Bellator fighter who succeeded with the BKFC. The new couple openly expresses their love on and off the screen and are living together blissfully. Joey takes a lot of pride in being called Britain Hart's husband. 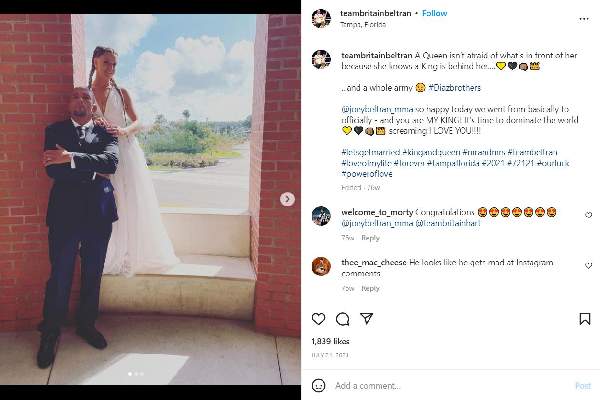 From Beltron's love-filled Instagram posts dedicated to his wife, it is clear that the fighter knew Britain was the one from the moment he met her. The BKFC power couple lives a healthy, happy, and love-filled life alongside each other. We wish them a happy marital life and a lifetime of togetherness.

Is Also A Mother Of Two

As mentioned above, Hart is a mother of two. She has a son Peyton Lewis and a daughter Paris Lynelle. Her Instagram is filled with pictures of her children. She is a loving mother who pours all her love into her children. On the other hand, Beltran has also welcomed Hart's children with wide arms and open hearts. He, too, posts pictures of his step-children on his Instagram. From the looks of it, the Hart-Beltran family is flourishing and is living their best life.

Hart's last bout was on September 10, 2022, against Charisa Sigala. There's yet to be a date fixed for her next match, but we look forward to it. We wish the fighter all the best for her upcoming matches.