In this male-dominated world, where women need to be twice as good and often half as compensated, it isn't any less than the battle to prove ones worth every single day. And on top of that to be a queer woman must be testing. Such is the case for current BKFC flyweight champion Christine Ferea.

Growing up with a troubled childhood to being the current BKFC flyweight champion, it isn't any less than a miracle to see where Ferea stands today. Therefore, in this article, we talk all about Christine Ferea's net worth, career, family, and relationships.

Christine has been fighting her whole life, from her childhood days in the streets of San Jose, California, to the ring of the Bare-Knuckle Fighting Championship (BKFC). Christine and her brother William Ferea were raised by a single mother who left Ferea's biological father, who was an alcoholic. In addition, Christine Ferea's stepdad is an important influence in her life.

Having a rough childhood, Ferea talks about fighting for all the misfits out there to show people that they can get anywhere they want to. Since she has pulled herself out of her troubled childhood, she hopes that she can show it to people as well and be a source of motivation to those in need.

Ferea admits to leading an unhealthy lifestyle during that period of her life, even using alcohol and drugs to deal with emotions and unresolved childhood trauma. She had an epiphany during her time in jail and decided to change her life. Later, she went back to school and signed up for a gym.

Fighting saved Christine from self-hate and thoughts of suicide. Christine also reminisces about how her hometown was not a safe place to come out. So she came out only after moving out to Las Vegas.

Christine Ferea Net Worth And Career

With an astonishing record, Ferea has managed to be feared as well as respected in and out of the rings. From Invicta to BKFC, the boxer has managed to bag a notable amount of money through her fighting/boxing career. Ferea got paid $22,500 for her winning match at BKFC 28. Even though other payments have not been disclosed, we can assume Christine Ferea's net worth to be a significant amount.

Christine began training in Muay Thai and has an impressive amateur record of 13-0. Later, she opted for MMA, where she held an undefeated 3-0 record as an amateur prior to being discovered by Invicta FC in 2017. Her professional MMA record is 1-2. She was then approached by Fledgling Bare Knuckle Fighting Championship.

Ferea defied the odds in transcending a troubled childhood and became an unparalleled piece in BKFC. With her recent win against Taylor Starling on August 27, 2022, Christine is the Women's Flyweight Champion. Her BKFC record is 6-1-0 as of December 2022. Another huge milestone is she was named Female Fighter of the Year in 2022.

No matter how far she has come and how much success and respect she has been garnering over the years, Ferea never let her humbleness getaway. She is still down to earth and is always thriving to work hard each day with every recognition she gets.

While talking about someone who has already made it, let's not forget about emerging new faces as well. Marciano Hernandez is one promising boxer who is the one to look out for.

Christine found the girl of her dreams due to her career. How, you might wonder? Well, Ferea is in a relationship with her manager, Juliet Grey, aka Jewlz. The exact timeline and story of how their relationship flourished are yet to be known. However, the couple seems happy and can be seen frequently on each other's social media. While the couple is yet to welcome any kids, Christine Ferea's lady love has three children. 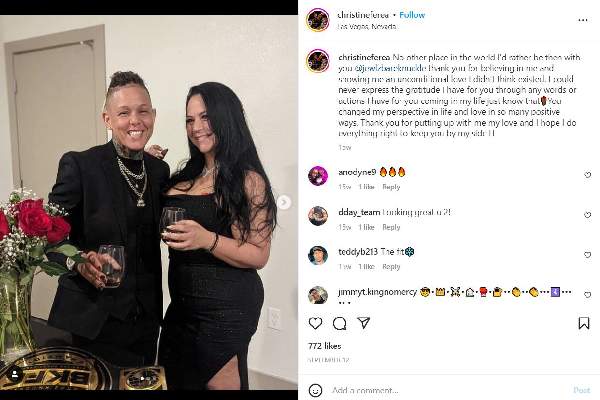 The lady fighter constantly expresses he gratitude towards Grey and mentions how she has changed her life in positive ways. She feels a particular responsibility to women and to the LGBTQ community and continually tries to make an impact using her platform. Ferea looks happier than ever and is busy tasting the success by the side of her loved ones. We wish the fighter all the luck and root for her future fights as well.