It takes tremendous courage not to let circumstances dictate your future. But, no matter how bad a situation you were born in, what you make out of such scenarios is what it all comes down to. Such is the story of Pearl Gonzalez, a professional MMA fighter who turned her life around with its help.

This article will discuss how Pearl went from a potentially dark future to where she is today. If you are curious about her story, then stick with us until the end to learn about Peal, from her net worth and career to relationships.

From The Rock Bottom To MMA

Pearl Gonzalez, born Pearlmelia Marie Gonzalez, was born on August 12, 1986, in Chicago, Illinois. Being born to parents who were drug addicts, you can imagine the horror the child had to go through at early age. Fighters from a harsh background aren't new in combat sports, but her story is moving nonetheless.

The fighter recalls constantly being in gang fights and continually fearing for her life. But life took a U-turn when she was introduced to martial arts. After Pearl Gonzalez's dad came clean when she was nine, it was just them from then. She was split up from her mom and did not have her sisters growing up.

In an Interview, Gonzalez revealed that to protect her then-heroin-addict husband, she got in trouble and ended up in jail for two weeks. She recalls that time to be the toughest time of her life. However, during that time of hopelessness, her dad was the one who reached out and bailed her out by putting out $20,000. He was also the one who introduced Pearl to a combat career. Fortunately, she found a healthy outlet to let her anger out.

Gonzalez first competed for the Xtreme Fighting Championship and amassed a record of 6-1 before being signed by UFC. Her promotional debut was on April 8, 2017, at UFC 210. She was let go from UFC after two consecutive losses. After UFC, Pearl signed with Invicta FC and made her promotional debut on March 24, 2018. Pearl is one of the strongest strawweight contenders and has an impressive record of 10-5-0 as of January 2023. 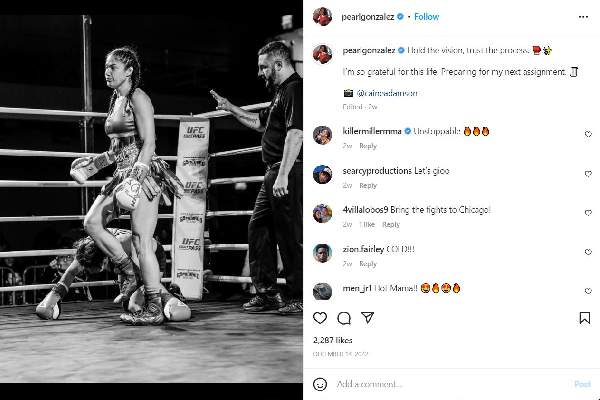 Gonzalez hopes her story helps someone who might need it and is still grateful for how her life has turned. She has been competing in BKFC since 2021.

Another lady fighter who also had a troubled childhood and used MMA as a medium to turn her life around is Christine Ferea. She is a strawweight who is 5'4" and 115 pounds.

Since her professional UFC debut in 2017, Gonzalez has made a significant amount of money. Having a long professional fighting record, it is clear that the lady fighter has made quite a fortune from it. According to Celebrity Net Worth, Pearl Gonzalez's net worth is $400 thousand. So the former UFC fighter is indeed living a comfortable life.

Apart from fighting, Gonzalez has other sources of income as well. Currently, she hosts the Extra Rounds Podcast on UFC Fight pass. This must have contributed significantly to Pearl Gonzalez's earnings. Even though Pearl has not played any fights in the last two years, many fans eagerly wait for her comeback.

Pearl is quite active on her social media. But only let fans into what she wants them to know. Through some digging, we found out about Pearl Gonzalez's ex-husband, Javier Keyser, who was in the US navy. However, the reason for the couple's split has not been revealed yet.

Also, in the promotional video by Invicta FC, Gonzalez talked about being married to a heroin addict and all the troubles she had to face before MMA saved her life and turned it for the better. However, the details regarding it are not known.

Even though she has not mentioned anything regarding her relationship openly, Pearl seems to be content and living her life to the fullest. There has been no news regarding her comeback, but we collectively are looking forward to it.