Although relatively unknown as an MLB athlete, Kevin Cash found success as a manager for the Tampa Bay Rays. Photo Source: Wikimedia Commons.

Kevin Cash was determined to make a name in the professional baseball scene from his early years. However, after being turned down for contracts in the MLB, he was forced to play in the minor leagues for several years.

Even when Kevin eventually got contracts from MLB teams, he could not make the most of it and did not find any significant success. And when he announced his retirement, many thought it was the end of the baseball era for Cash. Nonetheless, he proved them wrong.

Kevin made waves across the US as he returned as a manager for the Tampa Bay Rays. And with each passing day, he gained more popularity as a coach. So today, we will uncover Kevin Cash's biography and discover his odyssey.

Growing Up Kevin Had Avid Passion For Baseball

The MLB coach had his heart set on baseball as early as he could remember. He was born on December 6, 1977, in Tampa, Florida, and grew up surrounded by the sport.

Kevin Cash's father, Michael Cash, who had played five seasons as an infielder in the minors, was one of his earliest coaches. So, there was not a day in his life where he was not shot with a barrage of baseball questions. Kevin's mother, Patsy Cash, also acknowledges Kevin's keen interest in baseball from his childhood.

Justin Cash, recalls the years when his older sibling, Kevin made him go to daily baseball practice. Although Kevin Cash's brother recalls playing soccer as well, baseball got stuck in Kevin's mind as he grew up.

Kevin Primarily Was The Third Baseman, Not A Catcher

It was a no-brainer for little Cash when he was asked to sign up for one of the sports clubs at Gaither High School. He had already earned a name after reaching the 1989 Little League World Series finals while playing for Northside Little League. So, unsurprisingly, Kevin chose baseball.

Following his graduation from Gaither, Kevin attended Florida State University. Here, he played for the Seminoles baseball team under head coach Mike Martin. And throughout his college years, Kevin started in 148 games as an infielder and appeared in two College World Series. However, he was unable to win the championship both times. 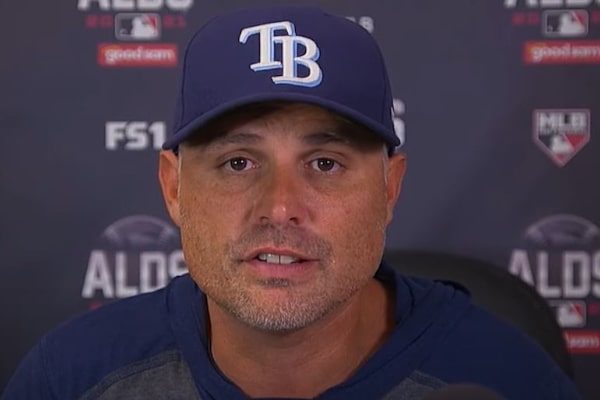 Kevin Cash's most successful year at Florida State University was 1999, when he reached the finals of the College World Series. Photo Source: Social Media.

Cash primarily played as a third baseman at Florida State, without much success at the position. Furthermore, he was undrafted and did not get any contracts from major baseball clubs.

It was the summer of 1999 when the Tampa native finally got his big break. While playing as a substitute catcher, Tim Wilken, a then-scout for the Toronto Jays, saw his capability as a catcher. Afterward, Kevin signed up with the Jays as a catcher.

Cash began his professional playing career in 2000 with the Hagerstown Suns, a Class A farm team of the Blue Jays. He proved to be a solid performer for the team, and with his outstanding catching ability, he helped the team reach the Triple-A level in 2002.

Afterward, the Toronto Blue Jays promoted him to their MLB team for the 2002 season. He appeared in 101 games with the Blue Jays from 2002 through 2004, mainly as a backup catcher and defensive replacement.

Cash appeared in 246 MLB games across eight seasons, batting .183 with 12 home runs and 58 RBIs. Although primarily a catcher, he has also played as a third baseman, designated hitter, and pitcher.

After leaving Jays, Kevin played for four more MLB teams. He was part of the Tampa Bay Devil Rays, the Boston Red Sox, the New York Yankees, and the Houston Astros.

Cash had a 12-year professional playing career, including minor leagues. During his minor league career, he batted in 678 games, making 245 hits and 74 home runs.

Cash's Career As A Coach

Following his retirement on 8th January 2008, Kevin was announced as an advance scout for the Blue Jays for the 2012 season. Shortly after the season ended, he joined the Cleveland Indians as their bullpen coach and served the team till the 2014 season.

On 5th December 2015, The Tampa Bay Rays hired Cash as their manager. He succeeded Joe Maddon and became the youngest manager of the MLB. He was offered a five-year contract at the time. 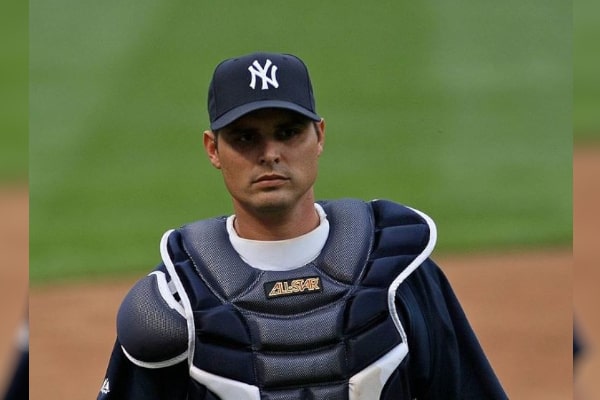 Kevin Cash, who took over for Joe Madden as manager of the Tampa Bay Rays in 2015, became the league's youngest manager. Photo Source: Wikimedia Commons.

During a game against New York Yankees, pitcher Aroldis Chapman threw a pitch that narrowly missed the head of Rays batter, Mike Brosseau, on 1st September 2020. After the match, Kevin warned the Yankees that "I got a whole damn stable full of guys that throw 98 mph. Period." He faced a one-game suspension for his comments.

Nevertheless, Cash's five-year contract proved successful, as he was offered another contract that runs through 2024. He aided his team finish first in AL East Division twice and secured AL Manager of the Year twice in a row.

Kevin Cash Net Worth And Earnings

The Tampa native has been in and around the professional baseball scene for more than two decades. So naturally, people ponder all the wealth that Cash has accumulated throughout the years. Though relatively unknown and unsuccessful during his years as an MLB athlete, Kevin must have earned a hefty sum of money for his services as a catcher.

As aforementioned, Kevin was signed by the Jays as a free agent in 1991. At the time, he was offered $60,000 per year. Afterward, he played for eight seasons with five different franchises. Thus, even though details about his contract is not disclosed, he must have earned substantial fund over the years.

Kevin Cash's net worth did not rise until he was hired as the Tampa Bay Rays' manager in 2014. At the time, he signed a five-year contract with the franchise. Cash made around $600,000 per year as claimed by Business Insider. Although it is a considerable sum, it seems measly when compared to the $6 million-dollar annual salary of Angel's manager Mike Scioscia. 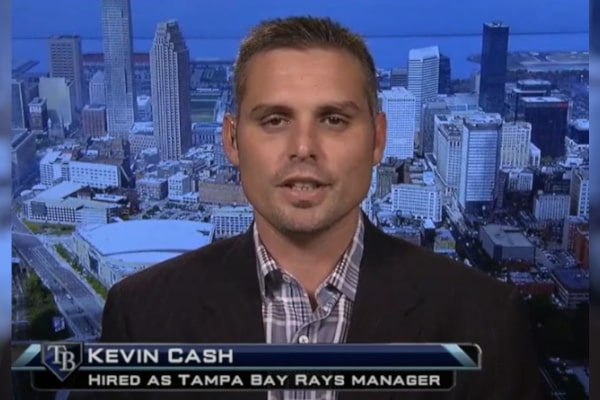 However, Kevin did see a rise in his paycheck after the Rays extended his contract for five more years. Reportedly, he signed a contract worth $5 million, with an annual salary of $1 million.

Despite the pay rise, the Florida State graduate is right around the lower section of the list alongside Braves' coach Brian Snitker and Diamonds' coach Torey Lovullo. But with many more years to come of his success, we are certain Kevin Cash's net worth will reach new heights.

Kevin Cash Is In A Marital Relationship

You might be interested in knowing what the Rays' coach does when he is not formulating new baseball strategies or analyzing his players. Well, he spends most of his off days in Hillsborough County, Florida, with his family.

Kevin Cash's wife, Emily Cash, is his long-time sweetheart. It is not disclosed how the couple met or started their romance. However, it has been more than a decade since they tied the knot. 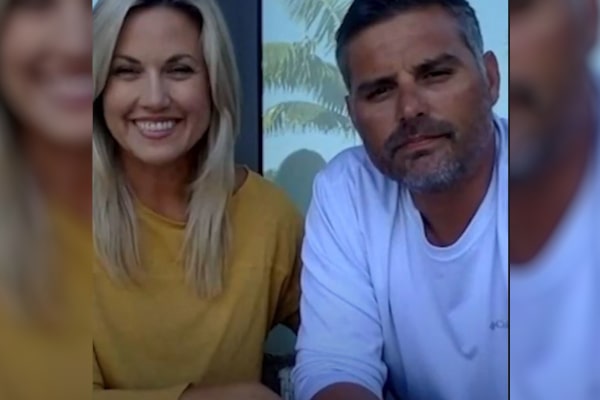 Kevin Cash and his wife, Emily Cash, have yet to reveal how they fell in love with each other. Photo Source: Social Media.

The husband-and-wife duo is not afraid to show love and affection to each other. Subsequently, Kevin's wife, Emily, has been spotted in stadiums, cheering for him and his team on more than one occasion.

Kevin Is A Proud Father Of Three

Cash has formed a lovely family with his wife, Emily. The couple welcomed their first child, Camden Cash, after their marriage. A couple of years later, they had another girl, whom they named Ella Cash. Lastly, Kevin Cash's wife, Emily, gave birth to their son, Jacob David Cash.

Of Kevin Cash's kids, Camden is the most popular among the masses. Cash's firstborn, Camden, made headlines after it was made public that she had to go through heart surgery at just the tender age of 17 months. However, she is doing fine, as reports suggest.

The Florida State graduate is not the one to flaunt his intimate connections. Consequently, not much is known about Kevin Cash's children or wife. Well, we wish the Cash family long-term prosperity and hope that the Tampa native will make us privy to his love life in the upcoming days.