5 Famous Football Players Who Have Been Charged With Sexual Assault

Home Crime & Rumor 5 Famous Football Players Who Have Been Charged With Sexual Assault.

Here, are five football players who have been arrested for sexual assault. Photo Source: Social Media.

Football has to be undoubtedly one of the most viewed sports in the US. In addition to viewership, the football career guarantees million-dollar contracts and endorsement deals. As a result, many people dream of being famous football players.

However, nothing is more frustrating than knowing some athletes ruined their hard-earned careers from illegal misconduct. From a minor foul play to cold-blooded murder, some of the sportsmen have done it all. Moreover, these footballers are the inspiration for many people. So, when they are arrested for heinous acts, it causes a significant impact.

Today, we will go through the top five famous football players who have been charged with sexual assault. Some of these sex offenders faced a lifetime ban whereas, some continued their sports journeys.

Ray McDonald is a former football defensive end of San Francisco 49ers. The team drafted him in the 2007 NFL Draft. Moreover, before starting professionally, the athlete had a tremendous collegiate football career. He was even named Palm Beach County Player of the Year during his senior year.

The footballer had an average play during his first four years with 49ers. However, the team again signed with him an extended five-year contract worth $20 million in 2011. Furthermore, the sportsperson was one of the lead players in Super Bowl XLVII. He faced one sack and three tackles in the game.

Although Ray's performance in the field was going well, he faced many legal troubles outside of it. The cops visited him for the first time on May 25, 2014, responding to his neighbor's call. In addition, on August 31 of the same year, the defender was arrested on suspicion of domestic violence.  However, no charges were filed for both cases.

McDonald was arrested for a third time that year for sexual assault in December. Again, he was suspected of having sexual intercourse with an intoxicated woman. Moreover, the victim filed a case against both Ray and his teammate Ahmad Brooks. The latter was charged with sexual battery for molesting her when she wasn't conscious. 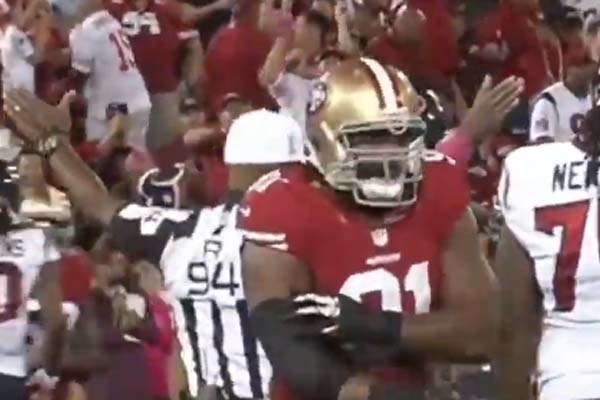 Ray McDonald was charged with a rape case for having intercourse with an intoxicated person. Photo Source: Social Media.

49ers terminated the former football player's contract hours later the days of his arrest. He paid $100,000 bail and was released from custody. Moreover, the case underwent investigations for two years before the prosecutors dropped the charges in April 2017. The complainant refused to testify, claiming she was exhausted from the case.

Although he escaped the rape charges, the athlete's illegal activities didn't stop there. He was arrested twice and later charged with domestic violence, child endangerment, and felony false imprisonment in July 2015. In addition, he faced a lawsuit alleging his dogs' terrorization in September 2020.

Ray McDonald's sexual assault cases were dismissed only with $100K bail money. Nonetheless, he couldn't redeem himself and continued to add more criminal cases against himself.

The former NFL player Kevin Allen had a relatively poor career. Nevertheless, the Philadelphia Eagles selected him in the 1985 NFL Draft. Moreover, although it was a golden opportunity, the player squandered it every time. His performance was so bad that he was even listed in Deadspin's worst NFL players of all time.

The sportsman might have redeemed himself, but he suddenly tested positive for cocaine test in 1986. As a result, the Eagles released him from the team. Moreover, amidst the scandal, Kevin was again arrested for a rape case only days later. He and his then-roommate Scott Cartwright were charged with raping a Massachusetts native.

The court sentenced Allen to fifteen years in prison, and NFL banned him for a lifetime. However, he was released after serving only 33 months in March 1990.

The footballer's ban was also lifted in 1991. As such, he tried for the Cincinnati Bengals and the San Francisco 49ers but failed. Eventually, the Orlando Thunder signed Allen in 1992. But, he couldn't provide good results and ended his NFL career.

Afterward, the former NFL footballer changed his route to the Arena Football League. He played for Cincinnati Rockers, Charlotte Rage, and Miami Hooters.

Kevin Allen made a comeback but couldn't live up to his potential in his entire career. Did he receive enough punishments for his crime; we will let you decide.

Some NFL players immediately lose their careers after they are found guilty of criminal activities. But, on the other hand, some wrongdoers continue their football journey even after their misdeeds are publicized. Take C.J. Spillman, for example.

The sportsman began his professional career with San Diego Chargers as a free agent in 2009. Afterward, the San Francisco 49ers selected him as a special teams' standout in 2010. Furthermore, the athlete next signed a contract with Dallas Cowboys in 2014.

After only a few weeks of joining Dallas, C.J. was accused of sexually assaulting a woman in October 2014. However, the incident didn't affect his career, and he participated in many competitions that year. In addition, the former player continued to play until the expiration of his contract. 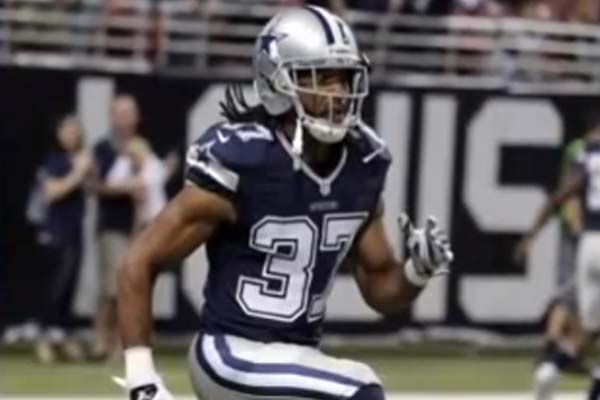 C.J. Spillman was able to continue his career despite being under investigation for rape charges. Photo Source: Social Media.

Spillman's case underwent investigation for more than a year. The victim accused him of raping her while he claimed it was consensual. In addition, the American athlete was previously accused of attempted rape of a massage therapist. However, he denied the allegations and wasn't charged.

Finally, the court proved the former footballer guilty and charged him with five years of a jail sentence on July 1, 2016.

At present, C.J. Spillman has been released from jail. He frequently posts pictures of his sons and family on his social media accounts.

Thomas Henderson enjoyed an excellent football career in the late-1990s. The Dallas Cowboys selected him in the 1st round of the 1975 NFL Draft. Moreover, the player later played as a linebacker for the San Francisco 49ers, Houston Oilers, and Miami Dolphins.

As a rookie, Thomas was named NIAA All-American two times in 1973 and 1974. In the same seasons, he became the two-time Little All-American. Furthermore, the professional player's most notable achievement was leading the Dallas Cowboys to be Super Bowl XII champion.

Although Henderson had a promising career ahead, he was addicted to drugs and alcohol. It heavily impacted his performances in the competitions. Amidst all of this, the sportsperson got arrested for doing drugs with two minors in November 1983. In addition, he had threatened the two teenagers with a gun and sexually assaulted one of them.

The former footballer pled no contest and received twenty-eight months sentence in prison. His NFL career was over, and later after serving his time, he went to rehab. However, the former athlete again made headlines after winning the lottery of $28 million in 2000. He used the lottery money to start a charity named East Side Youth Services & Street Outreach. 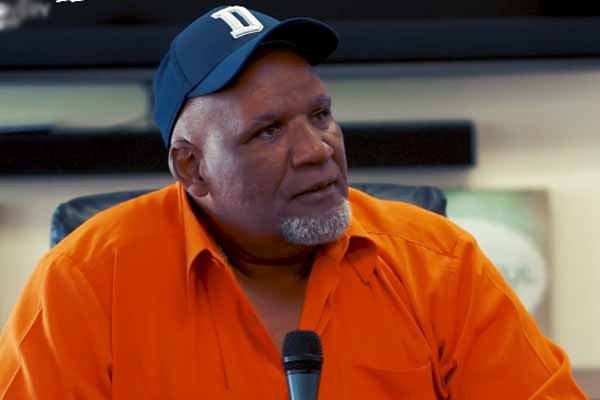 Thomas Henderson has realized his mistakes and changed his life for the better. He currently gives speeches and lectures regarding substance abuse in America.

Coming at the top place on our list is none other than Darren Sharper. He probably has to be the most dangerous sexual predator in NFL history. Moreover, the former footballer was drafted by Green Bay Packers in 1997. He later joined the Minnesota Vikings and New Orleans Saints.

The NFL selected the American athlete for five Pro Bowl games in his career. Additionally, he was a two-time first-team All-Pro in 2000 and 2009. Further, he led the Saints to win the Super Bowl XLIV.

However, none of his career achievements could wipe off Darren's crimes list. His sexual crimes surfaced only after his retirement in 2010. Moreover, Sharper was first accused of sexually abusing two women in his condo in March 2011. However, the police closed the case after five days of investigation.

Afterward, the retired football player faced five rape allegations from different women in 2013. He was eventually arrested on January 17, 2014, on two separate counts of sexual assault. In addition, he was released briefly but again got arrested in February 2014.

The trial continued until U.S. District Judge Jane Triche-Milazzo sentenced Darren to eighteen years in prison in August 2016. He was also fined $20,000 for drugging and raping more than 16 women in four states. Furthermore, Sharper's sentence was increased to twenty years for two additional forcible rape and drugging cases in November 2016.

Darren Sharper is currently spending time behind bars. He has tried to plead to reduce his jail time but has been rejected time and again.

Besides the footballers mentioned above, Dave Meggett, Anthony Mix, Jarriel King, Perrish Cox, etc., have been arrested for sexual assault cases over the years. Moreover, many athletes have lost their careers after being involved in various criminal activities.

Hopefully, other sportspeople will learn from their mistakes and not commit them in the upcoming days.