Born to renowned American musician, bandleader, and composer Frank Zappa, Dweezil Zappa was often compared to his dad. However, he has proved his ability to the world and become one of the most in-demand guitarists.

Dweezil developed a strong inclination for playing guitar and making music due to his early exposure to the music industry. As he is quite popular, questions like, "Is he married, or how much is his net worth?" might arise among his fan circle. Another widespread interest is how Dweezil has been continuing his father's legacy in recent days. To find out, keep reading Frank Zappa's son's biography to the end.

Born In A Household Of A Musical Legend

Dweezil was born in Los Angeles, California, on September 5, 1969, to Frank and Gail Zappa. The musician's father was of Sicilian, Arab, Greek, and French descent, while his mother was of Portuguese and German ancestry. Unfortunately, both of his parents have passed away.

Mr. Zappa is the second child of his mom and dad. His older sister is Moon Zappa, and his younger siblings are Diva Zappa and Ahmet Zappa. Similarly, Dweezil is the cousin of actress Lala Sloatman.

Ever since he was a little child, he used to learn his father's compositions which proved to be an eye-opening experience for the younger Zappa. To perform his father's old arrangements, he had to relearn the guitar and get insight into his dad's composing skills. He also accompanied Frank on his shows in his teenage years.

Did you know Dweezil's name wasn't initially registered? The nurse at the hospital where he was born refused to register him as Dweezil, even arguing with his mom in the delivery room about it. Frank was shocked by this turn of events, so he quickly provided the names of several musician friends, and the nurse mentioned all of them on the birth certificate. As a result, Zappa Jr. received the name Ian Donald Calvin Euclid Zappa.

Besides, not much is known about his educational background.

Dweezil Zappa Net Worth And Career

Frank Zappa's son started his professional career in the 1980s and has been associated with four labels: Barking Pumpkin Records, Favored Nations Entertainment, Zappa Records, and Chrysalis Records. Zappa is skilled in various instruments, including bass, piano, and banjo. Since 1986, he has released five solo albums and collaborated with numerous prominent musicians.

Hence, Zappa Jr's earnings from his album sales is substantial, allowing him to enjoy a comfortable lifestyle. Similarly, Dweezil Zappa's net worth is estimated to be $4 million, and his fortune primarily comes from his excellent musical career.

Zappa has released several singles, albums, and has collaborated with many artists. Now, let's look at some of his album's prices in the table shown below.

Also, Zappa teamed with his brother, Ahmet, to form the band Z and released two albums. Continuing his late dad's legacy, he headed a tribute act called Zappa Plays Zappa. The band was dedicated to performing his father's music. With the band, Dweezil released the albums Zappa Plays Zappa and Return Of The Son Of in 2012, which are available for $39.99 and $16.10, respectively, in Audio CD format.

Dispute Over A Trademark

Zappa Plays Zappa was well-received by the audience and even won Best Rock Instrumental Performance for playing Frank's instrumental classic, Peaches en Regalia, in the 2009 Grammy. However, in April 2016, Dweezil stated that the band's name would be changed to Dweezil Zappa Plays Frank Zappa. He did so following the Zappa Family Trust's cease-and-desist order.

Later, Frank Zappa's son was informed by the Trust's counsel that 'Dweezil Zappa Plays Frank Zappa' infringed on the Trust's trademarks for 'Zappa' and 'Frank Zappa.' Afterward, he held a tour in 2016 to commemorate the 50th anniversary of the release of his old man's first album, Freak Out! Zappa Jr. renamed the tour "50 years of Frank: Dweezil Zappa Plays Whatever the [email protected]%k He Wants - The Cease and Desist Tour" in defiance.

The whole matter of trademark arose after the Zappa siblings were drawn into a family estate dispute. It occurred that Frank Zappa's widow, Gail, didn't leave equal portions to her four surviving children. Ahmet and Diva received 30% of the Zappa Family Trust. Dweezil and Moon, on the other hand, were only given 20%.

The battle was ultimately put to rest in March 2019 when a Los Angeles judge accepted a settlement deal between three of the four Zappa siblings. However, Moon was not a part of the settlement.

Keeping aside these controversies, Dweezil's musical career is astonishing, and he has earned a hefty amount from it.

Besides earning money from his musical projects, Dweezil's fortune is also derived from his periodic acting career. According to IMDb, Zappa has around 28 acting credits, most of which are from television series. He has appeared in shows like Metalocalypse, On the Spot, According to Jim, The Chris Isaak Show, Son of the Beach, and Gary & Mike, to name a few.

Moreover, the rock guitarist has also acted in movies, namely Behind the Seams, Jack Frost, Anarchy TV, Fully Loaded, and The Running Man, to name a few. Besides, the average salary of an American actor is $59,725 annually. Hence, we can deduce that Dweezil Zappa's wealth increased with the contribution of his acting career.

Has Been Married Twice In His Lifetime

On September 3, 2005, the musician married fashion stylist Lauren Knudsen in Los Angeles. Lauren is a stylist as well as a jewelry and costume designer. She is represented by an international artist agency, Walter Schupfer. With the agency's help, Lauren brings new fashion trends to the market. Unfortunately, after five years of marriage, the duo filed for divorce in March 2010.

Following his separation from Lauren, the musician married Megan Marsicano in 2012 in Los Angeles, California, United States, in a private ceremony. Dweezil Zappa's wife has appeared in the documentary, Summer'82: When Zappa Came to Sicily, in 2013. Similarly, Megan also starred in an episode of Celebrity Wife Swap in 2014. 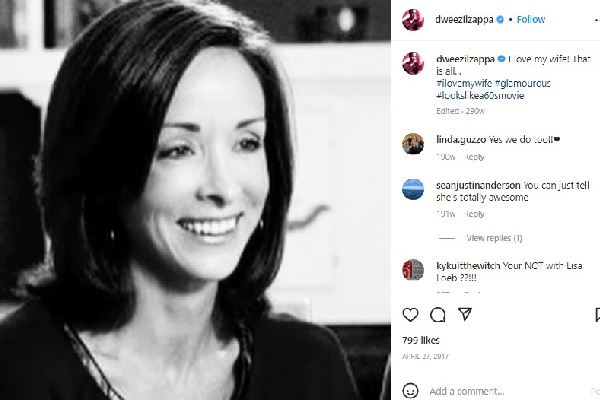 Furthermore, Dweezil is a loving husband who has always been there for his partner. The way the couple supports each other is commendable as well. But, several sites suggest that Dweezil filed for divorce from his second spouse in December 2021.

The LA native is someone who embraces fatherhood. He makes no compromises in showering his children with unconditional love and support. The musician is a kind and giving father of two daughters, Zola Frank Zappa and Ceylon Indira Zappa. He welcomed his little girls with his first wife.

Dweezil Zappa's eldest daughter, Zola, was born in 2006. She has turned her attention to the modeling industry. As such, she is currently associated with IMG Models. Furthermore, Dweezil's firstborn joined the agency in late 2020 and has modeled for brands ranging from Gucci to Givenchy.

Similarly, Zappa's youngest daughter, Ceylon, was born in 2008. Unlike her sister, Zola, Ceylon prefers to stay away from the spotlight. Nonetheless, Dweezil is a wonderful dad to his kids, and they seem to share an incredible bond.

Overall, the rock guitarist aims to preserve integrity in his endeavors, following in his late father's footsteps both musically and personally. Dweezil has faced several highs and lows in his life, yet nothing seems to stop him from achieving big things. We wish him the best in his future projects.