Although widely popular as the eldest child of legendary rock-and-roll artist Frank Zappa, Moon Unit has earned her fame and is a successful actress. Photo Source: Moon's Instagram.

Moon Unit Zappa, better known as Moon Zappa, is an American actress, author, and part-time comedian. Although widely recognized as the eldest child of prolific musician Frank Zappa and his second wife, Gail Zappa, Moon has earned a name for herself and established herself as a notable figure in the entertainment industry.

The American actress first came into the limelight after being featured in her father's hit single "Valley Girl" when she was only 14 years old. Since then, she has acted in numerous popular movies and TV series and received international acclaim for her portrayals.

The extreme versatility shown by Moon throughout her career has gathered her a decent fan following over the years. Consequently, her admirers are eager to get a glimpse into her personal life. If you're one of them, stick with us until the end as we uncover Moon Zappa's biography before you.

On 28th September 1967, Moon was born in New York City as the first child of rock-and-roll artist Frank Zappa and his second wife, Gail Zappa. She was given her second name, "Unit," referring to her birth, making the Zappa family a unit.

The American actress attended Oakwood School in North Holywood, California, and spent most of her childhood around the neighborhood.

Growing Up In Crazy Zappa Household

Being raised by a sophisticated workaholic musician and an open-minded mother, Moon Zappa didn't have a typical childhood neither did her three other siblings. Her father, Frank, was always away from home composing new tunes in the studio. In addition, Moon recalls being awakened by the sound of her father arriving late at night, about 1 or 2 a.m.

Zappa children didn't have any restrictions during their upbringing; they could swear and even call their parents by their first name. Furthermore, Moon had mentioned that it was a free zone in her birth house, and they could be themselves without any reprimand from their parents. Moon was even allowed to have slumber parties at her home. 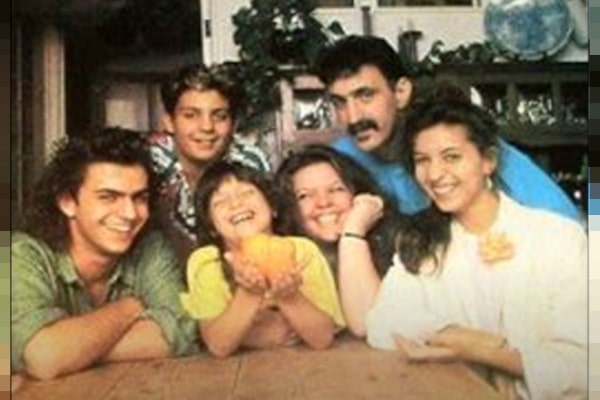 Moon Zappa used to live with her parents along with her three younger siblings in California during her childhood. Photo Source: Social Media.

Nevertheless, Moon did have a negative effect as a result of growing up in the Zappa family. By the age of 18, she had to go to a therapist and frequently complained about the problems created by being the children of a famous father.

Following the death of Moon Unit's mother, Gail, in October 2015, the Zappa children became the rightful owners of the Zappa Family Trust. The Zappa Family Trust is in the authority of the broad musical legacy left by Frank Zappa and profits from merchandise sales and the republishing of his songs and albums.

Additionally, it also permits or denies the use of Zappa's name and files lawsuits against inappropriate use.

However, the matriarch's death revealed that the Trust's authority was given to the younger sibling pair, Diva and her brother Ahmet, with 30 percent shares each. And the older siblings Moon and Dweezil were given smaller shares of 20 percent each. This unequal division of Family Trust created an ugly feud between the siblings.

Moon and Dweezil, as beneficiaries, would not receive any funds from the Trust until it seemed to be profitable. Moreover, older siblings Moon and Dweezil had to ask Ahmet for permission before using their father's song and name.

The inheritance battle of the Trust lasted quite a while and was a hot topic in media. Nonetheless, the feud settled after Zappa children agreed to distribute any profits earned by Trust equally among themselves.

Moon got associated with the entertainment industry from an early age. The young actress first came into the limelight after her monologue featured in her father's hit single "Valley Girl" when she was only 14 years old. Following the song's release, the teenage Moon became instant fan favorites and began getting offers for acting roles from various popular franchises.

In her teenage years, Moon appeared in several songs by her brother, Dweezil, including "My Mother is a Space Cadet," "Let's Talk About It," and others.

Afterward, Frank Zappa's daughter Moon began acting, featuring in guest appearances on sitcoms including CHiPs and The Facts of Life. Throughout the 1980s, she worked as a video jockey for MTV and acted in films such as National Lampoon's European Vacation and Nightmares.

In addition, she has since appeared as a guest star on television shows such as Normal Life, The Super Mario Bros. Super Show, Last Will, Curb Your Enthusiasm, How I Met Your Mother. 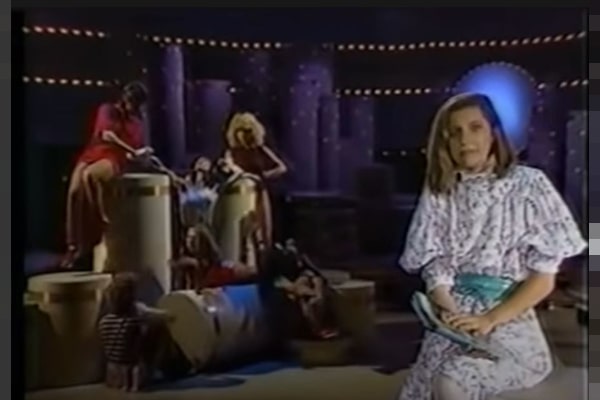 The fourteen year old Moon came to the limelight after being featured in her father's hit single "Valley Girl." Photo Source: Social Media.

In addition to her acting career, Moon Unit has worked as a part-time stand-up comedian and appeared in a number of well-known comedy events.

She also published her first book, "America, the Beautiful," in 2001, introducing herself to the public as an author.

Moon Zappa Net Worth And Earnings

Moon has shown extreme versatility throughout her career and worked in numerous fields, establishing herself as a successful actress, author, and comedian. As such, people can't help but wonder about all the fortunes she has amassed through her engagement with different professions over the years.

Here, we will discuss Moon Zappa's net worth and break down her earnings in brief.

Earnings As An Actor

As an actor, Zappa has collected 31 acting credits on IMDb and has been part of popular films and series franchises such as "How I Met Your Mother," "Nightmares," "Last Will," and so on. The funds she has collected from all the portrayals she has done are bound to increase her revenue.

Although the exact income for her roles is not disclosed, we can safely assume she earned a couple of thousand dollars, given her stardom and experience in the field.

Earnings As A Comedian And Author

As mentioned earlier, Zappa has also performed as a stand-up comedian and performed in multiple well-known comic shows. Furthermore, she is an author and has worked for numerous magazines and even published a book named America, the Beautiful in 2001.

Moon must have collected a sizable amount of money from her work in these fields.

Initially, the shares of the Zappa Trust were distributed unequally by mother Gail Zappa among her children. However, after decades of feuds, the Zappa children finally agreed to distribute any profit made by the trust in March of 2019.

Hence, Moon is entitled to 25 percent of the share in the Zappa Trust. The American actress is sure to collect decent assets from the earnings of the Trust.

Earnings As A Yoga Instructor And Collaboration

Recently, Zappa has shifted her focus to the field of yoga, where she has been actively promoting physical, mental, and spiritual disciplines. In addition, she has been hired as a yoga instructor at Yoga World Heart. Similarly, she has teamed up with Teo.o.graphy, an online retailer of organic teas, and produced her own tea, "Moon Unit Tea," which is sold at the price of $20.50.

Thus, she is bound to earn a fair sum of money from her teachings as a yoga practitioner and through her sales of organic tea products. 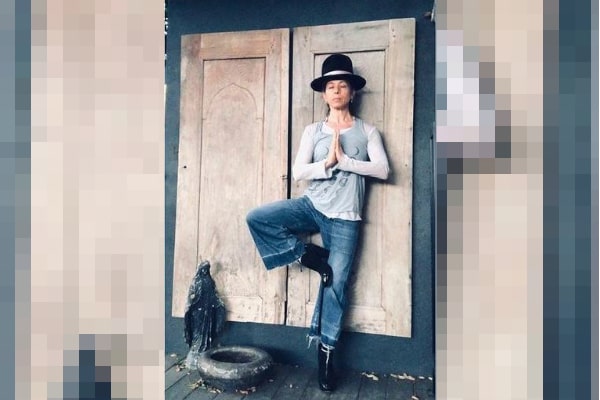 Since 2019 Moon Zappa has directed her attention toward world of yoga practices and actively engaged in teaching its importance. Photo Source: Moon's Instagram.

According to Celebrity Net Worth, Moon Unit Zappa has a net worth of $3 million. Aforementioned, her income primarily consists of salaries she has earned from the entertainment industry.

The American celebrity Moon Unit Zappa was married to the famous drummer and rhythm guitarist of Matchbox Twenty, Paul Doucette, for almost a decade. The couple met through their shared passion for music in early 2000.

The couple fell in love and developed an intimate relationship. After a couple of months of romance, Doucette and Zappa got married in June 2002. The duo welcomed their only child two years later, whom they named Mathilda Plum Doucette.

Divorce And A New Journey

Unfortunately, after nine and half years of marriage, Moon filed for divorce in early 2012. According to the court documents, Zappa had cited irreconcilable differences as the reason behind their separation.

It took two years for the divorce papers to be finalized, and the couple officially split in 2014. Furthermore, the court decided that Moon Zappa's daughter Mathilda would live with her. 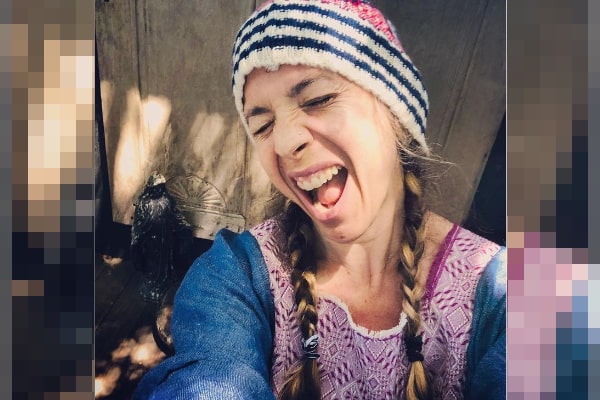 The American actress, Moon seems to be enjoying her single life and is not looking to date anyone. Photo Source: Moon's Instagram.

Following their divorce, Moon Unit Zappa's ex-husband married Erin McColl in July 2015. According to various sources, the duo dated for two years before getting married.

Whereas the eldest child of Frank Zappa, Moon, is happy to be single and does not seem to be dating anyone. Besides, she has directed her attention to meditation and yoga and often shares the importance of physical and mental well-being on her social media.

Likewise, she has been enlisted as a yoga instructor at Yoga World Heart and regularly spreads teaching of yoga on the official website's podcast.