Luan Oliveira grew up skateboarding in Brazil but has since established himself in the skating world. He started skating at the tender age of ten and has since won several Tampa Pro titles, SLS Championships, and many other tournaments.

The Brazilian skateboarder's life story is a fairytale come true with a healthy dose of hard work and luck favoring him. Having come from a difficult background, he knows the struggle one has to face in life. So, let's learn more about Luan Oliveira's biography and the hurdles he faced before becoming one of the most recognizable skateboarders in the world.

Luan Oliveira was born on September 22, 1990, and brought up in Porto Alegre, Brazil. His childhood was filled with difficulties as his parents gave him up right after his birth. He was then raised by his grandmother, who tried to provide for her young grandson as best as possible. While there are no mentions of his siblings on any online platforms, on Instagram, he has addressed a woman as his little sister. Oliveira's sister, Bruna Badra, is a constant face on his page.

The Brazilian athlete grew up in a poverty-ridden community where young kids used to carry guns, and violence was the way of life. Before Oliveira could find himself in the street like other boys, he found a passion for skateboarding. He received a small plastic board as a gift at the age of nine, and after watching someone else shredding on a board, he too started practicing.

After finding skateboarding, Luan Oliveira's life revolved around the sport, and he spent most of his time working on his skills. Tragedy struck in 2005 when he lost both his father and grandmother in the same week. After this, he directed his total focus into skateboarding and found a family within the community.

Having started skateboarding when he was just ten, Luan managed to perfect an arsenal of tricks. He participated in a street contest by convincing a local skate shop to provide him with the bus and entry fee. He placed second in the competition, and with the prize money he received, Oliveira paid for bus tickets to compete in other events.

This cycle continued for years before one of the YouTube videos featuring Oliveira's tricks was found by Sidewalk magazine's Ben Powell, who forwarded it to popular skateboarder Geoff Rowley. Luan was then sponsored by Geoff's company, Flip Skateboards, and moved to the US in 2007.

After moving to the States, Luan started participating in huge events and managed to garner attention from the world. He won back-to-back Tampa Am titles in 2008 and 2009 before turning pro in 2010. Since then, Luan Oliveira has skated in several tournaments, winnings several of them. Given below are some of the competitions that he took part in and his positions:

Aforementioned, Luan Oliveira has participated in several contests and won a few of them. He is a crowd favorite in tournaments and has wowed the audiences by showcasing difficult tricks like Nollie Hardflip Noseslide 270 Shove-It, Blackside Flip, Hardflip, and Switch 360 Flip, among others. Oliveira has also consistently scored an average of 9 points or more in the Street League Competition and is a member of the 9 Club.

Luan Oliveira Net Worth And Earnings

As stated above, the Brazilian-born skateboarder has competed in many tournaments and even won major ones in both amateur and professional careers. Therefore, Luan Oliveira's net worth includes the prize money he received from these events.

Luan's first big win in a skateboarding contest was as an amateur in the 2008 Tampa Am. He also won the same title the following year and cashed in a significant amount from these events. He then turned pro and has secured first place in Tampa Pro Finals twice. Nyjah Huston pocketed $10,000 in prize money after winning the Tampa Pro Finals in 2020 so, Oliveira must have received similar amounts when he won in 2013 and 2015.

Furthermore, Luan was the winner of MMC South Africa Pro/Open Street Finals in 2012 and undoubtedly took home thousands of dollars along with a trophy. Also, he has placed 2nd and 3rd in many competitions and received a considerable amount as prize money.

Luan Oliveira's fortune also consists of his earnings from various sponsorship deals he secured throughout the years. He has been sponsored by Rowley's Flip Skateboards from the beginning of his career. He has starred in numerous videos from the company and also put out decks with various graphics over the years. One of the boards, Oliveira Tin Toy 8.1” x 31.5”, can be purchased in the official store and is priced at $59.99.

Apart from Flip Skateboards, Oliveira is also sponsored by Nike SB, Grizzly Griptape, Matriz Skate Shop, Diamond Supply Co., Spitfire Wheels, Bronson Speed Co., and Independent Trucks. With Nike, Luan put out Nike SB Zoom Janoski Slip RM Luan Oliveira shoes, which is reportedly out of stock at the moment. This shows that the skateboarder is popular among the fans, and as a result, Oliveira's income from these sponsorships must have been substantial.

With a massive net worth and wealth to his name, Luan Oliveira now lives a lavish lifestyle. Having gone through a difficult childhood, the Brazilian athlete has come a long way to find success and is now enjoying his life traveling and skating around the world. While he must have faced hard times as a child, he now rides a black Mercedes, which undoubtedly cost him thousands of dollars.

The popular sportsperson is also a tattoo enthusiast and has several big and small designs on his arms and back. While he has not revealed the meanings behind his inks, Luan Oliveira's tattoos are a major part of his identity. He must have paid a large sum to get his preferred designs inked in his skin and shows them off in his pictures frequently.

While Luan has found immense success in his career and has not hesitated to share it with the world, he has not talked much about his love life. Unlike many sportspeople in the world, the Porto Alegre native is secretive about his romantic life, so it is no surprise that Luan Oliveira's girlfriend/wife is a mystery to all. 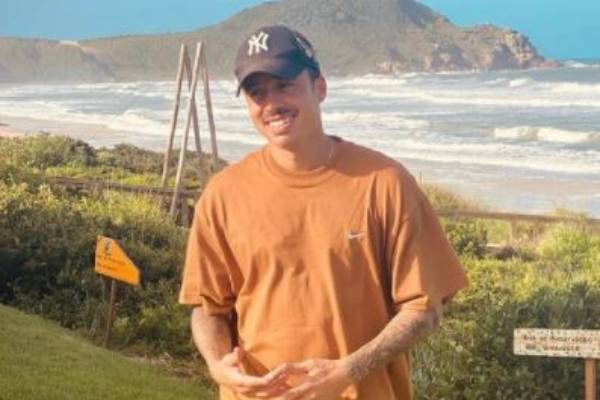 Luan Oliveira has not talked much about his love life and relationships. Image Source: Luan Oliveira Instagram.

However, let's hope that he opens up about his romantic life in the coming days, and we get to meet the person who is Luan Oliveira's other half.