Geoff Rowley is one of the most influential skateboarder in the world. Image Source: Geoff Rowley Instagram.

Geoff Rowley is a well-known professional skateboarder named the Skater of the Year in 2000 by Thrasher Magazine. He is regarded as one of the most influential skateboarders of all time and even has a trick named after him.

The English skateboarder moved to the States in 1994 to continue his skateboarding dream. He has since found worldwide fame and also earned a considerable sum from his career. Because of the stories about his upbringing and his earlier days as a skateboarder, fans are eager to know about him. So let's learn more about Geoff Rowley's biography and other personal details.

Geoff Rowley was born in Liverpool, England, on June 6, 1976, as Geoffrey Joseph Rowley Jr. As per the skateboarder, during his childhood, Liverpool was a tough city with the highest unemployment and teenage pregnancy rate. Growing up in the city was tough; however, Rowley was fortunate enough to have a close-knit family.

While his time growing up in Liverpool was tough, Geoff learned about skateboarding in school there. Rowley started skateboarding in the late 1980s in his home city. He was very interested in the sports and used to skate for the entire day while his friends would only skate for a short amount of time.

Even though he found out about skateboarding from the kids from his school, Geoff was among a few others who practiced and had dreams of turning professional one day. Geoff Rowley's parents were also supportive of his choice, so; he was able to travel to the United States.

While still in Liverpool, Geoff Rowley was sponsored by the company Deathbox Skateboards which was renamed Flip Skateboards. He was also part of the Gullwing team at that time and was regarded as one of the best skateboarders in Europe. Deathbox's co-founder, Jeremy Fox, also praised the young skateboarder and talked about him creating waves once he set foot in the US.

Then in 1994, Geoff and his fellow Flip team riders, Rune Glifberg, Andy Scott, and Tom Penny, moved to Huntington Beach, California. As expected, Rowley garnered attention from the skateboarding world and was featured in TransWorld Skateboard magazine's cover page only two weeks after the move.

After this, Geoff Rowley started to participate in various skating events and also making skate videos. He was still skating for Flip Skateboarders when he was named Skater of the Year by Thrasher Magazine in 2000. Geoff even has a trick named after him, Rowley-Darkslide.

In his early days, Geoff was influenced by professional skateboarders like Kris Markovich, Danny Way, and Natas Kaupas. He also skated with Ed Templeton and learned a lot from him. Years after his debut, Rowley himself is recognized as one of the most influential skateboarders of all time.

Geoff Rowley Net Worth And Earnings

In addition to the title of one of the most influential skateboarders of all time, the Liverpool-born skateboarder has also amassed a vast fortune from his career. Geoff Rowley's net worth includes the amount he earned from business ventures as well as his income from sponsorships.

Income From Sponsorships And Collaborations

As an upcoming skateboarder in Liverpool, he was sponsored by Siesta, Airwalk, Jeremy, and Gullwing. He then joined Flip Skateboards and was with the company till 2015. Some of the other sponsors are Vans, OJ Wheels Independent, Lost Art Skate Shop, Volcom, and MOB while skateboarding. However, one of the longest and most successful collaborations for Geoff Rowley was with the shoewear company, Vans.

Geoff Rowley joined the Vans family in 1998 and has since featured in several commercials. He has also collaborated with the company and released several show models throughout the years. Also, Rowley's Vans collection also includes apparels, some of which are listed below:

For those interested, all of the items given above can be purchased on the company's official website. Geoff Rowley must have pocketed a significant amount from the sales of these products as these are his designs.

Income From Skate Videos And Games

Like many skateboarders, Geoff has also directed and produced several skate videos throughout the years. He co-directed all of the Flip videos that he was in including, Flip: Sorry, Flip: Really Sorry, Flip: Feast Tours, and Flip: The Weight of the World.

In addition to these skate videos, Geoff Rowley has also featured in movies and several of Tony Hawk's video games. He was part of the games Tony Hawk's Pro Skater series; he also appeared in the 2011 film Little Birds and was in numerous documentaries about skateboarders. 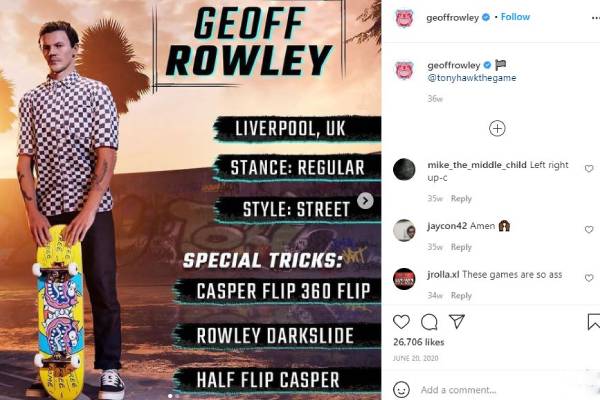 While the earnings from these videos, movie appearances, and video games, might be small compared to the amount he receives through Vans partnerships, Geoff Rowley's net worth must have benefitted from it.

Apart from being a professional skateboarder, Geoff Rowley is also an entrepreneur. He was the co-owner of Flip Skateboards and launched his own company, Civilware Service Corporation, in July 2013. In an interview, Rowley revealed that his new business venture was a creative outlet for him, and he wanted to repay the time and money spent by his customers with an unparalleled level of commitment. It seems like he has managed to fulfill his promise as Civilware now sell different products, including knives, apparel, and other accessories, some of which, alongside their prices, are listed below:

In addition to the abovementioned items, Civilware also sold a limited edition Pathfinder Axe in 2013. The axe cost $275 per piece, and the company also sold coffee beans for some time. While these products are now discontinued, Geoff Rowley's net worth must have benefitted from its sales.

Talking about his personal life, the Liverpool-born skateboarder is a married man and a father to two beautiful children. Rowley and his wife, Sabrina Rollo, have been together for more than a decade as they celebrated their tenth anniversary in October 2019.

The pair met in a coffee shop in Long Beach, where Geoff Rowley's wife, Sabrina Rollo, worked. They started dating soon after and were engaged three months later. The lovely couple then got married in 2009 and have been enjoying their marital life since. 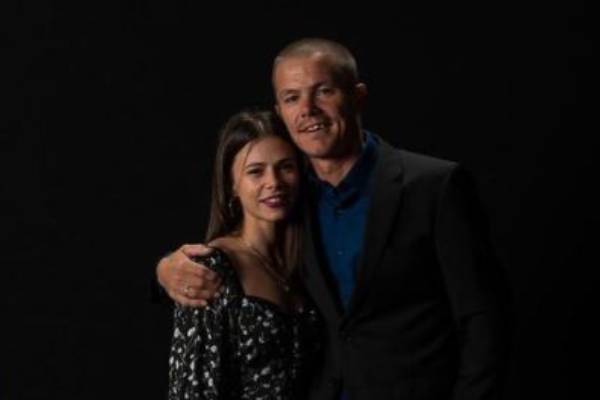 In their decades-long marriage, the skateboarder and his wife have been blessed with two kids. Geoff Rowley's children, Rex Rowley and Vera June Rowley, are both their father's mini-me. Rex and Vera have wrapped their dad on their little fingers, and Geoff also does not hesitate to show his love for them.

The famous skateboarder and entrepreneur's wife, Sabrina's Instagram, is set to private, Geoff Rowley's kids are all over his social media pages. And while his daughter, Vera, is artistic and prefers painting, Rex, seems to be following in his father's footsteps. Let's hope we get to know more about Rowley's children and family life in the coming days.