Guilherme Samaia is a Brazilian racing driver who won the Brazilian Formula Three with the Cesario F3 racing team. Samaia is a growing talent in the Formula series, having competed in multiple series such as in Brazil and Europe. Guilherme is a racer who competes in the FIA Formula 2 Championship with the Charouz Racing System, having previously been associated with Campos Racing in 2020.

Guilherme, who started his racing journey in 2013 professionally, has won several championships and races throughout his astounding career. There's no doubt that Samaia has established himself as one of the best up-and-coming and prominent racers in the sports world. Despite this, the Brazilian still has a long way to go, and there's no doubt that he will achieve significant success in the future.

Furthermore, the driver's dream of racing in the Formula One stage and compete among the best racers in the world would surely be a driving factor for the determined Brazilian. So, for now, let's learn more about the talented racing car driver, Guilherme Samaia's biography, and his professional career.

The Brazilian talent Guilherme Samaia was born on the 2nd of October 1996 in the city of Sao Paulo. Samaia is the younger one of the two sons that his parents have. But the Brazilian racer has not disclosed any information on his brother, Claudio Samaia, despite a few birthday wishes. Similarly, no knowledge of Guilherme Samaia's mother or his father is out in public. But the racer is extremely close to his parents and is thankful for all the motivation and encouragement that they have been providing throughout his career. Furthermore, the racer's parents, along with his brother, constantly visit Samaia during his race events. 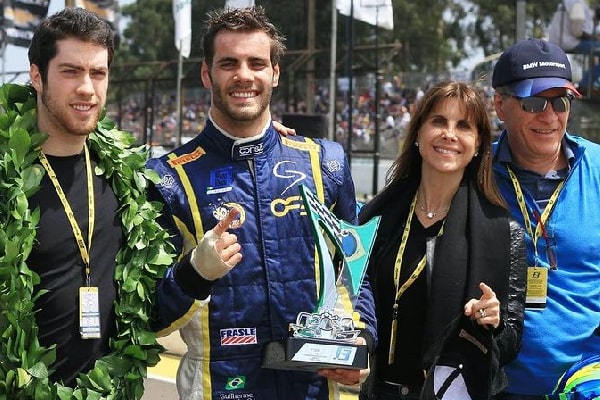 Guilherme Samaia has a family who supports him in all his ventures. Image Source: Guilherme's Instagram.

Samaia was born and raised in Brazil and finished his primary education in the same country. He did not travel too much before starting kart racing professionally. But, his love for racing and his impressive races throughout the Brazilian Karting series outran his school works. As mentioned earlier, the young Brazilian is supported by all his family members, and his parents were the ones who helped Guilherme develop a passion for racing.

The love and passion, along with his early start at the sport during his early teens, is what shaped Guilherme Samaia's career to what it is now.

Career As A Professional Driver

Guilherme Samaia began karting from an early age. He competed in multiple karting series in Brazil before joining the lower formulas in Brazil. Guilherme started racing in the Formula Junior Brazil Championship for Satti Racing Team in 2013. He switched to Formula 3 Brazil Light series in 2015, racing for Cesario. He won his first single-seater series with thirteen podiums in sixteen races, including the six wins with thirty points clear of the runner-up Matheus Muniz. The racer jumped up to Formula 3 Brazil in 2016 and finished third in the season. Guilherme Samaia had an amazing racing form in Brazil, with multiple victories and races that got him recognization from Europe.

In 2017, Guilherme joined the Double R Racing team and participated in the British Formula 3 Championship. His two podiums in Snetterton and Spa-Francorchamps earned him a position of 13th in the series. Additionally, he finished behind Jamie Chadwick and Enaam Ahmed.

In the same year, Samaia also made his Euroformula Open Championship debut with Carlin Racing Team. He switched to the Italian RP Motorsport in 2018. He finished the season in the 6th position, where his teammate, Felipe Drugovich, won the Championship with 405 points. Samaia switched to Teo Martin Motorsport for the 2019 season. Furthermore, he had an amazing run at Formula 3 and Euroformula, but he graduated to a higher league after the 2019 season.

Campos Racing Team announced on the 17th of February that Guilherme would join their team after a successful post-season test in Abu Dhabi. Along with teammate Jack Aitken, Samaia raced in the 2020 FIA Formula 2 Championship. His season at F2 was not good as he would've expected. After a disappointing inaugural season, the Brazilian tested for the Charouz Racing System at the post-season test in Bahrain. Furthermore, the following are some of the Brazilian's major series and their results:

The young Brazilian has not been in any major crash, but there's no saying what could happen next in the professional race car driving sport. Though, the racer was involved in a small accident in 2019 in F2. Guilherme Samaia's crash did not cause any major injuries to the racer, but it has made the Brazilian more careful while driving. Despite this, all the amazing season he's had and his consistently good performance would surely raise Guilherme Samaia's net worth to quite an amount.

Guilherme Samaia Net Worth And Earnings

Throughout his racing career, Guilherme Samaia's net worth would be gathered up to be quite an impressive amount. This is possible due to his multiple wins, podium finish, and involvement in various races and series mentioned above. Samaia has always been one of the top performers in most of the races he's been involved in. 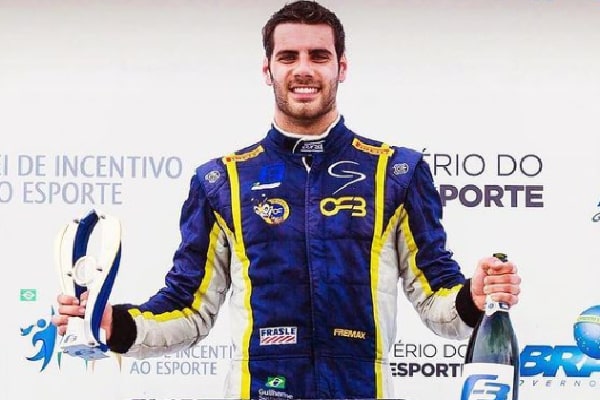 Guilherme Samaia comprises of the prize money he received for winning the races he partakes in. Image Source: Guilherme's Instagram.

Additionally, his consistency at the Formula 3 and Euroformula event prized at a huge amount would also help his net worth. Furthermore, Samaia is also sponsored by Pirelli, Masterpack, Michelin, and many other brands. All these sponsors would surely provide a good income for the Brazilian Racer.

All the income Guilherme Samaia has been making would surely help him live a fulfilling lavish life.

As mentioned earlier, Guilherme is a fairly young Brazilian racer who's been in motorsport professionally from an early age. The racer might have had a few girlfriends despite his young age. However, Samaia is not so open about his personal life in public forums. Anyway, we can assume that Guilherme Samaia might have a special someone in his life, despite him not sharing any information on it in public.

Anyway, the decision to not open up his lover's identity even if he has one is up to the Brazilian racer himself. Additionally, despite the lack of information on Guilherme Samaia's girlfriend, we hope that he is happy with whoever he's with. Along with that, we wish Samaia a successful lovelife and possibly some children in the future.