Felipe Drugovich is a Brazilian racecar driver competing in Formula 2 with the UNI-Virtuosi racing team. Felipe is one of the bright young racing prodigies from South America who's managed to have his name known from an early age. As a team member of RP Motorsport, MRF Racing, and Van Amersfoort Racing, Drugovich has been able to win multiple racing series as a teenager. His love and passion, along with the support from his family, have made him one of the most determined young racers on the current motorsport ladder.

Felipe Drugovich has been kart racing in numerous karting tournaments throughout the years. Subsequently, he has transitioned into the single-seater racing world seamlessly, gaining the attention of countless fans in the process. Furthermore, there's no doubt that Felipe has established himself as one of the prominent racers in the motorsports world. Yet, he still has a long way to go, and there's no doubt that the promising Brazilian will achieve significant success in the future. So, for now, let's learn more about the South American racing car driver, Felipe Drugovich's biography, and his professional career.

The youthful racer Felipe Drugovich Roncato was born on the 23rd of May, 2000. He grew up in Maringa, a city from the Parana state in Brazil. Drugovich was born into a family involved in motor racing. Despite this, Felipe Drugovich's parents and their identity are not known to the public. The collective love for racing in his family caused the love for motorsports to develop in Felipe. Additionally, with time, this love changed into a passion and subsequently into a profession for Felipe Drugovich. 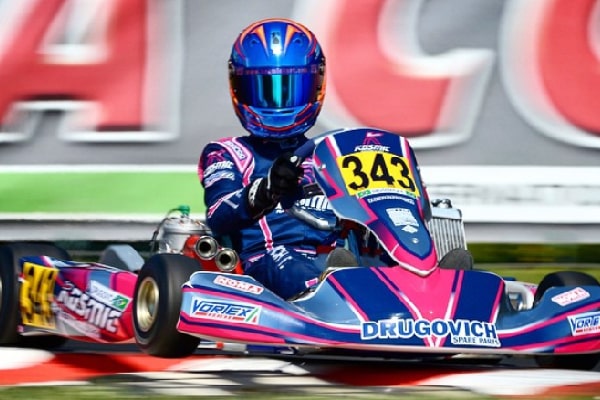 As mentioned above, Felipe Drugovich was both born and raised in Maringa, Brasil, and that's where he got his primary education as well. Despite his education in Brasil, Drugovich traveled to various countries throughout his teenage years for karting tournaments. Felipe has been karting since 2008, when he was just an eight-year-old. Since then, the talented racer has successfully changed his amateur racing into a professional career.

Felipe Drugovich's career has been shaped into what it is because of the efforts that he put into his love and the passion for sports since his childhood.

Career In Professional Racing And Net Worth

Felipe has participated in multiple go-kart racing tournaments from 2008 to 2013 in Brazil. He continued and developed his racing talents when he went to Europe to kart race. Drugovich drove for well-known teams in Europe such as ART Grand Prix and Kosmic Racing Team. There, Drugovich achieved great results in many important international championships

.Felipe Drugovich had his single-seat race car debut in the ADAC Formula 4 Championship in 2016. He competed in the MRF Challenge 2016/17 in the Middle East and won a race in Dubai. The following Season, Felipe switched to Van Amersfoort Racing and made his debut in the Italian F4 with the team. Subsequently, through his success in the lower level of professional racing, Drugovich got to race in the Euroformula Open and GP3 Series and eventually the Formula 3 Championship.

In February of 2019, it was announced that Drugovich would race with the Carlin Buzz Racing and raced with them in the inaugural season. Drugovich scored eight points in the 2019 season and finished in 16th place. Felipe scored more points than both of his teammates, Logan Sargeant and Teppei Natori, combined.

Felipe Drugovich tested as a driver during the post-season testing at Yas Marina and eventually signed with the MP Motorsport racing team for the 2020 season and partnered with Nobuharu Matsushita. Felipe won the Austria Round 1 and Spain sprint races. Additionally, Drugovich also raced in the feature race at Bahrain Round 1.

In the 2021 Sprint Race 1 at Monaco, Felipe missed out on the top spot by one a few seconds after Guanyu Zhou. He is currently in the 12th position in the overall FIA Formula 2 Championship. However, since the series is ongoing he might improve his performance and even win a few of the races.

Felipe Drugovich has won multiple championships and has had many successful tournaments in his ever-expanding career. Some of his top and well-known victories are mentioned below:

While racing for MP Motorsport in 2020 in the FIA Formula 2 Championship, Felipe was involved in a car crash during a feature race at Spa-Francorchamps. This was due to Felipe's own fault, and he was penalized for the incident. Luckily, Felipe Drugovich's crash did not cause any serious injury to the racer, and he has been racing with the UNI-Virtuosi racing team ever since.

The Brazilian also streams gaming and racing content on his Twitch channel. During the off-season in professional motorsports, Twitch has been a great way for him to engage with his fans. Furthermore, all these tournaments that Felipe has been a part of would surely make up a large amount as Felipe Drugovich's net worth.

According to the Times of India, the prize money for the MRF Challenge Formula 2000 is set at Rs. 6.5 million or around $68K. Felipe Drugovich was the winner of the tournament's 2017-18 season. Furthermore, the prize had to be distributed among the top racers.

The prize money from the European Formula 3 championship is €500K or $608K. Felipe also won the Formula 3 series in 2018, along with Euroformula Open in the same year. Along with this, Felipe has been a part of all the countless races that would surely add a huge sum to Felipe Drugovich's net worth. 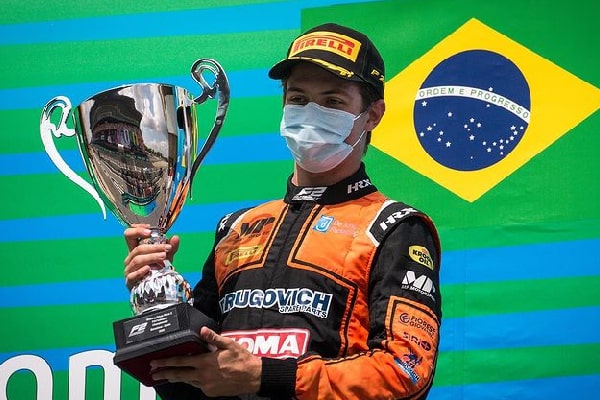 Felipe Drugovich has won multiple series during his career and earned a fortune in the process. Image Source: Felipe Instagram.

Since he's a top emerging racer, he also must have multiple sponsors and endorsed many well-known brands as well.

All the riches that Drugovich has accumulated throughout his career would surely allow the Brazilian to live a lavish life with the people he loves.

Felipe is a young South American racer who's been in the racing sport professionally from an early age. As expected of a popular teenage prodigy, the racer must surely have had multiple relationships throughout the years. However, Drugovich is not so open about his personal life in public. Furthermore, it's safe to assume that Drugovich might have a special person in his life, despite not sharing any information on it.

Anyway, his decision not to disclose the identity of his lover even if he has one is up to the Brazilian racer himself. Additionally, despite the lack of information on Felipe Drugovich's girlfriend, we hope the racer is happy with whoever he's with. Along with that, we wish Drugovich a successful life with a loving spouse and maybe some kids in the future.