Ndamukong Ngwa Suh, in short, Ndamukong Suh, is an American football player. He plays in a defensive end for the Tampa Bay Buccaneers of the National Football League (NFL). Having won various awards and trophies in his career, Suh has also clinched Super Bowl LV with the Buccaneers. He is also the founder of the Suh Family Foundation, which helps develop education, health, wellness, and empowerment in local communities.

The 6-foot-5-inch tall and 300-pound giant athlete is considered as one of the greatest defensive tackles of all-time in NFL history. His sturdy tackles continue to keep the audience on the edge of their seats. Wearing jersey no. 93 in his games, Suh dominates his opponents with his massive on-field impacts. So, how did Ndamukong Suh became an NFL Star? Let's study Suh's biography in brief.

Ndamukong Suh was born on Tuesday, January 6, 1987, as the second-oldest child of Bernadette Suh and Michael Suh. Born and raised in Portland, Oregon, Ndamukong Suh's siblings consist of three beautiful sisters, including his older sister, Odette Lennon Ngum Suh, who is his manager and also his best friend. His cousin, Kameron Chatman, plays for the Michigan Wolverines men's basketball team.

Suh's father, Michael Suh, is from Cameroon who played semi-professional soccer in Germany. He is a mechanical engineer and machinist by profession and owns his own heating and cooling company in Portland. His mother, Bernadette Suh, is a native of Spanish Town, Jamaica. She graduated from Southern Oregon University and worked as an elementary school teacher. They married in 1982 in Portland. 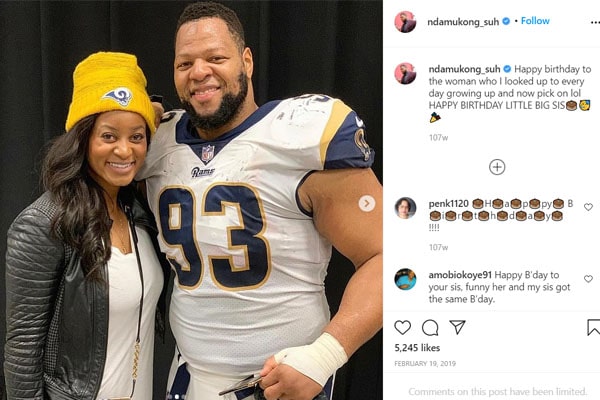 Suh's older sister, Odette Lennon Ngum Suh, was a soccer player at her collegiate level at Mississippi State University. She currently plays as a midfielder on the Cameroon women's national football team.

Ndamukong Suh showed athletic abilities from an early age. During his years in Grant High School, he excelled in football, basketball, and track and field. Later, he joined the University of Nebraska, where he graduated with a Bachelor of Science Degree in Construction Management in 2009.

Like most of the big NFL stars, Ndamukong Suh also started his football career from the collegiate level. He steadily began to develop his football skills and thrived with different teams in NFL.

After attending the University of Nebraska, he played for the Nebraska Cornhuskers football team for four years until 2009. Former Nebraska linebacker Cody Glenn and junior David Harvey became Suh's friends in his freshman year. In 2006, Suh was ranked as one of the best defensive tacklers on the team. Next season, he started 11 out of 12 games and recorded 34 tackles for the team. Suh continued his defensive form helping Nebraska to record its first shutout in the Holiday Bowl's 32-year history. He went on to earn first-team All-Big 12 honors and the Big-12 Defensive Player of the Year. Furthermore, he received several awards, including Bill Willis Trophy, Chuck Bednarik Award, Lombardo Award, and Outland Trophy. He ended his college career being a unanimous first-team All-American. 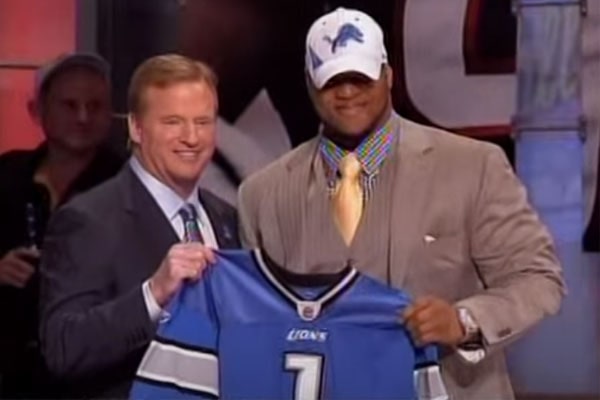 Ndamukong Suh was picked as the second overall by Detroit Lions in the 2010 NFL Draft. Photo Source: Social Media.

In the 2010 NFL Draft, Ndamukong was considered as one of the hottest prospects available. ESPN.com's draft specialist Mel Kiper, Jr. even described him as the most dominating defensive tackle he had seen in 32 years of his career. On August 3, 2010, Suh signed his first professional contract with Detroit Lions as the second overall draft. The deal was worth $68 million, which included a guaranteed $40 million over 5-year. He went on to win several awards and honors during his stay with the Lions.

On March 11, 2015, the Miami Dolphins signed Suh, who was at the peak of his career. The contract worth a massive $114 million with $60 million guaranteed pay made him the highest-paid defensive player in NFL history. The deal was to keep him for the next six years. However, on March 14, 2018, Suh and Miami's tight end Julius Thomas were released to free up a huge salary cap in the team. It is reported that releasing Suh incurred an astounding $22.2 million penalty for the Dolphins.

On March 26, 2018, Los Angeles Rams announced Suh's signing to a one-year contract worth $14 million. With some sturdy tackles along the way, Suh reached the Super Bowl for the first time in his career with the Rams, who lost 13-3 to the New England Patriots. Suh was not offered a new contract and again was available as a free agent in the market.

With one of the best defensive tackles on the market, the Tampa Bay Buccaneers quickly grabbed the chance to sign the veteran defensive tackle Suh on May 23, 2019. Suh's first season with the Buccaneers became a success, which gained him another contract for the next season. The agreement was again a one-year-long deal. 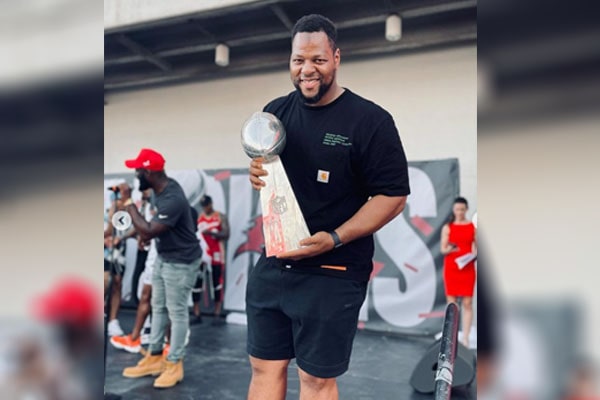 In February 2021, Suh reached his first Super Bowl final with Tampa Bay Buccaneers. He recorded 1.5 sacks on Patrick Mahomes on a 31-9 win over Kansas City Chiefs.

Coming to the 11th season of his NFL career, Ndamukong Suh has won various prestigious awards and trophies along the way. In 2009, he was nominated for Walter Camp Award, Heisman Trophy, Lombardi Trophy, and Outland Trophy. Furthermore, Suh has decorated his trophy cabinet with the following awards as well.

With such prolific recognitions, Suh is considered one of the best defensive tackles in NFL history.

How Much Is Ndamukong Suh's Net Worth?

Suh has come a long way since his 2010 NFL draft. With football being the fourth highest-paid sport in America, Suh might have accumulated a ton of wealth to his name. His income from contract signings, bonuses, salaries, and endorsements adds up to make him a multi-millionaire football player. So, how much is Ndamukong Suh's net fortune in recent times?

According to Celebrity Net Worth, the footballer earns about $13.5 million annually, and Ndamukong Suh's net worth is around $50 million. Since signing a contract worth $114 million with Detroit Lions in 2010, Suh has earned a colossal fortune as a professional footballer. Let's talk about his contractual earnings in more detail, as given in Spotrac.

Apart from professional contract earnings and salaries from various football teams, Suh has also penned several lucrative endorsement deals with Nike, Subway, Dick's Sporting Goods, Omaha Steaks, and Chrysler. Commitment with such international brands must have profited the footballer in the long term.

Besides earning a huge amount of income, Suh has also been fined for his actions on the field. According to Jay Glazer of Fox Sports, Suh was fined $100,000 for his illegal low block on Minnesota Vikings' center John Sullivan. Although he has paid over $200,000 in fines in his career, Ndamukong Suh's net worth has not been hampered by the charges.

To sum up, Ndamukong Suh's fortune is greatly influenced by his earnings from contracts, salaries, and endorsements. Now the question comes, how does he spend his money?

In July 2015, Suh splashed a whopping $6.5 million of his earnings to purchase an exquisite mansion on the Middle River. The Fort Lauderdale mansion signified his massive income at the time. However, in 2018, he had to sell the mansion for $5.85 million, which was well below his asking price of $7.29 million. In 2019, Suh bought a condo in Birmingham for an estimated $1.9 million. His expensive taste in homes has undoubtedly made his lifestyle more luxurious. 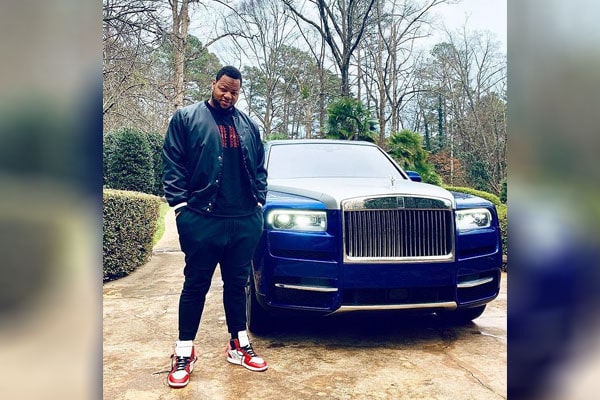 Suh also spends his wealth on expensive cars. He has a collection of some of the most exquisite cars in his garage. It looks like the NFL star is a huge fan of Rolls Royce.

Besides personal space, Suh is also seen investing his money in various sectors as an entrepreneur. He has racked up an impressive portfolio of investments, notably in real estate and hospitality. In an interview with Jason Kelly, Suh talks about following the advice from the oracle guru of Omaha himself, Warren Buffett. He further explains his collaboration with private equities and venture capital firms for his investments. So, what investment helps to boost Ndamukong Suh's net worth? Let's find out.

Suh is also keen on investing in the hospitality sector. He is an advisor in a Special Purpose Acquisition Company (SPAC). He is also the founder of Generals Restaurant Group, which owns and operates a chain of restaurants in America. Suh has also acquired the ownership of four Blue Sushi locations from his partnership with Flagship Restaurant Group. His restaurant portfolio further adds Bae's Hot Chicken, Super Deluxe, and Pizzana. He is also the co-owner of Hilton DoubleTree Hotel in Bloomfield, Michigan, and the Hyatt Hotel in Lincoln, Nebraska.

As for real estate investments, Suh is associated with HMS Development and Athletes in Real Estate (AiRE).

Apart from showing his defensive skills on the field, Suh has proved that he is an avid investor through his entrepreneurship skills too. His investments will surely yield a colossal return raising his net worth in the future.

Ndamukong Suh married his long-time girlfriend, Katya, in 2020. The duo met each other while attending the University of Nebraska in 2009. They continued their friendship for several years and eventually started a live-in relationship in 2018. The lovely couple exchanged their engagement rings in 2019 and finally got married in May 2020. While the world was facing COVID-19, Katya was officially declared as Ndamukong Suh's wife in a "not-so-traditional wedding" as per her interview with People. 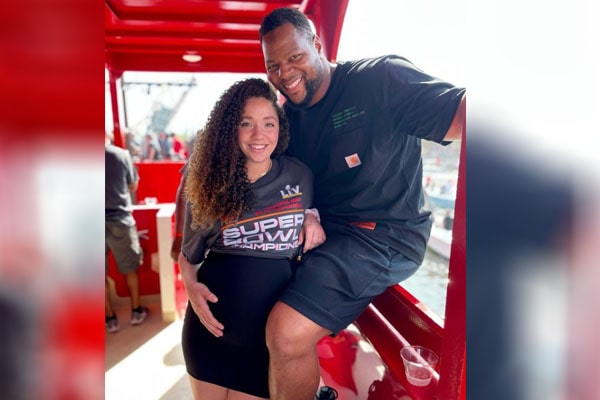 In late 2020, the world got the news that Ndamukong Suh and his partner Katya Suh were expecting. According to the People, the soon-to-be-parents are expecting twins. Ndamukong Suh's wife Katya is currently pregnant and shares her lovely maternal photos on her Instagram. Before adding two members to their family, the Suh couple also became new dog parents after adopting a Dutch Sheppard named Añejo.

While Katya is looking forward to being a mother of two, Ndamukong won the Super Bowl championship after eleven years in the football profession. It is also reported that Katya is working towards opening her own restaurant. Furthermore, the pair also founded the Suh Family Foundation and which defines Suh's generosity nature.