Aaron Donald has an estimated net worth of $40 million. Image Source: Aaron's Instagram.

Aaron Donald is a famous American football player for the Los Angels Rams in the National Football League. The professional athlete has won the NFL Defensive Rookie of the Year award and has also been named AP NFL Defensive Player of the Year three times.

Aaron helped the Rams win two Super Bowl Championships and was nicknamed "Cheat Code." The American sportsman has been referred to as one of the most outstanding defensive tackles of all time and is a well-known face in the football world. Let us know more about Aaron Donald's biography and career.

Aaron Donald was born in the house of a working-class family in Pittsburgh, Pennsylvania, on May 23, 1991. He was raised by his parents Archie Donald and mother Anita Goggins, alongside his two siblings. His older brother is named Archie Donald III, while his older sister is named Akita Donald.

In numerous interviews, the NFL professional has stated that his father, Archie, had been very supportive and inspired him to practice strength workouts every morning. As a kid, Aaron would wake up at 4 a.m. and train at a makeshift gym located in the basement of their house. Aaron's father, Archie, was also a former football player in college but had to retire from sports after injuring his knee cap. Though unable to fulfill his dream, Archie would always motivate his children to become successful as they are today. Aaron Donald's mother, Anita Goggins, later separated from his dad and moved to Duquesne, PA, where she found a job.

On the other hand, the footballer showed significant physical development through his training and went on to win several awards throughout his high school. He was awarded scholarships from colleges like the University of Toledo, Akron, Rutgers, and the Pittsburgh University. The talented sportsman chose to stay in his hometown and accepted the University of Pittsburgh's offer to play in the college team's defensive end. After finding immense success in his professional career, the sportsman bought homes for each of his parents with the help of his brother. He has even told his parents to lay down and let him do the work, something Aaron had always wanted to tell his father and mother since he was just a kid.

Donald started his college career with the Pittsburgh Panthers from 2010 till 2013. Throughout his college years, the talented sportsman had 52 appearances with 181 tackles and 29.5 sacks. As a junior, he earned his first-team All-Big East honors and was the most productive defensive player in the entire National College Athletic Association. "The cheat code" was named the Atlantic Coast Conference Defensive Player of the Year.

During an NFL scouting event, Donald was drafted by the St. Louis Rams for the NFL in the first round with the 13th overall pick. He had set a record for the fastest 40-yard dash time with a defensive tackle calculated at 4.68. He later signed a four-year deal with the Los Angeles Rams for a $10.13 million rookie contract, including a $5.69 million signing bonus and a fifth-year option. This must-have heavily impacted Aaron Donald's net worth.  He made his NFL debut against the Minnesota Vikings, contributing four tackles in the 34-6 loss. His talent and development in the game clinched him a spot among the five rookies selected for the 2015 Pro Bowl. The same year the American national was named in the NFL All-Rookie Team after winning the NFL Defensive Rookie of the Year award.

In the 2015 season, Aaron recorded a career-high of nine tackles and two sacks in a win over the Seattle Seahawks. He was also awarded his first NFC Defensive Player of the Week. He ended the season with 69 tackles and 11 sacks to earn his first All-Pro nomination in his NFL career and was again selected for the Pro Bowl. Following the 2016 season, Donald was fined $21,269 for unsportsmanlike behavior against the San Francisco 49ers. The following month, the NFL player committed a penalty against the Detroit Lions and was fined $18,231 for illegal conduct. He was ranked 15th on the NFL Top 100 Players of 2017. He ended the season with 41 tackles, 11 sacks, and five forced fumbles naming him the NFL Defensive Player of the Year. 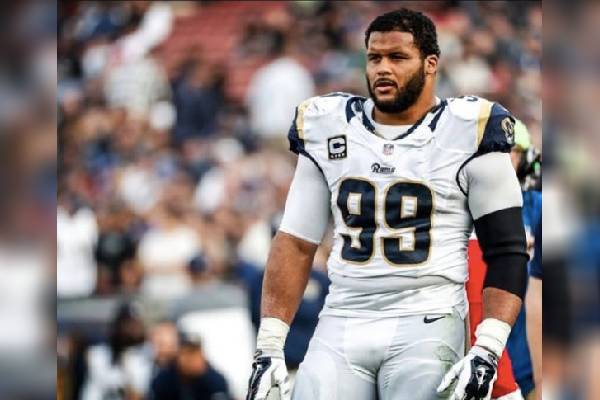 On August 31, 2018, the NFL player signed a six-year contract worth $135 million with $87 million guaranteed. The deal made him one of the highest-paid defensive players in the NFL history. In 2019 he was named the AP All-Pro first team and was again named the NFL Defensive Player of the Year after helping his team reach the Super Bowl LIII. But the Rams lost to New England Patriots. Here are the career stats of Aaron Donald with reference to Pro-Football.

The strong athlete has dedicated himself to keep on winning titles and awards. His gameplay and defensive abilities got him selected for the 2021 Pro Bowl. So far, the football star has received many awards. Some of them are mentioned below.

The dedicated footballer is still very optimistic about his career in the upcoming years. Aaron has already been performing in the top league for more than seven years and hopes to continue his form. He has secured an abundant amount of wealth through various endorsements, bonuses, salaries, and incentives.

According to Wealthy Gorilla Aaron Donald's net worth is estimated to be $60 million. He signed a six-year deal with the Rams for a contract worth $135 million with a signing bonus of $40 million, following the end of his rookie contract worth $10.13 million. As stated in Spotrac, the footballer received a signing bonus of $5.6 million with an average salary of $2.53 million through his rookie contract, which is now estimated to be $22 million.

Furthermore, Donald is endorsed by companies like Panini, Electronic Arts, and Dick's Sporting Goods, which adds up to $500K in his income. With few years left on his contract, we might see the NFL player sign a new contract soon and increase his wealth soon.

Besides his football career, The NFL star has a sweet and loving family. Aaron Donald was in a loving relationship with his long-term girlfriend, Jaelynn Blakey, though the pair have already ended their relationship. Jaelynn is also the mother of Aaron's bundles of love. They have a daughter named Jaeda Donald and a son named Aaron Donald Jr.

Following the split with his two children's mother, Aaron has moved on from his past relationship and is currently dating Erica Sherman. The Rams defender posted a video on his YouTube channel where he referred to Erica as his fiancee and gifted her a necklace with a picture of his two children as her birthday gift. This shows that Donald's fiancée, Erica, shares a close bond with her soon-to-be stepchildren. 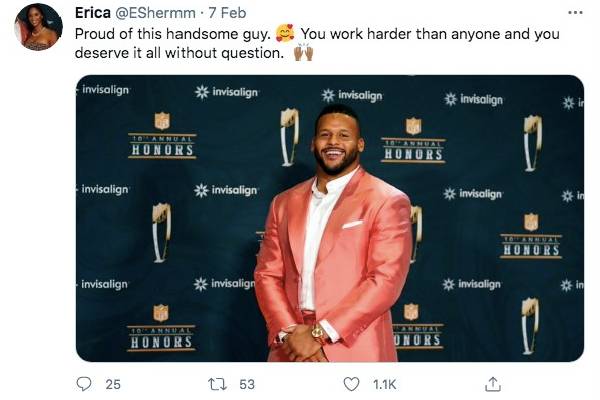 Aaron Donald's to-be-wife, Erica Sherman worked as a manager for community affairs and player involvement for the Los Angeles Rams. It is rumored that the duo met at some point while working under the same organization. She has shown her love and support for the athlete in many of her posts on her social accounts like Twitter. She is currently employed as Vice President for Athlete partnerships at game1.

Aaron Donald's children are the apple of his eyes. The six-foot-tall father-of-two loves both of his children dearly and likes to call his daughter "my little princess." Like most parents, Aaron has pampered his children with expensive toys, which is a small price for him to pay to keep himself and his family happy. His girlfriend Erica and his kids are his biggest fans who always support him in every game. With such a father figure as an idol, we may get a chance to see one of the footballer's children follow in their father's footsteps in the world of sports in the future.