Carmelo Anthony, also called Carmelo Kyam Anthony, is a professional basketball player currently playing in the National Basketball Association (NBA). He has been an NBA All-Star team member ten times since the start of his career. Moreover, the athlete has also played in the Olympics as a part of the US national team four times. Anthony is best known for his offensive tactics, which have helped him score many times.

The professional player has achieved massive success throughout his sports career. Alongside his career, Carmelo's personal life has also been the interest of his fans. Carmelo Anthony is known for his marital relationship with Alani Nicole Vazquez, aka La La Anthony. Furthermore, Carmelo Anthony's wife La La Anthony is an actress and a television personality. Many people admire the pair's chemistry.

Today let's go through Carmelo Anthony's biography and get to know him better.

The NBA star was born on May 29, 1984, in Brooklyn, New York. He is of mixed heritage. Carmelo Anthony's father, Carmelo Iriarte, is a Puerto Rican with Spanish, African, and Venezuelan ancestry whereas, his mother, Mary Anthony, is an African-American. In addition, he also has two older brothers Wilford Anthony and Robert Anthony, and a late sister Michelle Anthony. He also has a half-sister named Daphne Anthony.

Unfortunately, the basketball player's father, Carmelo Iriarte, had an untimely demise due to cancer when he was only two years old. This incident led him to have a difficult upbringing.

Carmelo Anthony got joined Towson Catholic High School after moving to Baltimore. His basketball career started during his time at the high school. Moreover, Carmelo became one of the best players in Baltimore and was declared Baltimore's County Player of the Year. He finished his senior year at Oak Hill Academy.

Carmelo Anthony was admitted to Syracuse University at the age of nineteen. However, the athlete didn't complete his college education and left the university to pursue a sports career in NBA.

Carmelo Anthony became serious about basketball after moving to Baltimore. He witnessed the drug dealings and violence in his neighborhood, which increased his desire to have a better life. That's when young Carmelo started playing basketball to get away from the miserable reality surrounding him. His constant practice led him to hone his skills.

The sportsman attended Oak Hill Academy his senior year after talking to Steve Smith, head coach of the school's basketball team. As a result, Carmelo was selected as a leader for AAU Baltimore Select Team for the Final Four of the Addidas Big Time Tournament in Las Vegas. He performed very well, with average scores of 25.2 points. In addition, Carmelo Anthony also won the silver medal as the East Team's player in USA Basketball Youth Development Festival. He also became friends with Los Angeles Lakers player LeBron James during high school.

The athlete paved his way to the NBA in his college days. He played one season during 2002-2003, where he scored 22.2 points and ten rebounds. Moreover, Anthony guided the Syracuse University team to first place in NCAA Tournament in 2003. He also earned the title of Most Outstanding Player. In addition, the sports athlete was also named Second-Team All-American by the Associated Press. Afterward, he quit the Syracuse University and was declared eligible for the 2003 NBA draft.

After being chosen in the 2003 NBA draft, Carmen Anthony made his NBA debut alongside Denver Nuggets on October 29, 2003. He signed a four-year contract with them for $15,108,241. In his debut game, Nuggets registered victory over the San Antonio Spurs. Furthermore, Anthony participated in a rookie game in 2004 and scored 41 points against Seattle SuperSonics. Thus, he became the second-youngest player to achieve at least 40 points in a game in NBA history.

Carmelo Anthony signed a five-year contract with Denver Nuggets from 2007 to 2011 for $78,899,560 and played in all seasons. Moreover, the athlete also helped the Denver Nuggets to finish a basketball season with 50 wins for the first time since their establishment. Besides that, Carmelo was also involved in the Knicks-Nuggets brawl. He was also suspended for fifteen games after punching Knicks player Mardy Collins. 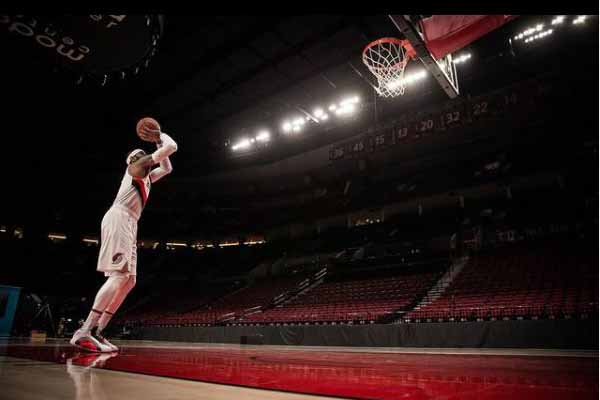 The athlete signed a three-year contract with New York Knicks in 2011 after departing from Denver Nuggets. He was paid $64,166,861 for his performance. Moreover, the player scored 27 points and had ten rebounds in his first match against the Milwaukee Bucks. Sadly, Carmelo Anthony's first season with New York Knicks was not favorable, with him being injured and missing eleven games. But, the player made his comeback in the upcoming season by scoring 34 points and winning against the Phoenix Suns.

The handsome athlete signed a five-year contract with New York Knicks for $124,064,681 in 2014. During his time with the Knicks, Carmelo Anthony helped the team win against Milwaukee Bucks, Charlotte Bobcats, Miami Heat, Atlanta Hawks, and Charlotte Hornets.

After playing for the New York Knicks for seven years, Carmelo Anthony signed one year contract with Oklahoma City Thunder and Houston Rockets consecutively between 2017 and 2019. He was paid $2.4 million for the latter agreement. After that, the spots personality signed a year contract with Portland Trail Blazers on November 19, 2019, for $2,159,029. Sadly, Carmelo's first match against New Orleans Pelicans was a loss. However, the former Knicks player scored a win against Chicago Bulls, scoring a season-high 25 points with eight rebounds.

The athlete resigned his contract with the Portland Trail Blazers for $2,564,753. Furthermore, Carmelo Anthony made a new high score of 28 points in a victory over the Toronto Raptors. He has also led the Blazers to win against Charlotte Hornets, Detroit Pistons, and Minnesota Timberwolves. In addition, Carmelo Anthony ranks 10th on the NBA All-Time Career Scoring list. He has re-signed a year contract with the Portland Trail Blazers.

Competing In The Olympics

Alongside playing with his regular team, Carmelo Anthony was also selected for US National Team to compete in the Olympics. He first participated in the Olympics of 2004 as a member of the US team. Carmelo was also joined by Allen Iverson, Stephon Marbury, and Tim Duncan. Moreover, the athlete won a bronze medal and scored 2.4 points and 1.6 rebounds on average.

Carmelo Anthony Net Worth And Earnings

The all-around basketball player had many ups and downs in his sports career. However, he never gave up and improved his performance each time. As a result, Carmelo has amassed a fortune from his job. Carmelo Anthony's net worth mainly comprises his earnings from his pro basketball career. Moreover, his salary also comes from endorsements and brand deals.

The athletes' salary from his teams over the years are tabulated below:

According to Celebrity Net Worth, Carmelo Kyam Anthony has a net worth of $160 million. This estimation includes his salary and payment from endorsements. The source mentioned above also referenced Carmelo Anthony's income from NBA to be $260 million in 2020. Furthermore, he was ranked 42nd in The World's Highest-Paid Athlete 2019 by Forbes.

The athlete also has a YouTube channel where he posts many contents. He also hosts an interview session, What's In Your Glass, where he invites important figures to talk. In addition, Carmelo also posts a weekly series which gives the glimpses of the athletes daily life.

According to Social Blade, Carmelo Anthony has $3- $48 monthly earnings and $36- $581 yearly. With 139K subscribers and more than seven million total views, the sportsman benefits from his YouTube channel.

Carmelo Anthony is also focused on helping others rather than just earning money for himself. He is a philanthropist and has helped many people and causes. As such, Carmelo Anthony has founded The Carmelo Anthony Foundation. This foundation helps to provide educational and recreational opportunities for underprivileged children. It also launches programs and raises donations to empower and inspire the less fortunate. 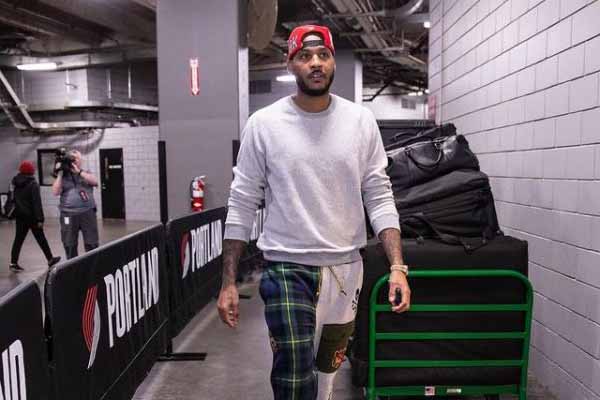 The athlete had also donated $35,000 to the victims of the tsunami of 2004. Moreover, he provided funds for 42 schools in West Baltimore. Carmelo Anthony's efforts of supporting others are remarkable.

The pro basketball champion is also known for his relationship with the famous television personality La La Anthony. The pair got engaged in December 2004 after dating for some time. Carmelo Anthony's then-fiancee La La Anthony gave birth to Kiyan Carmelo Anthony on March 7, 2007. The duo tied the knot in 2010. Moreover, the wedding ceremony was aired on a reality show, La La's Full Court Wedding. 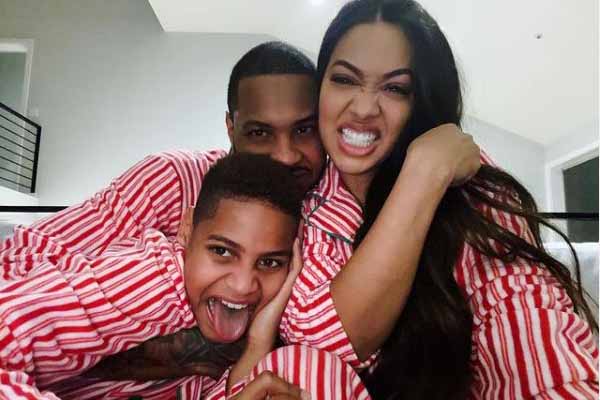 The married life of Carmelo Anthony and La La Anthony was full of alleged betrayals and miscommunication. The pair separated in 2017 for some time due to the rumor of Carmelo's cheating. However, the couple reconnected and got back together in late 2018. After the reunion, Carmelo Anthony worked harder to improve himself and save his marriage.

The six-foot-tall athlete had previously denied cheating speculations back in 2019. He also posted his gratitude for his wife La La Anthony on mother's day of 2021. So, the news of their divorce came as a surprise for many people. Moreover, Carmelo Anthony's wife La La Anthony has not disclosed the reasons behind the filing for divorce.

Let's hope Carmelo Anthony will sort out his problems quickly.