Since his NHL debut in the 2013-14 season, Johnny Gaudreau has decorated his resume with numerous prestigious accolades. Photo Source: Johnny's Instagram.

John Michael Gaudreau, better known as Johnny Gaudreau, is a professional ice hockey winger in the National Hockey League for the Calgary Flames.

The sports figure first caught the eye of the public when he was drafted 104th overall in the fourth round of the 2011 NHL Entry Draft by the Flames. Following his draft, Johnny won the Hobey Baker Award for best player in the NCAA in 2014, and in his first full NHL season in 2014–15 enlisted to play in the 2015 NHL All-Star Game.

Today let's take a look at Johnny Gaudreau's biography and discover interesting facts about him.

On 13th August 1993, Johnny was born John Michael Gaudreau in Salem, New Jersey. Shortly after his birth, the Gaudreau family moved to Carney's Point, where Johnny spent most of his childhood.

Johnny Gaudreau's parents, Guy Gaudreau and Jane Gaudreau raised him alongside his three siblings. He has two sisters: Kristen Gaudreau and Katie Gaudreau, and one younger brother, Matthew Gaudreau.

Johnny's father, Guy, was a coach at Gloucester Catholic. Hence, young John would often tag along with his father in the arena and watch his father teach ice hockey to other kids. 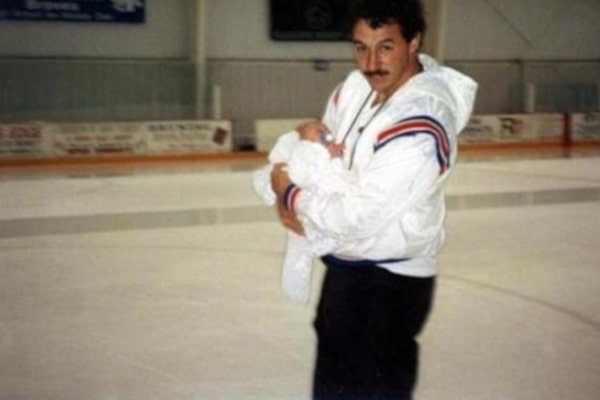 Johnny Gaudreau's father, a long-time hockey coach, encouraged him to play and pursue a career in the sport. Photo Source: Johnny's Instagram.

When little Gaudreau grew up, he learned the fundamentals of hockey from his father and immediately fell in love with the game. Over the years, he improved his skills as an athlete under his father's guidance and expressed his desire to play in the NHL. So, Johnny's dad signed him up for a minor hockey league in Hershey, Pennsylvania.

As for his studies, the Salem-born player attended Gloucester Catholic High School and graduated from Dubuque Senior High School.

After graduating from high school, young John entered the professional ice hockey scene while playing for the Dubuque Fighting Saints in the United States Hockey League (USHL). With his brilliant performance, Gaudreau became part of the 2011 USHL All-Star Game and helped his team lift the cup as the USHL champions.

Even as a teenager, John caught the eye of many industry experts and scouts with his outstanding skills. As such, he was listed on the USHL All-Rookie Team and the All-USHL Second Team. In addition, he was also awarded the title of USHL Rookie of the Year.

The teenage athlete Gaudreau first caught the attention of the media when he was drafted 104th overall in the 2011 NHL Draft Entry by the Calgary Flames. Following his draft, he started his career in the NCAA with the Division I Boston College Eagles.

While playing for Boston College, Johnny won numerous tournaments, including the National Championship, Beanpot Tournament, etc. His excellence and delicate control over the puck led him to become a finalist for the prestigious Hobey Baker Award along with Eric Hartzell and Drew LeBlanc in 2013.

While Johnny couldn't win the award that year, he was named the recipient of the Hobey Baker Award the following year. Jack Eichel of Boston University won the award in 2015.

Before making his NHL debut, John stayed for the season in Boston to play with his younger brother, Matthew Gaudreau.

Gaudreau made his NHL debut in the final game of the 2013-14 season for the Calgary Flames. After a viral shootout move, Gaudreau was chosen for the All-Star Skills Competition Rookie Team.

On 22nd December 2014, he scored his first NHL hat-trick against the Los Angeles Kings. His consistent performance and display of skills inside the rink captivated millions of viewers.

On 10th October 2016, Gaudreau signed a six-year contract with the Calgary Flames valued at $40.5 million. Following his contract extension, the athlete has accomplished numerous milestones.

As of 2021, Johnny has finished nine seasons with the Flames. However, considering his performance, there are many more flourishing seasons to come.

Johnny Gaudreau Net Worth And Earnings

With so many accomplishments under his belt, John has become one of the prime NHL players of his era. Thus, ice hockey enthusiasts worldwide can not help but wonder about all the fortunes he has accumulated over the years.

Johnny Gaudreau's net worth primarily consists of his earnings as an athlete and income from merchandise sales. Let's break down John's enormous assets and discover his various sources of revenue.

Income As A Successful Athlete

Johnny has spent nine seasons with the Calgary Flames, solidifying his position as a winger. Over the years, he has proved to be a valuable asset to the team. As a result, the Flames are willing to invest a hefty sum of money for his presence.

Aforementioned, Gaudreau signed a six-year contract with the Flames in 2016, which was valued at a monstrous $40.5 million. As per the agreement, he was paid an annual salary of $6.25 million, exclusive of signing bonuses and incentives.

Here is the detailed table of John's seasonal earnings as per Spotrac:

Gaudreau will be paid a remuneration of $6,750,000 in 2021-22, with a cap hit of $6,750,000. Moreover, if the Calgary Flames wins the championship in the ongoing season, there is no doubt Johnny will receive a massive bonus which will help increase his wealth.

Aside from his professional career, Johnny earns decent cash from sales of his merchandise online. He has partnered with multiple outlets on the internet and distributes products to different websites. 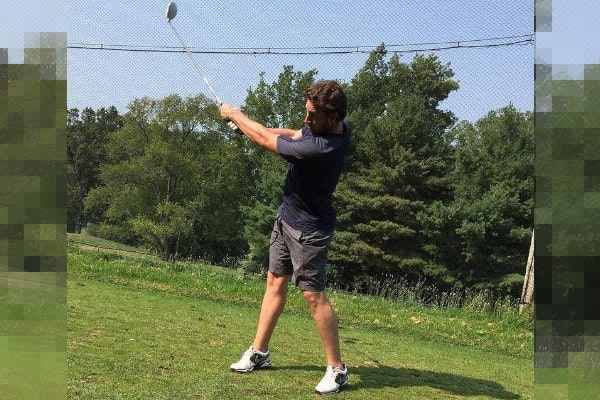 Along with his earnings as a professional hockey player, Johnny Gaudreau's net worth also includes the amount he earns through merchandise sales. Photo Source: Johnny's Instagram.

People can find Gaudreau's merchandise on multiple top-selling websites like Amazon, Fanatics, Walmart, etc. Some of the clothing items in his collection are listed below:

Although he has not disclosed profits from the sales, the Flames' winger must generate decent assets considering his fame and dominance.

Moreover, he trademarked his nickname, Johnny Hockey, in the US and Canada so that people would not abuse it for their marketing gain. And since the nickname has been trademarked, Gaudreau must receive a certain amount when people use it in various items, thus, increasing his earnings.

Furthermore, Johnny Gaudreau's net worth, which might be counted in millions, has helped him enjoy a lavish lifestyle.

Who is Johnny Gaudreau's Girlfriend?

The celebrity athlete, John, has made his name heard far and wide through his prolific career in the NHL. However, although most hockey enthusiasts are well-acquainted with his accomplishments inside the rink, only a few people know about his romantic endeavors and dating partner.

Johnny is infamous for keeping his love life a mystery. A quick glimpse at his social media accounts online may mislead you into thinking that the player might be single. Nonetheless, it is not the case. The Calgary Flames star is dating his long-time girlfriend, Meredith Morris.

Engaged And Soon To Be Married

Gaudreau and his girlfriend are both very protective of their relationship. Consequently, little to no information is available about the couple's affair and past dating experiences. Nevertheless, it has been confirmed that the duo is officially engaged and soon to be married.

According to multiple sources, John proposed to his girlfriend on 29th August 2020. The duo was spotted near the beach, enjoying their time with wine, when the sports figure decided to make his move. 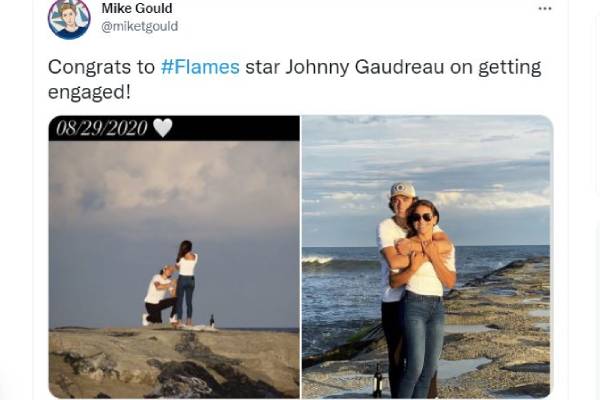 Johnny Gaudreau's girlfriend accepted his marriage proposal, and the couple is well on their way to becoming a husband-wife duo. According to Zola, an online wedding registry, the pair's wedding is registered on 4th September 2021.

We wish them a grand wedding ceremony and hope to get a deeper insight into the couple's married life as they move forward as husband and wife.