Mike Thibault has been working as a coach for over four decades. Image Source: Social Media.

Mike Thibault is a famous veteran professional basketball coach currently serving as the head coach of WNBA's Washington Mystics. Having served as a coach since 1980, Mike has been a familiar name in the league and has led his teams to a couple of championships.

Thibault has also been part of the United States of America Basketball team. With the ever-growing popularity of the WNBA, people are eager to learn more about the coach's personal life. So, in this biography, let's learn how the experienced coach has managed to maintain his reputation by winning the titles he has.

Michael Francis Thibault was born on September 28, 1950, to American parents Frank Thibault and Patricia Thibault in Saint Paul, Minnesota. Unfortunately, Mike Thibault's mom passed away in June 2005 at the age of 78 in California, after a long illness, while his dad died at 92 in June 2017. His old man was a retired school teacher and a board game inventor.

Along with him, Mike Thibault's parents went through a depressing life as a major illness took some of their family members away. He lost five siblings from Cystic Fibrosis (CF) disease over the years, which must have taken quite a toll on him. The coach often mentioned that he does not remember a time when CF was not a part of his life.

Thibault the oldest of nine children had a real and natural sense of responsibility to help his parents take care of his siblings Larry Thibault, Barbara Privitera, and Jane Van Dyke. He lost four sisters and a brother to that disease. The first casualty was his second-born sister who died at the age of five and he was only seven at that time. It was the start of something disastrous as he kept on losing people. 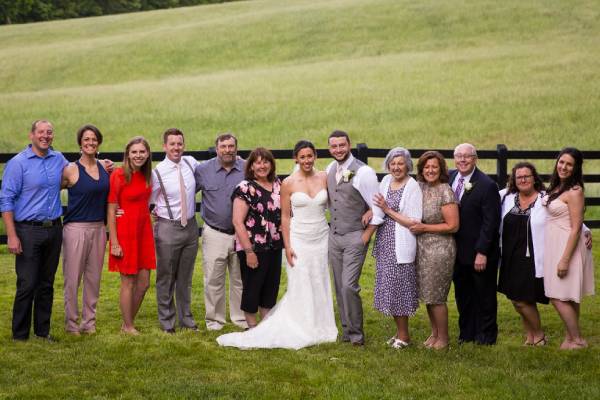 Mike Thibault went through a difficult childhood as he lost four brothers and a sister to a deadly disease. Image Source: Nanci Dean Thibault Facebook.

As the medical field was not as advanced in the 50s and 60s, it was unknown that CF could be a generational disease. It was a very difficult time for Thibault and his parents and he was devastated watching his siblings get sick a lot. He learned to accept that his parents would not be able to watch him play baseball or basketball in school and college as they would be taking care of his brothers and sisters. Moreover, Mike graduated from Saint Martin's University in 1979.

What Is He Famous For?

The talented sports personality is famous for being the winningest coach in the WNBA, who has managed to win 379 games in his career as of August 2022. He joined the NBA's Los Angeles Lakers to work as a scout for the team. He then was promoted to the Director of Scouting (DoS) and an assistant coach. During Thibault's tenure, the Lakers won the League Championship twice. He left the LA team in 1982 to join Chicago Bulls, where he served as an assistant and DoS, drafting players like Michael Jordan, Charles Oakley, and John Paxson, among others. Chicago won six League Championships between 1991 and 1999.

Thibault did not stop at just that as he was appointed as the United States national team coach for the 1993 FIBA World Championship qualifying tournament. He led the team to a gold medal that year while winning a silver in the 1995 Pan American Games. Upon returning to the NBA in 1997-98, he served as a scout and assistant coach for Atlanta Hawks, New York Nicks, and Seattle SuperSonics through 2003. He finally joined the WNBA with Connecticut Sun in 2003 replacing Dee Brown.

Mike Thibault Net Worth And Career

Having started coaching in the 80s, Thibault has garnered a lot of experience in the field of coaching. With over four decades of active participation, he certainly has amassed a considerable sum of money. Hence, Mike Thibault's net worth must be a notable sum, considering he has worked as a scout and a coach.

In 1988, the famous coach left the NBA for the World Basketball League and served two seasons as the head coach and general manager for Calgary 88's. Additionally, he won the league's Coach of the Year award in the same year. Then, from 1989 to 1997, the American coach served as a general manager and head coach of the Omaha Racers of the Continental Basketball Association. Thibault led his team to the league playoffs each season and claimed the 1993 championship as well.

Furthermore, Mike led the Sun to the Eastern Conference finals in 2006. Upon doing that, he won the WNBA Coach of the Year award twice with the team in 2006 and 2008. On December 18, 2012, Thibault was appointed as the head coach and general manager of the Washington Mystics. He took the team to great heights qualifying them for the playoffs. He also helped the team win the WNBA Championship in 2019 and won the Coach of the Year award for the third time in 2013. He now competes with the likes of Noelle Quinn and Sandy Brondello.

Here are some of the teams Mike has coached so far:

Also, in November 2021, the Mystics announced that the coach signed a multi-year contract extension, but did not specify the amount. However, an average salary of a basketball head coach is $65,962 a year. Similarly, the Las Vegas Aces head coach Becky Hammon earns $1 million/year, so, Thibault's salary must be significant as well. Hence, Mike Thibault's net worth must be massive.

His Wife Was An Athlete In High School

The Washington Mystics coach has certainly enjoyed a stellar career, but his marriage life is what he relishes more. Mike is married to his beautiful spouse Nanci Dean Thibault, who was an athlete in her high school years. Mike Thibault's wife is the only one in her family who has not pursued a career in basketball.

Mike Thibault's spouse is active on Facebook and her hometown is Eatonville, Washington. Mike says his wife is the lone wolf of the family and must have had a hard time raising their kids when he was away from his matches. The pair has been a fierce supporter of the Cystic Fibrosis Foundation. 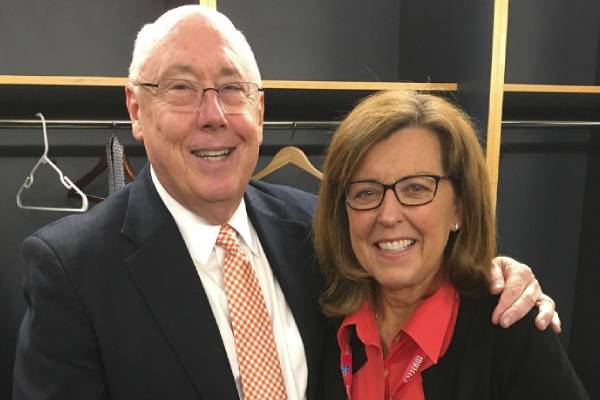 The coach expressed his relief as his kids are healthy and are not a carrier of CF disease. Since it takes both parents' genes to have a defective CF gene, the family is not concerned about the history repeating. However, they are certainly aware of the devastation it causes.

His Children Are Into Basketball

Mike and Nanci have welcomed two children, a son, and a daughter to their small happy family. Mike Thibault's first child, Eric Thibault, was born in 1987, while their daughter came into this world in 1991. As their father, both of them are totally engraved in the basketball world.

Mike Thibault's daughter, Carly Thibault-DuDonis, is the head coach of the Fairfield University women's basketball team. Eric, however, is a Washington Mystics coaching staff member. Carly is married to Blake DuDonis, who is the women's basketball head coach at the University of Wisconsin-River Falls., and on the other hand, Eric is married to Andreya Cracco Thibault. 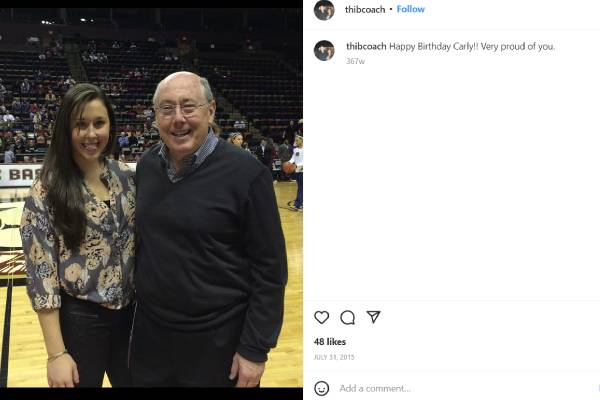 Mike Thibault's daughter has followed in his footsteps and is involved in the basketball coaching world. Image Source: Mike Thibault Instagram.

Mike Thibault's son, Eric, is in line to be the next Mystics' head coach when he decides to retire. According to the Washington Times, he was offered a head coaching job from another WNBA team, but he declined the offer. He might want to follow in his father's footsteps and coach Mystics.

The head coach is considered an icon in WNBA with all his success and achievement. Mike seems to have been leading a happy and healthy life with his family, so let's hope he can continue to do that. Also, let's be hopeful that the deadly disease does not affect anyone in his family.