Sandra Anne Brondello, shortly Sandy Brondello, is a renowned personality in the Women's National Basketball Association. The veteran coach presently serves as the head coach of New York Liberty. In addition to coaching, she also had a successful playing career. Sandy belongs to the generation of players who took women's basketball in Australia to heights of excellence.

While the sportswoman has gained massive recognition for her contributions on the basketball court, people are eager to learn more about her life behind it. In this short biography, we will provide all the necessary points regarding Brondello's basketball journey and her successful professional career.

Sandy was born on August 20, 1968, in Mackay, Queensland, Australia. Her parents, Dino Brondello and Estelle Brondello, were sugar cane farmers. Furthermore, she was just nine when she realized her dreams of becoming a basketball player. So, Sandy Brondello's father built her a grass court in the backyard of their house. Her dad and mom have watched and supported her sports career since its beginning.

The Australian native is a graduate of the University of Western Sydney, Milperra, from where she earned a teaching degree. She also attended the Australian Institute of Sports from 1986 to 1987.

Sandy Brondello Net Worth And Career

Brondello's professional playing career began in Australia's Women's National Basketball League. During her tenure of 18 years, she won two silver medals in the 2000 and 2004 Olympics. The four-time Olympian was also named the Australian International Player of the Year in 1992. Moreover, she is regarded as one of Australia's all-time best shooting guards.

The former athlete is now leading a successful coaching career in the WNBA. After finishing her playing career, she smoothly transitioned to the coaching world. Hence, Sandy Brondello's net worth must have also increased, alongside her new beginning.

The 5' 7'' tall sportswoman competed for national and international teams like Brisbane Blazers and BTV Wuppertal. In 1998, Sandy took up an offer to play in the WNBA for the Detroit Shock and was selected to play in the first-ever WNBA All-Star Game the following year. She was active as an athlete from 1998 to 2003.

Let's look at Sandy Brondello's per-game stats in the WNBA.

From the table above, one can estimate that the Queensland native has had an impressive playing career. Unfortunately, due to Olympic commitments, the former shooting guard had to sit out the WNBA games in 2000 and 2004. Sandy was a WNBA all-star, Australian League MVP, and twice European Cup MVP during her seventeen-year career. She retired after her final tournament in the 2004 Athen Olympics.

The New York Liberty officially announced Brondello as their head coach on January 7, 2022. Before that, she served as Phoenix Mercury's head coach from 2014 to 2021. Talking about her coaching debut, she stepped into coaching as the assistant coach of the San Antonio Silver Stars in 2005.

The Mackay native is also the head coach of Australian Women's Basketball since 2020. While WNBA coach Becky Hammon earns $1 million a year, Sandy's salary although might not amount as much, but her contract with Liberty must also pay her well. Hence, Sandy Brondello's net worth must be significant.

Likewise, James Wade is another WNBA head coach who excels in his career.

Married To A Longtime Coach

The head coach has been blissfully married to Olaf Lange since 2005. Sandy Brondello's husband is an assistant coach at New York Liberty and Australian Opals. In addition, he has over a decade of experience coaching high-profile European basketball. Mr. Lange coached WNBA players such as Chamique Holdsclaw, Ruth Riley, Katie Feenstra, Nikki McCray, Murriel Page, and Michelle Timms.

Sandy Brondello's spouse is a German citizen, and the couple first met in Germany when Sandy was playing, and Lange was an assistant for BTV Wuppertal in the mid-1990s. After getting acquainted, the pair started dating and have been together since then. The coaching duo has been happily married for almost two decades now. Over the years, they have worked together and also competed against each other. 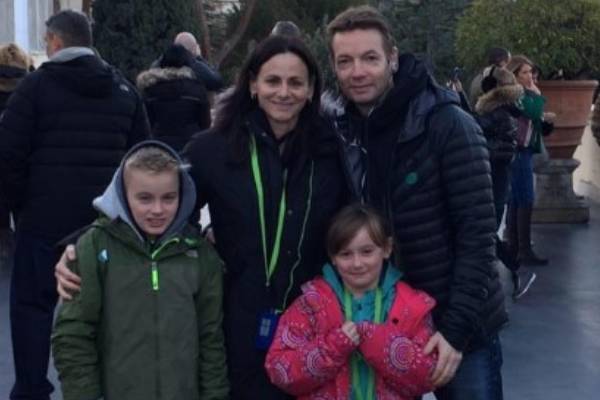 Also, the Western Sydney alumna is a coaching consultant for her hubby's Kaizen Basketball Academy, LLC. Nonetheless, the lovebirds' shared passion for basketball might be one of the reasons behind their long-lasting marriage.

Are Her Kids Following In Her Footsteps?

The sports personality is not only an excellent coaching figure but also a doting mother. She shares two lovely children with her husband. Sandy Brondello's son, Brody Lange, was born in February 2007. And her little girl, Jayda Lange, arrived three years later in 2010.

Sandy Brondello's children are amiable and have adequate communication skills. While the kids were mostly homeschooled, Brody went to a children's sports school in Ekaterinburg. There, he was guided by three different basketball coaches. On the other hand, Jayda also started playing basketball in 2017.

Considering their parents' sports background, will we see Brody and Jayda following in their footsteps? Sandy and Olaf frequently travel for work, and the Lange kids have experienced traveling from a young age. They have already met many players and seen many cities and countries.

Overall, Sandy Brondello is a successful coach, wife, and doting mother. Yet, despite all these responsibilities and demanding work schedules, she is excelling in all aspects of her life. The Liberty head coach is a career woman who loves being a mom to her kids. We wish her more prosperity in her future endeavors.