Mike Matheny is not a new name in the baseball world. He served as a catcher for thirteen seasons for various MLB teams. Moreover, the former baseball pro led his clubs to numerous victories in his playing career.

The athlete's momentum didn't only stop after his retirement as he continued to coach different teams. He became a manager for St. Louis Cardinals after his retirement. Furthermore, the sportsman became the first MLB manager to guide the team to playoffs for four seasons consecutively. As a result, he was voted for the National League Manager of the Year from 2012 to 2015.

So, let's know more about this legendary baseball star in this biography.

Likewise, Matheny's mother, Judy Matheny, was a Baptist missionary association staff. Although both parents didn't have a baseball background, they always believed in their son's passion.

Mike also has three brothers with whom he shares a close bond. However, none of them seem to be involved in baseball like him. 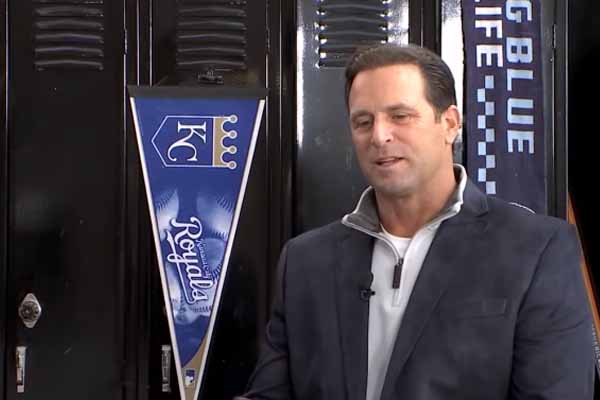 Mike Matheny's family didn't have a baseball background but supported his career from the beginning. Photo Source: Social Media.

The athlete was passionate about sports from a young age. As such, he captained the baseball and football teams in Reynoldsburg High School. Moreover, after completing high school, the Toronto Blue Jays drafted him in 1988. They offered him a special deal reserved for second-round picks.

However, Matheny was sure he wasn't ready to be a pro. So, he instead accepted a scholarship from the University of Michigan. Furthermore, the young guy co-captained the Wolverines Baseball Team in college.

Eventually, he graduated with a degree in Sports Management and Communications with a concentration in Spanish.

After graduation, the Milwaukee Brewers picked Mike in the 1991 Major League Baseball Draft. He played three years in the minor league before making his MLB debut on April 7, 1994.

The baseballer was very focused and exuded hardiness in the field. For instance, he took a hit in the face during a match against the Pittsburgh Pirates in the 1998 season. However, he spewed out a mouthful of blood and walked back to the dugout. 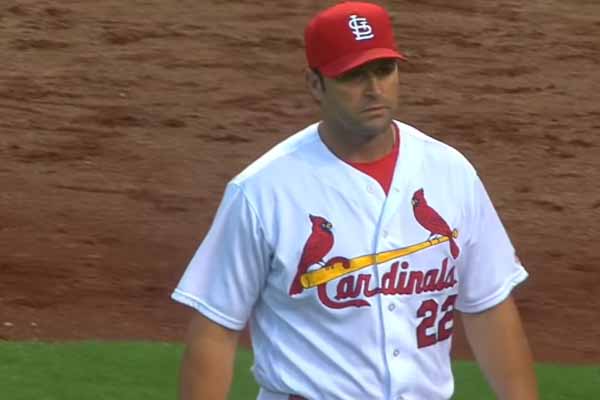 During his playing years, Mike Matheny never allowed injuries to stop him from returning to the game. Photo Source: Social Media.

The athlete signed up with the Toronto Blue Jays on December 23, 1998. He played for a season before joining St. Louis Cardinals in 1999. Moreover, the sportsperson was an excellent defensive catcher and helped the Cardinals to win many competitions. As a result, he obtained four Gold Glove Awards in 2000, 2003, 2004, and 2005.

Matheny's last match was with the San Francisco Giants. While playing for the team in the 2006 season, he took a series of foul hits to his head, leading to a severe concussion. In addition, the baseball pro continued to suffer from post-concussion syndrome. So, he eventually retired on February 1, 2007.

After the unfortunate retirement, the former baseball player returned as Bill DeWitt III's St. Louis Cardinals' special adviser in January 2008. He succeeded the former manager Tony La Russa and became the youngest manager in MLB on November 14, 2011. Another candidate interviewed to replace Russa was Terry Francona, but he wasn't chosen.

The new manager won in his managerial debut against the Miami Marlins in April 2012. However, he also received his first ejection twenty days later in the match against the Chicago Cubs. 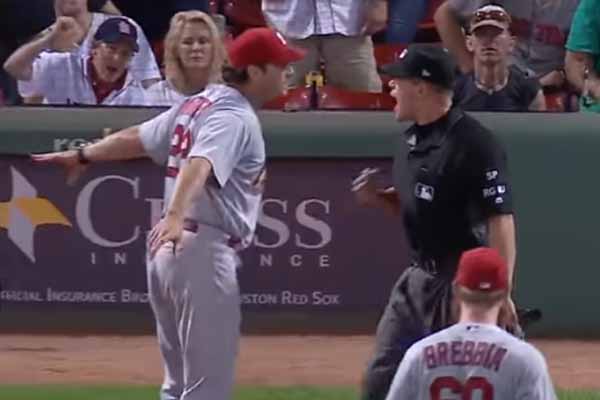 Mike's most notable result was scoring the Cardinals' best record of 97-65 in the 2013 season. As a result, he won the National League Central division title. In addition, he again won the trophy in 2014 and 2015.

Kansas City Royals later hired Matheny after the retirement of former manager Ned Yost on October 31, 2019. He is currently leading the team to the 2021 season.

Mike Matheny Net Worth And Earnings

The sportsperson has time and again proved his worth on the baseball field. As a player, he never gave up and even competed with bruises and injuries. It also made him a no.1 choice for many major league baseball teams.

Alongside fame, Matheny has earned a notable figure from his playing career. His salary during his professional years are tabulated below:

Aside from playing, Mike has also excelled as a manager. Under his guidance, the Cardinals scored numerous victories for several seasons. Moreover, the baseball manager will undoubtedly show his potential while leading the Royals in the upcoming matches. So, his managerial contract must be worth millions of dollars.

The former baseballer has also co-authored a book named The Matheny Manifesto. He and Jerry B. Jenkins have written it to guide parents, coaches, and athletes regarding sports. It is available for $12.99 in Kindle and $15.20 in Hardcover format.

Hence, combining all the sources, Mike Matheny's net worth must be enormous from his baseball career.

Although Mike has been successful in his sports career, the same couldn't be said about his business ventures. He teamed up with pro indoor soccer players Daryl Doran and Brett Phillips to found MPD Partnership in 2005.

The team invested in real estate and made a $2.4 million profit in six months. After that, however, Doran left the partnership, which made the remaining members get an $11.8 million loan from the Business Bank of St. Louis. Due to the financial downfall, they couldn't gain any profit.

As a result, Matheny wound up with over $4 million in debt after losing the legal battle. He had to sell his seventeen-room Wildwood mansion to pay back the money.

Nonetheless, the baseball manager has now paid back all of his debts. As a result, he is financially stable at present.

Who is Mike Matheny's Wife?

The sportsman advanced to new levels in his career due to his hard work and determination. But his progress has also been possible with the constant support of people beside him. And one such person is his partner, Kristin Matheny, aka Kristin Shaiper Matheny.

The pair's first meeting goes back to their university days. Both were student-athletes, with Kristin being a hockey player at the University of Michigan. Moreover, the couple soon began dating and later married in January 1993. 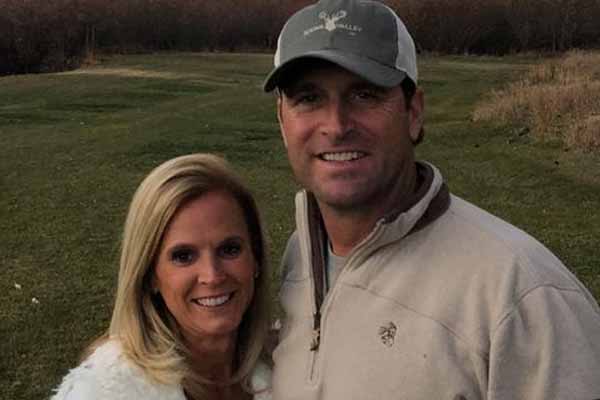 Mike Matheny's wife, Kristin Matheny, is involved in her husband's charity, the Catch-22 charity. She has been with him through his playing career, financial crisis, and managerial career.

The couple often poses together on their social media accounts. They also attend events and baseball games together.

Mike is a proud father of five children. His firstborn, Tate Matheny, currently plays for Boston Red Sox. Moreover, the latter is married to lifestyle YouTuber Margaret Matheny and has a son named Ryker James.

Mike Matheny's daughter, Katie Harris aka Katie Matheny, is currently a Pilates instructor. She is wedded to Tyler Harris and has a baby boy named Jax Harris. 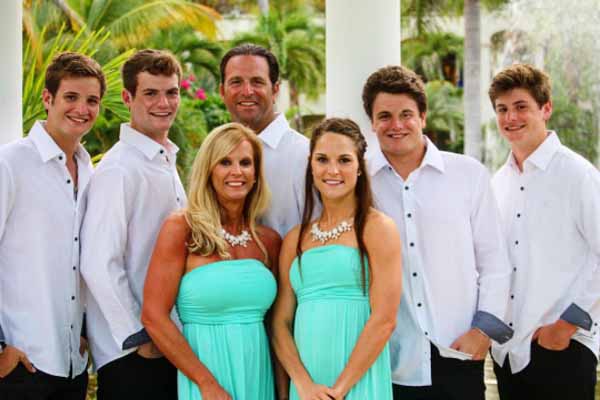 Mike Matheny values his players and focuses on developing strong teamwork. His strategies have earned him many wins over the years. Hopefully, we will see him continue to shine as Kansas City Royals' manager in the future.

Dusty Baker is a baseball legend known for playing for the Atlanta Braves and Los Angeles ...

Although Torey Lovullo grew up as a child of a prominent producer, he has little to no ...