Shohei Ohtani is an MLB player who is known for playing as both hitter and pitcher. Photo Source: Shohei Ohtani's Instagram.

Shohei Ohtani is a well-known baseball player in the sports industry. He has been in the game for nearly a decade. Furthermore, Ohtani has amazed the sports fans with his pitching skills. He can throw a four-seam fastball on an average of 97 miles per hour with overhand skills. In addition, the player is also a left-handed batter known for winning home runs with his batting style.

The sportsperson got more recognition after joining Los Angeles Angels in 2017. He has shown his baseball skills in many matches as a part of the team. Moreover, the athlete has recorded seventy-eight home runs in his MLB career as of July 2021. His athletic talent is indeed phenomenal.

So, let's go through the career and life story of Shohei Ohtani.

The sportsman was born on July 5, 1994, in Oshu, Iwate. He was born into an athletic family, which shaped his perception of a sports career. Shohei Ohtani's father, Toru Ohtani, was a baseball player in Japan's high-quality corporate league. The company also gave rise to the MLB player Junichi Tazawa.

Likewise, Shohei Ohtani's mother, Kayoko Ohtani, is a former badminton player. She has accomplished a successful career in her profession. Moreover, the baseball player used to go to his parents' matches and watch their performance. His yearning to be on the field just like his parents started from a young age. 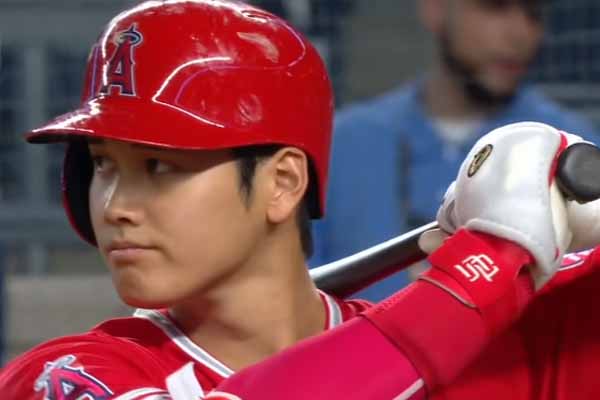 Shohei Ohtani's brother Ryuta Ohtani was also influenced by their father to pursue a career in sports. As a result, he is a baseball player in Japan. In addition, Shohei also has a sister who prefers to stay away from the media. However, she often comes to watch her brother's matches.

The player attended Hanamaki Higashi High School in his hometown. During his school days, the young athlete already started honing his baseball skills. As a result, he participated in the Japanese National High School Baseball Championship at seventeen. Moreover, Ohtani also played in the 2012 18U Baseball World Championship. He made five hits, eight walks, and sixteen strikeouts but his team lost the game.

Aforementioned, Shohei Ohtani received both national and international teams' offers to play baseball. However, despite wanting to become an MLB player, Ohtani decided to hold off his plan and perform in Japan for some time. As such, he signed a deal with Hokkaido Nippon-Ham Fighters in 2013. Moreover, the new player reportedly received a salary of $272K (30 million yen) yearly in his early playing career.

The sportsman made his debut in the team's season-opening game on March 29, 2013. He played as a right fielder for the match. Furthermore, Shohei played as both outfield and pitcher. He is also the first Nippon Pro Baseball rookie to bat 3rd, 4th, and 5th since Takao Kajimoto in 1963. Sadly, the player couldn't score a victory and finished the season with a 3-0 record.

The baseballer improved in the upcoming season of 2014. The pitcher showed off his incredible throwing arm and batting skills. In addition, the sports player made ten home runs in 212 at-bats. He also scored an 11-4 with 2.61 ERA and 179 strikeouts in 155 1/3 innings as a pitcher.

Moreover, Shohei became the first Japanese player to get double digits in both home runs and wins after his match against the Orix Buffaloes in September 2014.

The same year, Shohei Ohtani became a member of the Japanese national team and participated in the Suzuki All-Star Series. After striking out Yasiel Puig, Justin Morneau, and Evan Longoria in the first inning of the final round, the athlete quickly gained international fans. He scored seven innings but unfortunately couldn't snag a win. 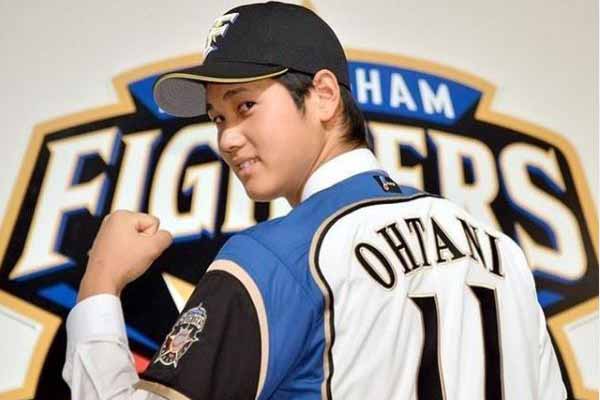 Ohtani's new contract with Hokkaido Nippon-Ham Fighters guaranteed him a salary of $903,245 (100 million yen) in 2015. He was the starter for the 2015 All-Star Game. Unfortunately, he suffered a declination in the match with a 2.24 ERA, 196 strikeouts, and hundred hits at the season's ending. However, the pitcher performed well as a designated hitter by hitting .202/.252/.376.

The sportsperson made a remarkable comeback in the 2016 season, where he hit twenty-two home runs. In addition, he struck out 174 batters in 140 innings and recorded a 1.86 ERA. Moreover, the athlete led Hokkaido Nippon-Ham to the 2016 Japan Series. He hit .375/.412/.625 and helped his team to win the championship. Furthermore, the same year, Shohei Ohtani won the Best Nine Award as a pitcher and hitter and gained the title of Pacific League MVP.

But, sadly, the luck didn't continue for the baseballer in his upcoming season. He had to withdraw from the 2017 World Baseball Classic due to an ankle injury. He also missed a large part of the NPB season. Moreover, during that period, Shohei finally decided to move forward to pursue an MLB career.

Shohei played as the designated hitter on his first match against the Oakland Athletics. After striking out six batters and making six innings, he had his first MLB win on April 1, 2018. Moreover, Ohtani became the first Angels player to make home runs in his first two career games after making a home run on April 3 and 4. In addition, he finished the season by pitching seven innings and striking out twelve.

The baseball player had to leave the match against Boston Red Sox due to an injury on his right middle finger. MLB also put him on the disabled list due to a grade two UCL sprain in his right elbow. However, the former NPB player made his comeback on July 2, 2018, against the Seattle Mariners.

Ohtani participated in the baseball tournament against Houston Astros on September 2, 2018. He made 49 pitches and allowed two runs in the match. As a result, Shohei became the first major league player to hit fifteen home runs and pitch fifty innings in a season since Babe Ruth did in 1919. He also broke the home run record of a Japanese rookie on September 7.

The MLB player's elbow again caused him trouble at the end of the year. He had to go through Tommy John Surgery on October 1, 2018. Still, for his marvelous performance, Shohei Ohtani was named the American League Rookie Of The Year in 2018.

The Los Angeles Angels player had few matches in 2019, but his knee injury made him end the season mid-way. Moreover, Ohtani pitched for the first time since 2018 in the game against Oakland Athletics in July 2020. He finished the season batting .190/.291/.366, seven home runs, and seven stolen bases in 43 games.

Shohei signed a two-year contract with the Los Angeles Angels for $8.5 million in 2021. He appeared on Sunday Night Baseball battling against Chicago White Sox on April 4, 2021. He pitched for 4⅔  innings and struck seven batters. Moreover, the pitcher also batted second and hit a 450-foot home run on the first pitch. 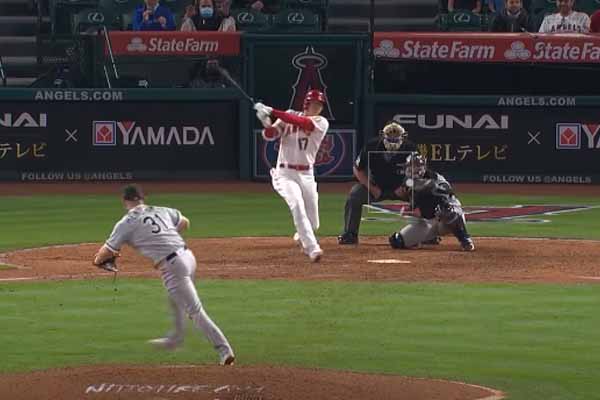 Shohei Ohtani is one of the tough competitors among MLB players with his pitching and batting skills. Photo Source: Social Media.

The baseball star competed against Texas Rangers on April 20, 2021. He pitched for four innings and struck out seven batters. Moreover, on April 26, the batter struck out nine batters and threw five innings on his third round. As a result, he scored the first win of 2021.

Additionally, the Angels player also became the first player to lead the majors in home runs despite entering the game on the mound. It hasn't happened since Babe Ruth took the bank as starting pitcher on June 13, 1921.

Shohei Ohtani once again showed his baseball prowess in the match against Baltimore Orioles on July 2, 2021. He won the game 8-7 with two home runs, three runs, and three RBI. Furthermore, the baseballer scored another victory against the Orioles on July 4 with 6-5 points. His winning streak continued on July 6 against Boston Red Sox with 5-3 points. He struck out four batters and made five hits in seven innings.

The Japanese baseball player has become the first player in Major League history to be selected for All-Star Game as both a hitter and a pitcher. His manager Joe Maddon confirmed the news to the media. Moreover, as one of the best players, Shohei Ohtani's match at the 2021 All-Star Game is highly anticipated. It will begin on July 13, 2021, at Colorado's Coors Field.

Shohei Ohtani Net Worth And Earnings

The Angels player has earned both fame and wealth with his incredible sports skills. He is also called Japanese Babe Ruth by sports critics. Moreover, Shohei Ohtani's net worth mainly comprises his earnings from his sports career. It includes his salary, deal signings, and bonus from his agency. Besides that, Ohtani's income also comes from his endorsements deals.

The MLB player has earned a significant amount throughout his time with the Angels team. Some of his career earnings are listed below:

Looking at the above statistics, there is no doubt that Shohei Ohtani is making a fortune from his sports career.

As one of the prominent players in MLB, Shohei Ohtani has a huge fandom. His skills and physical features are liked by many of his fans. As such, the batter has promoted many products and brands. He earns more than $10 million from endorsement deals alone. Furthermore, Shohei's is the brand name for both Japanese and International companies.

Furthermore, the athlete's deals are estimated to be worth $1 million to $2 million. So, Shohei Ohtani's net worth must be benefitting from his multiple dealings.

The Japanese player is a private person and rarely opens up to the media. He is also not keen on disclosing his personal affairs to the public. Still, the rumors of the player's girlfriend appeared after the picture of Shohei with a girl surfaced in the media.

Moreover, many fans speculated them to be a couple. However, Shohei Ohtani's alleged girlfriend, Kamalani Dung, joked about the rumors on her social media. Ohtani himself hasn't come forward with any dating news so, he is possibly single. 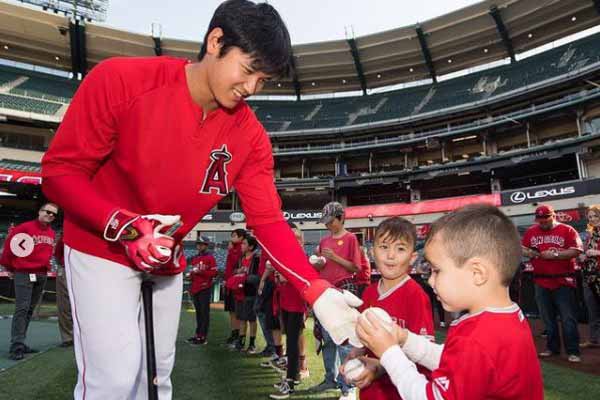 Shohei Ohtani is giving priority to his career rather than dating. Photo Source: Shohei Ohtani's Instagram.

With the upcoming 2021 All-Star Game, the athlete is more focused on his game and training hard than ever. His confidence is boosted by his win against Baltimore Orioles and Boston Red Sox this past week of July 2021. In addition, Shohei had to face medical issues for most of the last year, which cost him many matches.

So, the MLB player is trying to prove his worth in his upcoming tournaments. His hard work and determination are remarkable but let's hope he also finds an amazing partner who will share his happiness.