Born on April 26, 1992, Aaron James Judge was adopted and raised by Patty Judge and Wayne Judge. They were both teachers in Linden, California. The baseball player lived with his brother John Judge, who was also adopted by the Judge family. The baseball player still thanks his mother for raising him to be the man he is today. He loves spending time with his family and invites them over to watch his games.

Aaron went to Linden High School, where he discovered his talent for sports. He was also a wide receiver for the football team and played as a central defender for the basketball team alongside his baseball practice. He was recruited to play football by many colleges but went on to study at the California State University, Fresno, where he played baseball.

Aaron Judge started his career for the Fresno State Bulldogs baseball team in the Western Athletic Conference. He started his professional baseball career with Charleston RiverDogs in the Class A South Atlantic League in 2014. He had been drafted by the New York Yankees of Major League Baseball in 2013 but was out with an injury for the whole season. 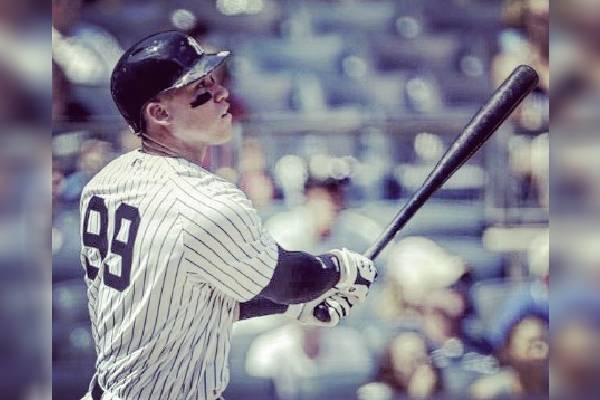 Aaron Judge was signed by the New York Yankees in 2013. Image Source: Instagram/thejudge44.

Judge debuted for Yankees against Tampa Bay Rays on August 13, 2016. Aaron struck a home run in his first bat in Major League Baseball in the same debut game, followed by a second one in his next game. The baseball star went on to hit his first multi-home run against Baltimore Orioles on April 28. One of his home runs held a record for the fastest velocity measured at 119.4 miles per hour (192.2km/hr), which was later broken by his teammate Giancarlo Stanton. On May 28, 2017, Aaron Judge hit his first career grand slam against Oakland Athletics.

The baseball rookie was named American League Rookie of the Month in May. Aaron set another record with a homer with an exit velocity of 121.1 miles per hour (194.9 km/hr). Aaron's home run traveled 495 feet on one of his matches, marking it the longest home run hit of the 2017 season. He also broke Joe DiMaggio's record for the most home runs hit by a Yankee rookie with his 30th home run on July 7 of that season. The baseball player became the first rookie to win the Derby outright.

On August 20, Aaron Judge set another record after striking out in 37 consecutive games, a tie with former professional baseball player Bill Stoneman. The talented baseball player became the first AL rookie and Major League Baseball player to record 100 walks in a single season. He listed himself into the Yankees hall of fame with Babe Ruth, Lou Gehrig, Joe DiMaggio, and Mickey Mantle after 40 home runs before the age of 25. Here are Aaron Judge's stats alongside their timelines.

According to various sources, Aaron Judge's net worth is estimated to be $10 million. The professional baseball player is an outfielder for the New York Yankees in Major league Baseball. He signed a contract worth $1.8 million with the New York Yankees in 2013. The baseball star has also signed endorsement deals with popular brands like Under Armor, Adidas, Pepsi, Lays, and many others. 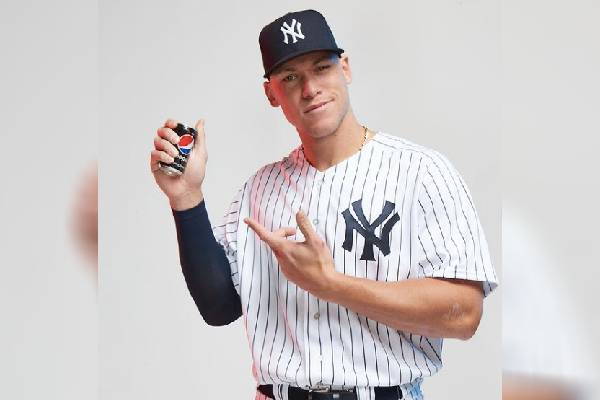 Aaron Judge has signed endorsement deals with Pepsi and Adidas which helps increase his net worth. Image source: Instagram/thejudge44.

The star is sure to earn significant amounts of money from his deals. Here are Aaron Judges estimated career earnings, according to spotrac.

In 2021, Aaron James Judge signed a $10,175,000 contract for one year with the New York Yankees. This will surely increase Aaron Judge's net worth in the coming years.

David Matranga is the vice president of a recruitment agency called PSI Sports Management that represents Aaron Judge and many other players for the Major League Baseball. The agent handles all the deals with the clubs and also associated endorsement for the player.

David was also a former baseball player but had a short career. He had one hit, one home run, and one RBI in his stats. He is also an agent for names like Kolten Wong and Scott Kingery.

Aaron Judge is currently in an on-again-off-again relationship with his long-term girlfriend, Samantha Bracksieck. The couple met during their college days and has been dating ever since. Like many other relationships, the duo has faced difficulties and even broke up in 2016. However, Aaron and Samantha are rumored to be together after they were spotted together at the Fanatics Super Bowl party and LegaCCy Gala in 2019. Aaron Judge and his girlfriend, Samantha Bracksieck, are in no hurry to get married yet and do not have any children.

After Aaron and Samantha broke up in 2016, the baseball star dated Jen Flaum, a university graduate. They ended their relationship after details about the duos hookup was leaked to the media a few months later.