Top 5 Richest Polo Players Alongside Their Net Worth

Polo is the sport that has been seen as the most expensive sport for rich people to play. Therefore, Polo Players would undoubtedly be considered the richest players too. Yes, the sport is expensive considering the cost of trained horses, their upkeep and maintenance, equipment, mallets, clothing, horse trailer, transportation fees, club fees, and other costs. Just taking care and training a horse could cost thousands of dollars, generally from $5000 to $200,000 depending upon the training required and other associated costs. So, one can assume top polo players playing this sport with good ranks must be wealthy.

However, this sport is not reserved just for the wealthy. It has slowly become affordable and accessible to the general public who wants to play and can afford to bear basic expenses. Looking at just expenses is not enough for Polo Sport.

It is hard to play as it requires excellent horsemanship skills, good strategy, and teamwork. Polo is a game that is played on a large grass field with two teams of four players. Each team player rides horses using long-handled mallets to hit a ball across the field.

Knowing all this brings great respect to the polo players in the world as it is in fact, hard to play and requires a lot of training not just of sportsperson but horses too. And what the polo players earn, most of it needs to be reinvested in training, horses, and more. Popular in Argentina, Polo is now famous in a lot of countries in the world, and so are polo players. Among all, here is the list of the top 5 richest best polo players. This is based on research and assumption.

Per the World PoloTour ranking, Pablo Pieres is in third place with 998 points. He is doing his best and climbing to the top. Professional Polo Player Pablo Pieres is one of the best and rich Polo players.

Sibling to another professional player Nicholas, and cousins to famous Facundo Pieres and Gonzalo Pieres Jr., Pablo Pieres is doing great in his Polo Playing profession. A 10 goal Polo Player is said to be earning moe than $1.5 million per year. With Pablo climbing steps even ahead his own brother, it shows that Pablo Pieres net worth is around $5 million.

Pablo Pieres also is seen playing and  participating in events of Ellerstina, the leading and luxurious polo team. You can know about the team, in fact the polo empire soon below. Meanwhile, let's see what Pablo has to share about the club, the estate and players riding Mercedes Benz, and playing Polo in the team.

Gonzalo also appeared in commercials. For instance he was featured in Rolex commercial.

Gonzalo Pieres Jr net worth is astounding not just by the prize money and income he had earned as a polo player but also from the share of his team created by his father. Ellerstina Polo Team, currently Johor Ellerstina, is a polo team founded by Gonzalo Pieres and Australian businessman, and millionaire magnate late Kerry Packer, in 1992.

The polo estate extended to nine polo fields. In 2015, two were later converted into 32- acre golf courses. Ellerstina is the leading high handicap and the best team in Argentine Polo. The team has won the Argentine Polo Triple Crown twice, in 1994 and 2010.

An outstanding player, a team, club, and estate to share with family, Gonzalo, along with his brothers, recently signed an agreement with the Jeep brand, making Jeep the official vehicle of the Ellerstina Polo Team. The polo players will drive the Jeep Grand Cherokee SRT 6.4L V8 HEMI for the duration of the agreement, which starts from $72,865.

The Pieres family, if put together, will have a greater net worth than the players alone.

Facundo Pieres net worth might be more than what we assume because Pieres was only 18 when he was promoted to handicap 10. He became the number 1 player as he won eight titles in the single year of 2013. He won the British Open, US Open, and Queens cup, Hurlingham Open Final, Sotogrande Gold, and Silver Cup, accompanied by USPA Piaget Gold Cup. Pieres has won many tournaments in his career, earning a significant amount of prize money.

Facundo’s Pilot also won $1 million after winning sixteen games in the 2019 US Open.

An average income of 10-goal player is more than $1.5 million a year. Facundo Pieres net worth also might include the property, business created and grown by his father Gonzalo Pieres Sr.

Maggie Steffens, a renowed water polo player, is another player with astounding net worth worth reading.

Adolfo Cambiasso is known as Messi of Polo. Cambiasso is the world's finest and best polo player. Highest possible handicap of 10 goals, whether in Argentina, the USA, or the U.K., Cambiasso is a true legend. Teleperformance reports that Cambiaso has won 164 titles as of 2022.

Till 2020, Cambiasso was known to have around 1000 horses on his extensive farms. With a horse costing around $50,000 on average, we could estimate Cambiasso to have 50 million dollars worth of horses. However, since horse breeding, upkeep and training require almost 33% of the investment, and not all horses would be sold, but some are used for playing, we can consider from horse breeding and auction alone, Adolfo might be making around 300-400 thousand dollars a year.

Along with the prize money earned from winning, Adolfo Cambiasso net worth comes from pioneering the horse cloning business. When one of his best polo ponies the world-famous Aiken Cura, got seriously injured during the final of the 2006 Argentine Open, and euthanized in January 2007, at Cambiasso's request, live skin cells were harvested in the event, and cloning became possible.

When enthusiast Texan Alan Meeker of Crestview Genetics began cloning, it wasn't popular then. But when Meeker teamed up with Cambiaso, along with biologist Dr. Adrian Mutto and Argentine tycoon Ernesto Gutiérrez, Adolfo proceeded to clone his favorite 17-year-old mare Cuartetera multiple times. These are the clones he rode to win the 2017 Argentine Open. There might be more than 45 clones now.

A clone of his horse Cuartetera sold at whooping price of $800,000 at an auction. It was one of the most expensive horse sales in polo history. This horse was kept by contract within the partnership. Now only their foals and not the clones are sold.

To make the embryo, it is $4,000 for a mare of a stallion. The embryos from a very famous mare would range from $40,000 to $100,000. A two to three-year-old baby might cost 180 or even 200 thousand dollars. We can imagine owning farms, horses, houses, businesses, and prize money from team. Adolfo Cambiasso's net worth is estimated at around $20-25 million.

Nacho Figueras, the most famous, handsome, richest polo player in the world, is literally the face and brand of Polo. Celebrity net worth states Figueras's net worth to be $30 million. However, looking at his earning as polo player, model, endorsements; his investments in breeding ranch, hundreds of horses, house, luxury condo, involvement in different luxury companies, launching and globally expanding own fragrance line and more, we can say that Nacho Figueras's net worth is around $50 million.

Starting to play at eight, Nacho became a professional polo player at 17. He moved to Bridgehampton, New York, to join the White Birch team. Nacho not only started earning money and fame from playing Polo but also from modeling after he was introduced to Calvin Klein's wife, Kelly, at a party in the year 2000. With a fresh start in modeling, Nacho Figueras began modeling and became a brand for Ralph Lauren.

Highest ranked polo player, Nacho Figueras, started modeling for the brand Ralph Lauren's clothing, fragrances and merchandise. Nacho's signature Ralph Lauren "#2" Polo shirt is very famous and is a billion-dollar brand. So, what could be Nacho Figueras net worth from modeling alone? Around $2-3 million dollars.

Close friend to Prince Harry, Figueras owns more than 300 horses. A well-trained horse, or a pony may cost an average of $50,000. That means Nacho has more than 15 million dollars worth of horses on his land. However, we can't ignore that raising and training horses require their expenses. Nacho carries out auction of 60 to 80 horses in April every year. Figueras acquired land near Buenos Aires for his horses' stables in 2005 and started construction in 2013. He moved the horses after three years on a great ranch.

He owns over 30 acres of land worth almost $100,000 and lives in a house near his ranch. Married to his wife, Delfina, a former model herself, the couple lives in the beautiful house with their four children. Nacho, 45, is not thinking of settling with this much any sooner.

In 2013, Figueras also launched the Figueras Design Group, a global design consultancy firm headquartered in Buenos Aires. Nacho has many projects going via the group, like designing significant parts of a 20,000-acre development in Napa Valley, Guenoc Valley, with an equestrian club, polo fields, clubhouse, a polo club, a pony camp, golf course, and winery. AMAALA is another project, an ultra-luxury destination on Saudi Arabia's Red Sea Coast. Nacho Figueras was also named an ambassador and advisory board member for the project. Thus, Nacho might earn a substantial amount of money and build a network via FDG.

In 2019, Nacho Figueras collaborated with master perfumer Carlos Benaim to create the fragrances named after the polo destinations of Buenos Aires, Aspen, Palm Beach, Windsor, Dubai, England, and Jaipur. The horseshoe design in various colors shows the distinct brand 'Ignacio Figueras Collection,' the six-scent series that went on sale on December 11, 2019, ranging from $235-$275 per bottle. In addition, he is preparing for the global expansion of his unisex fragrance line, which sure adds more money to Nacho Figueras's net worth.

In 2020, Figueras purchased a condo in the new Coach House Wellington development, located next to the Equestrian Preserve. The price range of luxury houses in this area costs around $2.5 million to $8.75 million. 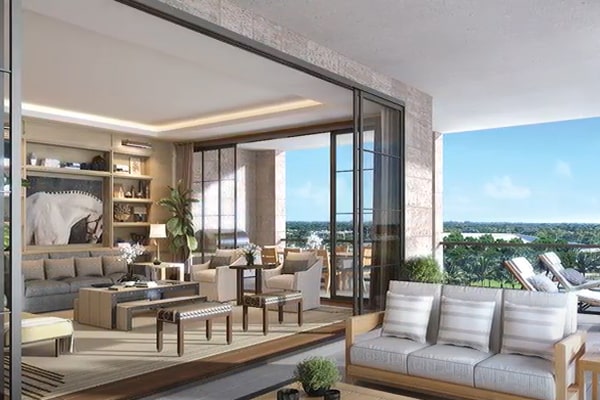 Nacho Figueras's net worth doesn't end here. Along with owning a 30-acre Argentinian breeding ranch, he is an investor in wellness brand Flow Water, an investor and global ambassador in Netjets and Veuve Clicquot, and one of the Board of Directors of Fubo TV. He has also collaborated with renowned Argentinian winery Catena Zapata.

No matter how much wealth he generates, Figueras considers spending time with family as the biggest luxury.