Home Featured Articles 7 Father-Son Duo Who Have Done Well In The World Of Sports.

Here are some of the father and son duo who have earned fame and fortune in the sports field. Image Source: SnappyGoat.

In the world of sports, many athletes compete to become the best in their respective fields. Sportspersons' work had to reach specific goals in their career. These people risk their health and even their lives for their passion for sports. Their love for the sport lead players to inspire and train their children to become even better than themselves.

Many upcoming and already existing athletes have followed their father's footsteps into their respective careers. The next-generation players have learned the fundamentals of sports from the very person they look up to please and become. Here are the picks for 7 Father-Son duos who have done well in the sports world.

The former professional baller Dell Curry played for the Charlotte Hornets in the NBA league. He was active from 1986-2002 before retiring with 12,670 points, including a 929 three-point field score with 1,909 assists and 2,617 rebounds. Dell Curry has been awarded many titles throughout his career, like the NBA Sixth Man of The Year(1994), Metro Conference Player of the Year(1986), Virginia Mr. Basketball, and many more. The former professional player always brought his children to his games and events. He even trained his son Wardell Stephen Curry II, best known as Stephen Curry, himself throughout his young years. 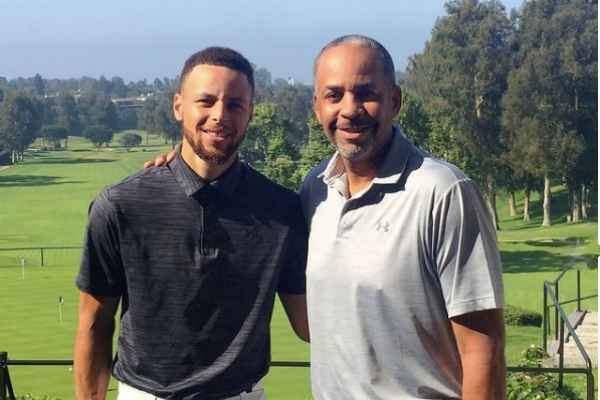 Stephen Curry grew up with the NBA surrounding him due to his father's connections, but nobody thought Steph would become the legend he is today. The baller learned the game from his father and followed in his footsteps to become a complete game-changer in one of the world's most-watched sport. Today, Curry is known as one of the greatest basketball players in NBA history, surpassing his father's achievements. However, most experts have compared his moves to be similar to his father's. Steph has been awarded the NBA Most Valuable Player (2015,2016), NBA Sportsmanship Award (2011), NBA All-Rookie First Team (2010), AP Athlete of the Year (2015), including many more. The father and son have achieved significant honors in their respective careers and continued their family's athletic legacy.

Well, not just Stephen, but Dell's other son, Seth Curry is also a renowned name and player in the NBA.

Michael Schumacher is a famous retired Formula One racer. The seven-time Formula One World Champion is regarded as one of the greatest F1 drivers of all time. He also inspired his brother Ralf Schumacher to pursue a career as an F1 driver. The German national drove for Ferrari and Mercedes for most of his career in the F1. 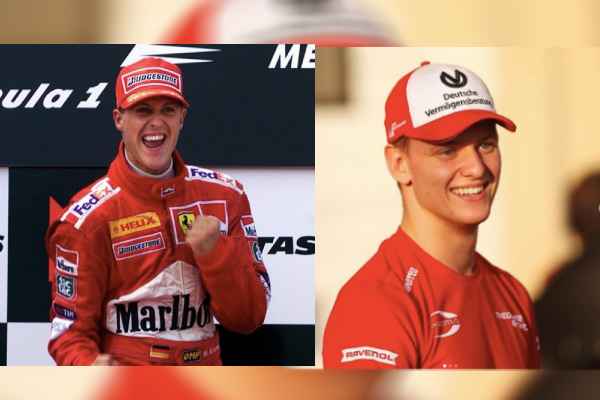 Mick Schumacher grew up watching his father's races and made up his mind to pursue a career in race-course driving. Image Source: Michael and Mick's Instagram.

Michael's dedication and love for fast cars along with track racing also motivated and inspired his son Mick Schumacher. The young German stepped into his father's shoes to pursue a career in racing sports. Mick drives for the Haas F1 Team in Formula One after signing a multi-year deal with the racing team. Mick is also a Ferrari Driver Academy member who started his career with Karting in 2008. He was upgraded to the German ADAC Formula 4 after winning the 2018 FIA F3 European Championship. He also went on to win the 2020 Formula 2 Championship, which got him promoted to the F1. He is the third member of his family to race in the F1 after his father and uncle Ralf carrying the family's name in the racecourse.

Peter Schmeichel is a former professional soccer player known for being a goalkeeper at Manchester United in the English Premier League. The Danish national was also the club's captain when he led the team to win the UEFA Champions League final against Bayern Munich. Peter has also won the UEFA Euro Cup with the Denmark national team. He has also played for various soccer clubs like Manchester City, Aston Villa, Sporting CP, Hvidovre IF, Brøndby IF, and Gladsaxe-Hero. He ended his club career with 648 appearances, scoring nine goals. The Danish soccer player also played 129 games for his country at the international level and scored one goal. 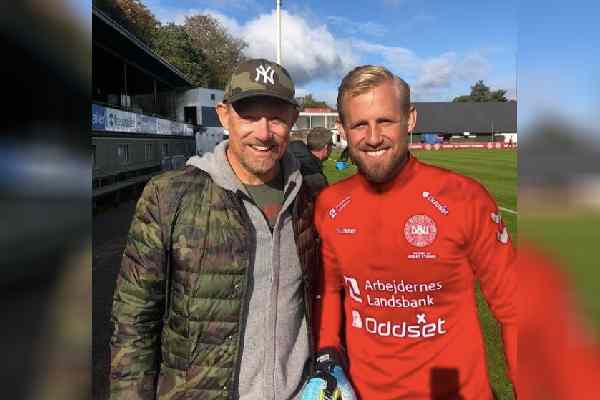 Kasper and Peter are the only father-son to both win the Premier League title. Image Source: Peter's Instagram.

Peter Schmeichel's son Kasper Schmeichel is also a professional soccer player currently playing for the Leicester City Football Club. Kasper comes next after his father to become a professional soccer player himself. He started his career with Manchester City and went on to gain experience in many soccer clubs like Cardiff City, Leeds United, and Notts County before finally joining Leicester City in 2011. In the 2015-2016 season, Kasper Schmeichel won the Premier League title with Leicester at the age of 29. The Schmeichels are the only biological father and son who played in the same position to win the Premier League.

Wayde Douglas Bowles was a professional wrestler. He was born in Amherst, Nova Scotia, in Canada. He was notably known by his ring name Rocky Johnson. The wrestler was the very first African-American to win the Georgia Heavyweight Champion. Rocky also partnered with Tony Atlas to become the first black World Tag Team Champion in WWE history. He also worked as a wrestling trainer for the Ohio Valley Wrestling in 2003 for a short time. In February 2008, he was announced into the WWE Hall of Fame alongside his father-in-law Peter Maivia. The wrestler later retired in 1991 and trained his son Dwayne Johnson to wrestle. Though Rocky had not allowed his son's request to enter into the wrestling business, he decided to teach Dwayne to wrestle by not going easy on him. Sadly, Rocky passed away on January 15, 2020, after suffering from a pulmonary embolism.

Rocky's son Dwayne Johnson continued his training to rule the ring as one of the top wrestling contenders. Dwayne Douglas Johnson, notably known as The Rock, started his wrestling career in 1996. He has since won many honorable awards like USWA World Tag Team Championship, WCW Championship, WWE Championship, WWF Intercontinental Championship Royal Rumble, Deadly Games WWF Championship Tournament, etc. The Rock became known for his family's wrestling background and continued to pursue his father's footsteps inside the ring until 2016. He later went on to work for the film industry to work as an actor. Today Dwayne Johnson is one of the most successful and highest-paid actors in Hollywood. His acting credits include The Scorpion King, The Mummy Returns, Rampage, Race to the Witch Mountain, Jumanji, The Mysterious Island, the Fast and Furious franchise, Pain and Gain, Hercules, Central Intelligence, Moana, Baywatch, Skyscraper, etc.

Jos Verstappen is a former Dutch F1 driver. He is considered one of the most successful F1 racing drivers from the Netherlands. The former racer was the winner of the German Formula Three and Masters of Formula Three in 1993. Every single Formula One team approached him except for Ferrari and Williams Grand Prix Engineering. He was a substitute partner with Michael Schumacher and made his F1 debut in 1994 Brazilian GP. In his debut race, Joe's car somersaulted after crashing with Irish national Eddie Irvine's car, which triggered multiple accidents, but he came out unharmed. He retired from his racing career in 2009 and began to train his son Max Emilian Verstappen. 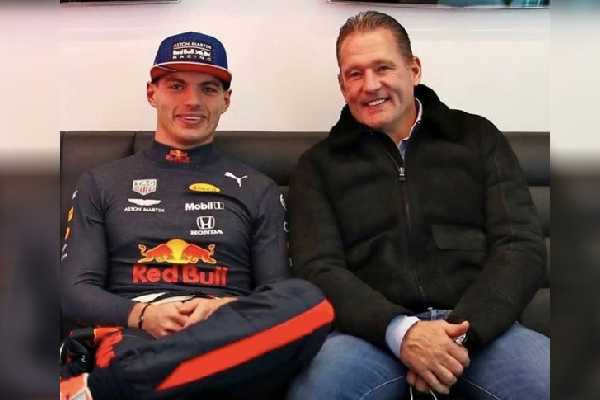 Max Verstappen and Jos Verstappen are both regarded as one the greatest Dutch racers . Image Source: Jos's Instagram.

Max Emilian Verstappen stepped into his father's shoe to head towards a professional career in sports. The young racer learned the art of driving from his father, Joe Verstappen, who taught everything he had learned through his career to Max. Max Verstappen has undoubtedly inherited his father's talent behind the wheel. He was signed by Red Bull Racing, becoming the youngest driver to ever compete in Formula One. He became the youngest driver and the first Dutch to win a Formula One Grand Prix at the 2016 Spanish Grand Prix at the age of 17. He has since started 119 races with ten wins, forty-two podiums, and three pole positions.

Zinedine Zidane is a former French professional soccer player and is the current Real Madrid FC manager. The soccer player is regarded as one of the bests of all time while also being named one of the world's most successful soccer managers. Zidane has won three FIFA World Player of the Year, including the 1998 Ballon d'Or. The former France captain was also one of the most expensive players in his career period after signing a $108 million contract with Real Madrid in 2001. His achievement consists of UEFA Champions League, 1998 FIFA World Cup, 2000 UEFA Euro Cup. Zinedine Zidane was regarded as a national hero in France and received the Legion of Honour. In the 2006 World Cup Golden Ball, he was sent off with a red card after headbutting Marco Materazzi in the chest. Zidane headed for a new career as a coach following his retirement. In his first two seasons, Zidane became the first coach to win the Champions League three-time consecutively alongside the UEFA Super Cup and the FIFA Club World Cup twice alongside the La Liga title and one Supercopa de España. 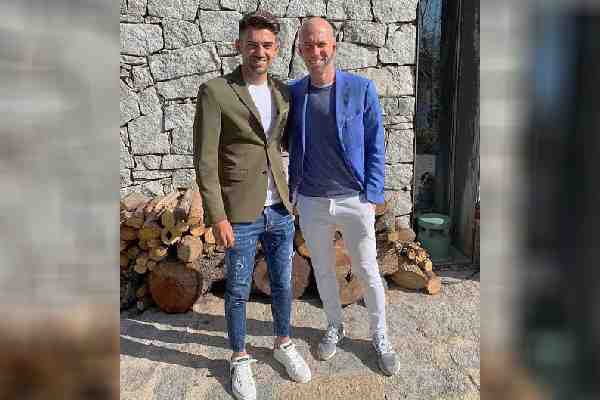 The soccer legend also trained his four children to become soccer players as well. Enzo Alan Zidane Fernández, who has played for various clubs in midfielder position, takes his father's place to become the next professional soccer player in their family. His three brothers are also pursuing to become as skilled as their father, Zidane. Enzo Zidane was named after his father's idol Enzo Francescoli from Uruguay. Enzo trained at Real Madrid's youth academy from 2004 till 2011, after which he was invited to train with the club's first team by José Mourinho. Young Zidane went on to play for various clubs like Deportivo Alavés, FC Lausanne-Sport, C.D. Aves Almería and Real Madrid. The young star has three citizenship and is eligible to play for Algeria, Spain, and France.

Mychal George Thompson is a former professional basketball player in the NBA league. He had played for clubs like Portland Trail Blazers, Los Angeles Lakers, and San Antonio Spurs. The professional had a career stats of 935 games played with a score of 454. He has won two NBA championship titles with the Lakers. Following his retirement from his career, Thompson became a color commentator for the Los Angeles Lakers. 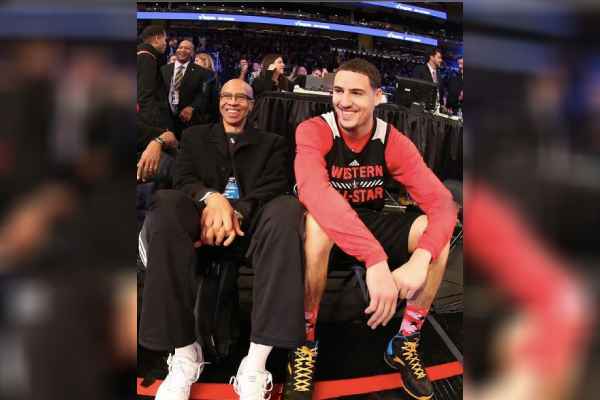 Klay Thompson stepped in to his father's shoes to become one of the greatest shooters in NBA. Image Source: Klay's Instagram.

The father of three inspired his children to become successful sportsmen. His two sons Klay Thompson and Mychel Thompson, are professional basketball players, while Trayce Thompson is a professional baseball outfielder for Arizona Diamondbacks. However, his eldest son Klay Alexander Thompson has surpassed his father's popularity in the NBA. The Golden State Warriors shooting guard is known for his shooting skills and is considered one of the greatest shooters in NBA history. Klay has won three NBA Championships and has been named the NBA All-Star five times. His training and exposure from an early age with his father have made him one of the most celebrated league players.