7 Celebrities Who Have Dated Or Even Married Their Bodyguards

Home Featured Articles 7 Celebrities Who Have Dated Or Even Married Their Bodyguards.

As bodyguards' work demands them to be close and personal, famous celebrities dating their bodyguards is not new news. Photo Source: Social Media.

As celebrities' fame grows by the day, fans are more than willing to go out of their way to meet or get close to their idols. Furthermore, it is not unheard of for VIPs to be harassed by obsessed fanatics while making public appearances. Besides, fans are not the only thing these famous personalities have to worry about; the paparazzi and the media are constantly pursuing them to obtain insight into their personal lives.

However, constantly being in the spotlight does not always attract positive attention, and notable public figures have received aggressive messages and threats in several instances. With so much online criticism aimed at their personalities and the characters they play on-screen, haters have been known to issue death threats and violent responses.

Thus, it is common for prominent celebrities to spend millions hiring proper security to guarantee their protection and safety. These stars are often seen accompanied by handsome and bulky hunks acting as their escorts whenever they are out in public. Nevertheless, these bodyguards tend to get up close and personal while doing their job. With so much intimacy and time spent together, the professional and personal lives of celebrities get blurry.

Consequently, celebrities brewing romances with their defenders is not new news. Additionally, there have been several occasions where these stars have been spotted making out in public. Here, we will discuss seven celebrities who were caught in action with their bodyguards.

The German supermodel, Heidi Klum, is a well-known TV personality and a businesswoman. You may recognize the blonde for her appearances on popular TV shows like 'Project Runway' and 'America's Got Talent.'

This former Victoria's Secrets model's love life has been full of ups and downs, as she has been married three times and has been romantically linked with numerous other celebrities. Nonetheless, Martin Kirsten's name is the most surprising, given that he used to be Heidi Klum's bodyguard. 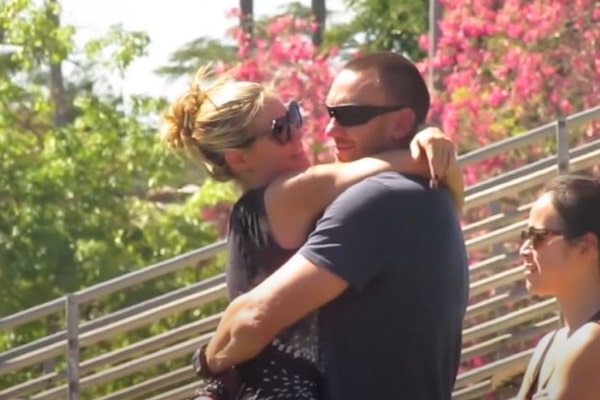 After Heidi filed for divorce from her former husband, Seal, back in 2014, the model started seeing her bodyguard, Martin. At the time, Martin had been serving as the blonde's bodyguard for over four years. In an interview with Katie Couric, she spoke about Martin:

"He has cared for our entire family, primarily for our four children. He helped us tremendously. He's a great man, and we just got to know each other from a completely different perspective. "

The couple dated for about a year and a half before calling it quits in late 2013. According to an inside source, the couple parted ways because Martin became bored with being a househusband.

As of 2021, Heidi Klum is married to German musician Tom Kaulitz.

Jennifer Lopez, nicknamed by her admirers as J.Lo, is an American singer, dancer, and actress. The Grammy-winning singer is one of the leading ladies of the entertainment industry, boasting a whopping net worth of $400 million.

Throughout her career, the pop star Jeniffer Lopez has been involved in several high-profile relationships. However, many people are unaware that J.Lo's first husband, Ojani Noa, was her reported bodyguard and personal trainer. 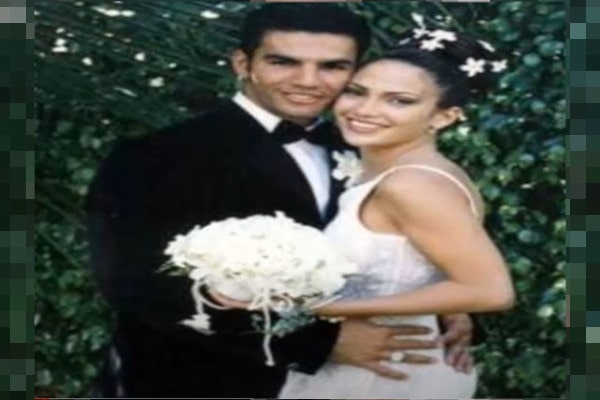 The couple was married for just ten and a half months, from 1997 to 1998. Even though the marriage was short-lived, J.Lo faced trouble during the divorce as both parties were unable to reach an appropriate agreement point.

Since then, Jennifer has been married twice, first to an American actor and choreographer, Cris Judd, and then to another singer, Marc Anthony. The artist recently made her relationship with Ben Affleck Insta-official.

The Canadian celebrity Pamela has been linked intimately with multiple other prominent personalities. Moreover, the artist was married four times, which all ended up in divorce. In contrast, Anderson tied her wedding knot for the fifth time in her life with her bodyguard, Dan Hayhurst, on 24th December 2020. The couple married secretly on Canadian soil in an intimate ceremony after falling in love during the lockdown. 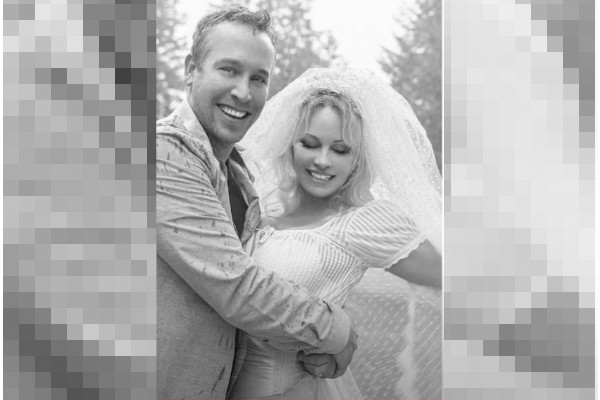 The blonde actress told DailyMailTV after their marriage, "I'm exactly where I need to be, in the arms of a man who loves me."

Britney Spears, often dubbed as the "Princess of Pop," is an American singer, songwriter, dancer, and actress. Moreover, the skilled artist is credited with inspiring the revival of teen pop in the late 1990s and early 2000s.

Britney, born Britney Jean Spears, has had both a troubled career and a romantic life. Unfortunately, dating hasn't been easy for this blonde musician, as any intimate relationships she's had ended abruptly.

Then again, Spears has had intimate relationships with two of her bodyguards. According to the rumors, she was dating her ex-Israeli soldier bodyguard, Lee, in 2008. In addition, she was linked to another bodyguard named Ryan in 2010. 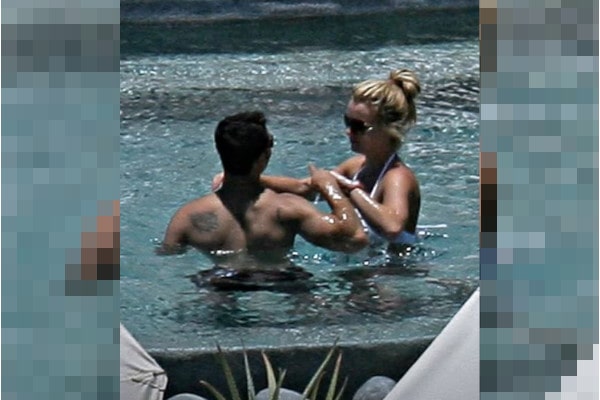 Paparazzi caught Britney Spears having a fun time with her bodyguard in 2008. Photo Source: Social Media.

As of 2021, the princess of pop is in a healthy relationship with Sam Asghari. Previously, she was married to American rapper Kevin Federline, nicknamed K-Fed, and her childhood friend, Jason Allen Alexander.

The late Amy Jade Winehouse was a British singer-songwriter who gained international acclaim for her rich, expressive contralto vocals and varied musical genres.

Amy was married, divorced, and had a turbulent sequence of love affairs during her brief life, which helped inspire much of her music.

Apparently, after her divorce from Blake Fielder-Civil, the British singer Amy dated her then bodyguard, Neville, for a while. The late artist even allegedly told her friends, "He makes me feel safe because he's big and strong." 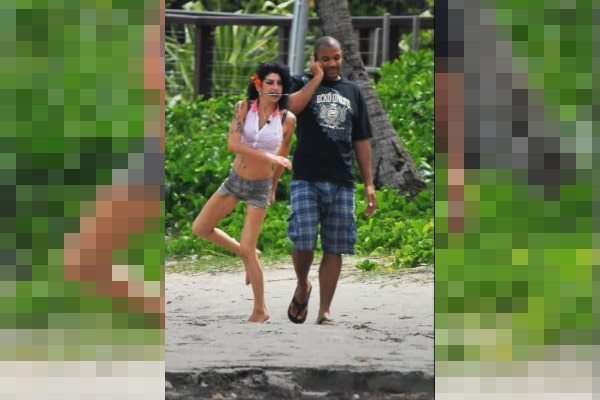 Nonetheless, the two of them were romantically associated for a few months before their relationship fizzled out.

The late actress Dame Elizabeth Rosemond Taylor, popularly known as Elizabeth Taylor, was one of the most popular stars of classical Hollywood cinema. Although she ended her career in the 1960s, she remains a well-known public figure to this day.

Elizabeth was infamous for falling in love in the blink of an eye, and she was married eight times to seven different men throughout her life. However, her last husband, Larry Fortensky, was none other than a personal bodyguard for the Hollywood actress.

After her divorce from the former American politician, John W. Warner, Elizabeth remained single for over a decade. Eventually, she decided to enter into wedlock with Larry. The duo was together from 1991 to 1996. Even though the reason for their split up is unknown, they remained close friends till Elizabeth's death.

Princess Stéphanie Marie Elisabeth, the youngest daughter of the late Prince Rainier III and Princess Grace Kelly of Monaco, inherited her mother's movie-star personality and dazzling beauty. Stephanie, on the other hand, has had a pretty chaotic love life, unlike her mother.

The Princess, known as the family's wild child, married her former bodyguard, Daniel Ducruet, in a civil wedding at the Palace of Monaco. Later, it was discovered that the pair had been dating for a long time prior to their marriage and even had two children together.

Unfortunately, the marriage lasted only a year as Daniel was caught getting romantic with another lady and was promptly kicked out of the Royal family.

Then, in 2003, Elizabeth married Adans Lopez Peres, a Portuguese acrobat. However, the relationship, like her first marriage, lasted only a year.

The above-mentioned couples are among those whose relationship was publicized. However, there might be many other celebrity-bodyguard duos who have dated in the secret.