If you haven't heard of Ryan Reynolds by now, you may not have turned on the television in the last decade. The Hollywood heartthrob has been all over the place, and while he has had a few flops in his film career, he still had enough spectacular hits to drive himself to the level of top actor. Ryan has been alongside some of the greatest actors of all time and held his own, sometimes exceeding expectations.

Furthermore, the Hollywood icon is widely recognized for his acting projects like Buried, Deadpool, Free Guy, The Adam Project, and The Proposal, to name a few. However, today, through this article, we will talk about his elder sibling, Patrick Reynolds, who has been able to make his place in the world of technology. Hence, wouldn't it be interesting to learn more about this tech guy?

If so, stick with us till the end as we will cover all the information regarding Ryan Reynolds' brother, Patrick.

His Siblings Have All Grown Up

While some people don't mind being vocal regarding their personal life, a few hesitate to publicize their life and instead maintain a low-key profile. Out of them, Patrick is a personality whose birth details have not been revealed yet. However, he was raised in Vancouver, British Columbia, Canada, by his father, Jim Reynolds, and mother, Tammy Reynolds.

Moreover, while Patrick Reynolds' dad worked as a Royal Canadian Mounted Police officer, his mom was involved in retail sales. Later, Jim retired from his work to serve as a food wholesaler. Besides, Patrick's paternal grandfather, Chester Reynolds, was a farmer who represented Stettler in the Legislative Assembly from 1940 to 1944.

Apart from this, Patrick has been a wonderful brother to Terry Reynolds, Jeff Reynolds, and Ryan. All the Reynolds brothers have grown up and are involved in their respective careers. They are very supportive of each other, and we hope their bond will remain strong.

Patrick's brothers, Terry and Jeff, are police officers who have been working in law enforcement for many years. On the other hand, his youngest sibling, Ryan, is an established actor, as mentioned earlier. Now, let's get to know more about Patrick's educational background and career in the following subheadings.

Is A Highly Intellectual Person

Patrick seems to be somebody who extremely prioritizes education and understands the importance of being educated. Hence, he has not made any compromises while studying. The tech guru first joined Emily Carr University of Art and Design to pursue a Bachelor of Fine Arts. Later, he attended the University of British Columbia in 1999 and completed his diploma in multimedia in 2000.

Furthermore, Ryan Reynolds' brother enrolled at Simon Fraser University and first completed his Bachelor of Education in 2012. Then, he earned an Imaginative Education Diploma in 2017.

A Brief Glance At His Established Professional Career

Just like Ryan, his elder brother, Patrick, also has a striking, professional background. Initially, he worked as a manager at FEDEX KINKOS, where he was responsible for managing up to 35 people and businesses based on profit and loss statements. Patrick's other managerial position came with Starbucks, where he looked after all areas of the operation.

A few years later, in May 2005, Ryan Reynolds' elder sibling started working as the executive director at the Community Arts Council of White Rock and District until March 2012. Similarly, Mr. Reynolds is also the owner of Runt Communications; there, he also served as a new media developer from May 1998 to January 2013.

Not just that, Patrick is also a visual artist and a teacher. In David Brankin Elementary School, he taught grade 3 and 4 students about project-based problem-solving. Reynolds has also worked in Surrey School District as a teacher on call. 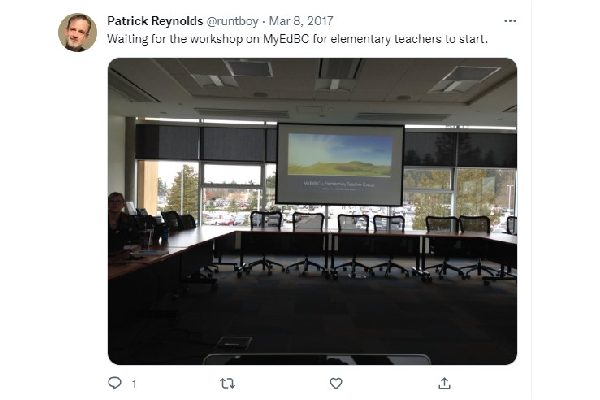 Since we have already discussed his professional career, let's dig into Mr. Reynolds' personal life.

Patrick not just shares a stable professional career, but he also has a solid personal life. Talking about his love life, he is happily married to Sheila Reynolds. The lovebirds exchanged wedding vows on August 7, 1993, and have been together for over two decades. The reason behind their long-lasting marriage must have required a lot of forgiveness, compatibility, and intense love for each other.

Furthermore, Patrick Reynolds' wife, Sheila, serves as an assistant manager of communication services at Surrey Schools. Previously, she worked as a freelance writer and editor. Mrs. Reynolds is a very supportive spouse who has always been there for her husband. Overall, Patrick and Sheila have a love that is as beautiful as the sunrise, and we hope their marriage will last forever.

Ryan Reynolds' brother, Patrick, is a kind, giving, and selfless father. A loving and devoted dad of one son and one daughter, he has never made any compromises while raising both of his children. Alongside his wife, Sheila, Patrick has been looking after their kids and fulfilling every parent's responsibility.

In addition, Mr. Reynolds is a very cheering and supportive dad. On his Twitter account, he has often been seen supporting his daughter in the art theatre and motivating his son while playing soccer. Besides, Patrick Reynolds' children are still growing up, so watching what the future holds for them will be interesting.

Overall, the Vancouver native seems to have a well-balanced personal and professional life. He is a loving husband and a devoted father of two. Technology and art play an essential role in his life, and he enjoys incorporating them into everything he does. We wish Patrick success in all of his future endeavors.