Ryan Reynolds is a name that probably needs no introduction in the entertainment industry. The Hollywood heartthrob has been acting for decades and is no stranger to our movie screens. Ryan, who is considered a national treasure in Canada, is one of the highest-grossing film personalities of all time, with a worldwide box-office gross of more than $5 billion.

However, today's article is not entirely dedicated to the Deadpool actor, as we will talk about his elder brother, Jeffrey Reynolds. Jeffrey is quite a secretive person, and the media hasn't covered much about his personal and professional life. Hence, tighten your seat belts to know more about Ryan Reynolds' brother, Jeffrey.

Aly Michalka's Husband Stephen Ringer Has Worked As A Cinematographer

Grew Up Alongside Three Brothers

While Ryan is always surrounded by paparazzi and his personal life is easily traced by the media, his elder sibling, Jeff Reynolds, is less covered by them. In addition, he likes to maintain his personal details low-key. Still, as per several sites, he was born on November 30, in Vancouver, British Columbia, Canada.

Jeff was welcomed into this world by his father, James Chester Reynolds, and his mother, Tamara Lee Reynolds. While his dad was a Royal Canadian Mounted Policeman, his mom worked in retail sales. Later, James retired from the force and began working as a food wholesaler.

Furthermore, Jeff grew up alongside three brothers; Patrick Reynolds, Terry Reynolds, and Ryan. All his siblings have grown up now and share an established professional life. Also, all the Reynolds brothers share a very close and tight-knit bond; they have always been there for each other.

Jeff Is Not Into Acting

Since Jeff's younger brother is actively working in the entertainment industry, many people naturally assume he must also be involved in the acting sector. However, that's not the case, as Mr. Reynolds has been away from the media field and is living a very content life.

According to the outlet Showbiz Cheat Sheet, Jeffrey serves as a police officer in British Columbia. Likewise, his other brother, Terry, also works in law enforcement and is a Royal Canadian Mounted Police officer. Apart from this, not much is known about Jeff's professional career, and it is unsure if he has ever appeared in any acting projects. Nonetheless, it appears Jeff and Terry have been following in their dad's footsteps.

Besides, Jeff's third brother, Patrick, selflessly works for the community, and the youngest sibling among them, Ryan, is a Hollywood icon. Now, let's know more about Jeff Reynolds' younger brother, Ryan's acting projects, which are undoubtedly exciting for many people to learn about.

His Younger Brother Is A Superstar

As mentioned earlier, Jeffrey's youngest sibling, Ryan, is a name that is celebrated and recognized worldwide. Born Ryan Rodney Reynolds, he is a talented Canadian-American actor best known for playing a broad range of roles in films such as Van Wilder and Waiting, Green Lantern (2011), and Deadpool (2016).

Reynolds, who was born and raised in Vancouver, British Columbia, landed his first professional TV acting role when he was 15 years old. The actor has over 120 acting credits under his name and has bagged several awards. Besides, the Deadpool actor is extremely close to his elder brother, Jeff. Ryan mentions Jeffrey as his best friend and often expresses gratitude for having him in his life. 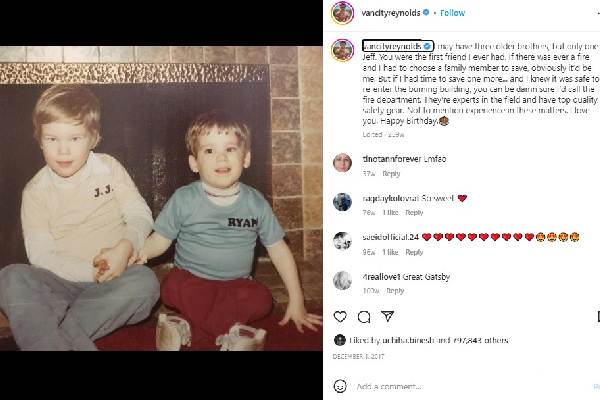 Overall, the Reynolds brothers are very fond of each other and are content with their lives. Since many people are interested in learning about Jeff Reynolds' partner and children, let's get to know more about his personal life in the following subheading.

His Personal Life Is Low-Key

By now, you must have understood that Ryan Reynolds' brother is very secretive. Hence, only a little is known about his personal affairs as well. Likewise, it is also unknown whether he is married or has children. Nonetheless, viewing his private Instagram account, it seems Jeffrey is a married man with a daughter. In his display picture, Jeff is seen smiling with a woman and a young girl.

Besides, Jeff's younger brother, Ryan, is also a family guy. Talking about the actor's wife, he exchanged the wedding vows with American actress Blake Lively on September 9, 2012, and they are parents to three daughters.

Overall, we tried to cover some information regarding Ryan Reynolds' older sibling, Jeff. Although he is a resolved person, we hope he leads a content life and that this article was insightful to read. May good luck always favor the Reynolds family.