Liz Koch is the chairman of the board of the Koch Cultural Trust and president and director of the Fred and Mary Koch Foundation. Image Source: Social Media.

Koch Industries is a privately held multinational conglomerate corporation of America and the second largest privately held company in the world. Charles de Ganahl Koch has been the co-owner, chairman, and CEO of Koch Industries since 1967. Being the CEO of such a reputed industry, Charles' personal life has caught the attention of many people.

To speak of his personal life, Charles is happily married to Liz Koch. In fact, the duo has been together for several years and has been facing every obstacle of life together. So, in today's short article, let's get to know more about Charles Koch's wife, Liz.

In 1986, Liz established the Koch Cultural Trust to support talented artists with roots in Kansas. The trust creates chances for the most promising musicians, painters, dancers, performing artists, and sculptors. Not only that, it even provides grants to help advance their talents and pursue key opportunities early in their career.

Similarly, Liz also serves as the president and director of the Koch Family Foundation (formerly Fred and Mary Koch Foundation). The foundation has given millions of dollars to help education, the poor, at-risk youth, the arts, and environmental causes. Liz and her spouse also donated $10.5 million in land and money for the building of a new home for the Wichita Center for the Arts.

Bill Laurie is another philanthropist who has a massive fortune.

Liz Has Been Married To Charles For Decades

Well, we discussed her philanthropic ventures, now, let's take a look at Liz's personal life. As mentioned earlier, she is the partner of Charles. The lovebirds tied the knot back in 1972. So the couple has been married for five decades.

Besides that, not much has been disclosed about the Koch duo's love story. As per one interview, the pair first met in the early 1960s. As the Koch couple is not active on social media, it becomes even more challenging to learn the truth about their marriage. Nonetheless, we hope the lovely duo will soon reveal more about their marital details in the coming days. 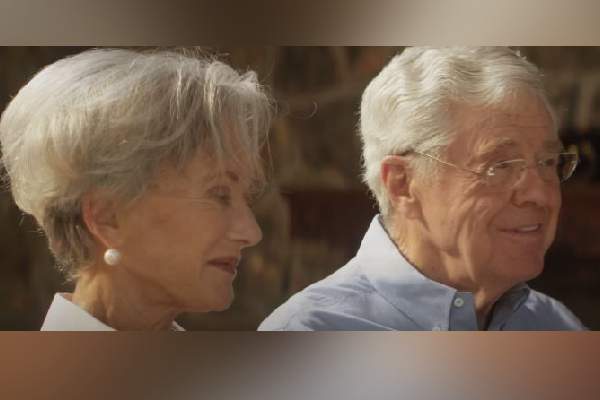 Liz Koch and Charles Koch got married in 1972 and has been enjoying marital bliss since. Image Source: Social Media.

Furthermore, Charles Koch's wife, Liz, seems to be a secretive person and seldom talks publicly about herself or him. However, during the interview with McClatchy DC, Liz revealed that she had given her hubby his every haircut in all these years of togetherness. She also disclosed that Charles is a family man, kind, generous, and not greedy. From all these, we can say she is very supportive and has been there for him since day one.

Moreover, Charles used to take his wife skiing and on other vacations. The Koch couple owns several houses. Currently, they reside in Wichita, next to the Wichita Country Club. Likewise, Liz Koch's husband owns homes in Aspen, Vail, and he paid $10 million for a 7,500-square-foot home in Indian Wells, California, in 1999. Similarly, in 2018, Koch purchased the property next door for $3.25 million.

Is A Loving Mother Of Two Children

Liz and Charles' eldest child is Elizabeth Robinson Koch, who was born in 1976. Elizabeth graduated from Wichita Collegiate School. Later, she attended Princeton University and earned a B.A. in English Literature. She then earned an M.F.A. in fiction from Syracuse University.

Similarly, Liz revealed when she was pregnant with Elizabeth, her mother-in-law Mary Koch, introduced her to the Wichita Center for the Arts and tried to teach her silversmithing and enameling. She also revealed that Mary was a beautiful craftsman.

Furthermore, one year after the birth of their first child, the Koch couple welcomed their son, Charles Chase Koch, on June 15, 1977. He attended Wichita Collegiate School just like his sister. Later, he attended Texas A&M University and completed his B.S. in marketing. Moreover, Liz Koch's son was previously married to Annie Breitenbach, a former neonatal nurse.

Furthermore, Koch Industries launched CGKon Parenthood on father's day of 2017. CGKon is a series that includes a personal glimpse into the life and thinking of Charles Koch. In the video, Liz and Charles have opened up about how they raise their children. The couple has also talked about the importance of instilling values and principles in their kids at a young age.

Well, now, let's take a look at the video.

Despite being so busy with their work, Liz and Charles have managed to raise their children in supportive family background. All in all, we can see that they have raised their babies quite well, and both of them have grown up and are enjoying their lives to the fullest. Liz is undoubtedly a proud mom.

The gorgeous philanthropist was born in the mid-40s in Wichita, Kansas. As Charles Koch's wife is a private person, she has successfully maintained complete secrecy regarding her relationships from the public eye. So, the information regarding Liz Koch's father and mother has not been revealed yet.

Moreover, Liz has kept her early years private and hasn't been too forthcoming about her life. Speaking of her education, regrettably, it is unknown where she completed her high school studies from. Likewise, there is no information regarding her higher studies.

Well, we wouldn't know unless Liz speaks out about it. Hopefully, she will disclose more information regarding her personal affairs and marital life soon. Nonetheless, Mrs. Koch appears to lead a great and happy life with her loved ones. We wish her more fame and fortune in the forthcoming years.