One of the wealthiest American families, the Kochs' fortune primarily comes from their family business, Koch Industries. Founded by Fred C. Koch, his following generations have been running the firm for several decades now. Julia Koch has a nearly 50% stake in Koch Industries, which she inherited from her late spouse, David Koch.

Having recently topped the Forbes list as the richest woman in the US, Julia isn't only just a socialite. She is also a doting mother of three, whom she shares with her late husband. In today's article, we will be talking about her little girl Mary Julia Koch, who has a relatively low media presence. So, keep reading to learn some unheard facts about Mary.

Her Father Was The Co-Owner Of Koch Industries

Mary was born in the late 1990s to her parents, David and Julia Koch. Mary Julia Koch's father was a renowned industrialist and co-owner of Koch Industries with his brother Charles Koch. The firm is involved in numerous industries such as chemicals and biofuels, refining, fertilizers, forest and consumer products, etc. Sadly, David passed away in August 2019 at his residence in Southampton.

Only Daughter Of Her Parents

The younger Koch is the only daughter of her loving parents. She was raised in New York alongside her two siblings, David Koch Jr. and John Mark Koch. Among them, David is the oldest and attended Duke University. On the other hand, Mary Julia Koch's youngest brother, John, attended Manhattan Preparatory School.

However, Julia and David Koch's children have remained away from the limelight. So, besides the kids' educational background, much about their day-to-day life hasn't been divulged. Nevertheless, the Koch siblings must be doing well and growing up in a loving environment.

Mary Is An Editor

It isn't necessary for kids to follow in their parents' footsteps, some might decide to pursue a career in a different field. Likewise, many might assume Julia Koch's daughter to be involved in her family business. On the contrary, she seems to have a different career interest, i.e., journalism.

Like her older brother, Mary is also enrolled in a prestigious university. She is attending Harvard University and lives in its residential house, Lowell House. In addition, she is in her senior year and is studying 20th-century US history at uni. Not only that, the college student is also the editor of a weekly student newspaper.

Furthermore, the gorgeous lady trained at the School of American Ballet in NYC. She attended The Spence School prior to joining Harvard. Mary and her friend Alice Maxey were formally presented to the media in 2019. Both were also featured in Palm Beach Illustrated's February publication.

Considering how Mary is still in college and yet to graduate, it can be said that she hasn't started her professional career. Still, looking at her journalistic aspirations, will Julia Koch's daughter be involved in media in the future? Who knows, she might even start working in her family business or start a company of her own.

Nevertheless, Mary has a bright future ahead, and we wish her nothing but the best. Speaking of career and fortune, did you know her mother, Julia, topped Forbes' list of America's wealthiest women in September 2022? She unseated Alice Walton, who had held the top spot since 2015.

Is The Harvard Student Dating Anyone?

While talking about the Kochs, people mainly recognize Charles and David Koch. The brothers handled the operations of Koch Industries for many years and are credited for the multinational conglomerate's current status. Alongside David's professional success, his marital life with Julia also became a topic of interest among people.

Well, for starters, Mary Julia Koch's parents have more than twenty years of age difference. The couple met on a blind date in 1991, which turned into marriage in 1996. Both went on to enjoy conjugal bliss until David's demise. So, what about the Koch pair's only daughter; has she also found the perfect one? 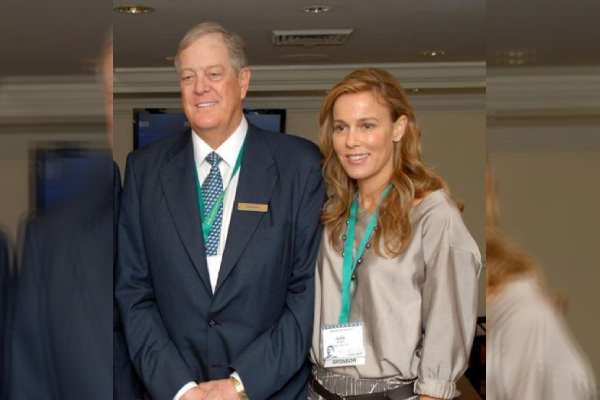 Many people are curious whether Julia and David Koch's daughter, Mary Julia Koch, is in a relationship. Photo Source: Wikimedia Commons.

Sadly, the Independent editor-in-chief has remained silent regarding her relationship status. She has little to no social media presence, making it hard to learn about her partner. Moreover, her IG account, which has an impressive 2K followers, is also kept private. Hence, information regarding Mary Julia Koch's boyfriend is very scarce.

Nonetheless, the blond beauty must be looking forward to a lovely relationship like her parents. As she is the only baby girl of her mom and dad, she must have been pampered from a young age. Her relationship with her siblings must also be swell.

All in all, Mary is a secretive person and is serving as an editor for Harvard Independent. She must have greater aspirations and goals, for which she is likely working hard. Hopefully, she will be a bit more open about herself in the future. Our best wishes are with the junior Koch.