If you see Jim Cantore nearby, that means a major storm is headed that way!

Jim Cantore, 58, the beloved meteorologist of The Weather Channel, is a leading weather authority who has contributed a lot to making the channel source of all severe weather coverage.

Cantore, the feared storm tracker, is known for his live reporting during the terrible and biggest weather events for more than 35 years. He tracks, and he is there to report where the worst is yet to come.

So, where is Jim Cantore now? Let's see the updates!

On Sunday, September 25, Jim Cantore was reported to be in Tampa Bay ahead of Tropical Storm Ian's run-in with Florida later this week.

Cantore is known to be dispatched to areas to see and report the horrible effects of tropical storm events. On Sunday, Cantore was reporting live from Clearwater Beach, Florida. 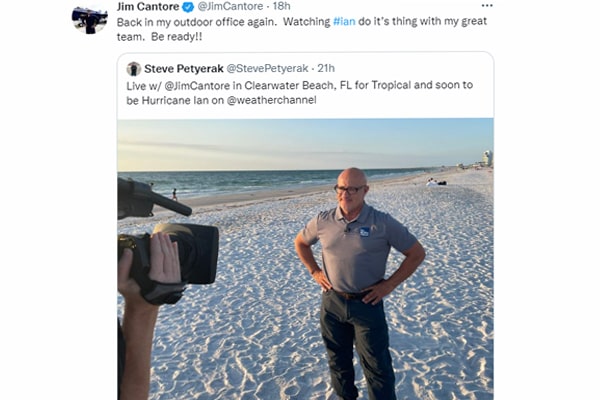 Just when Eastern Canada recovered from Hurricane Fiona, what was once a Tropical Storm Ian turned into a Hurricane Ian and is headed to affect Florida in the middle of this week. State emergency is already announced there, and people are asked to make preparations for food, safety, and possible evacuations.
It is reported that climate change is playing a role in strengthening tropical storms and hurricanes. Storm Surge and the rain-induced wind is starting to show a preview of what Hurricane Ian will bring later this week.
On September 23, Jim had broken down the forecast of Tropical Storms and Hurricane Fiona with CBS. You can get the details in his tweet.

Hurricane Fiona continues its destructive path as it moves north — but eyes are now turning to Tropical Depression Nine moving toward Cuba and Florida.@WeatherChannel’s @JimCantore breaks down its projected path. pic.twitter.com/fwCOBBJtwk

Just few hours before on Monday, Jim Cantore retweeted Hillsborough County's tweet about mandatory evacuation order for the county evacuation Zone A and voluntary zone B.

A Certified Broadcast Meteorologist, Jim Cantore graduated with a bachelor's degree in meteorology from Lyndon State College in Lyndonville, VT. Born and graduated from there, the best part is that Cartone visits the college to work and help the students with the meteorology program each year.

Cantore immediately started working with The Weather Channel after he graduated as he was hired out of college. Cantore did his first broadcast on air in July 1986.

It's been more than three decades, and Cantore has been reporting live and providing insights for the network before, during, and after the big weather events. Cantore is also known to be covering the latest forecast and weather news on weekdays on AMHQ from 6-9 a.m ET. He has been serving as a contributor for all major network affiliates nationwide.

Cantore is best at covering the worst. Have a look at one of his weather coverage.

Jim is a very good speaker and also is an ambassador for the American Red Cross and FLASH. Also appearing in many public service announcements as FEMA, Cantore is doing from his side to further help spread the message to families to prepare for severe weather.

Cantore is also active in participating in functions for several charities like Team Cantore for Parkinson's research, the National Fragile X Foundation, and FRAXA.

Meteorologist Reed Timmer In The Middle of Hurricane Ian!

A gardener, golfer, and skier Jim Cantore live with his family, his wife, and two children in Atlanta. This is a beautiful picture of Jim Cantore's family, his handsome son Ben Cantore, daughter Christina Cantore, and beautiful wife, Britley Ritz.