Jim Cantore is a popular broadcast meteorologist and a well-known TV personality. The American meteorologist is one of the nation's renowned forecasters who has been in the industry for more than three decades. He is famously known as an on-camera meteorologist for The Weather Channel Television Network.

Cantore's strong personality and captivating journalism stories keep the audiences at the edge of their seats. Broadcasting extreme weather and reporting on colossal hurricanes has always been a part of his meteorological journey. Today, let's look at Jim Cantore's biography.

Jim Cantore was born James D. Cantore in Beacon Falls, Connecticut, on February 16, 1964.  Eldest among the four adopted children, Cantore was raised by his father James Anthony Cantore and mother Betty Cantore in White River Junction, Vermont. Although any factual information about his siblings is not highlighted in the media, we have found that his brother Vinnie Cantore owns 'Cantores Pizza' in West Lebanon, New Hampshire. Digging up on his social media posts, we have found that his sisters' name is Carole Cantore and Paula Cantore. However, we cannot state any further information about his siblings since Jim is secretive about his family. 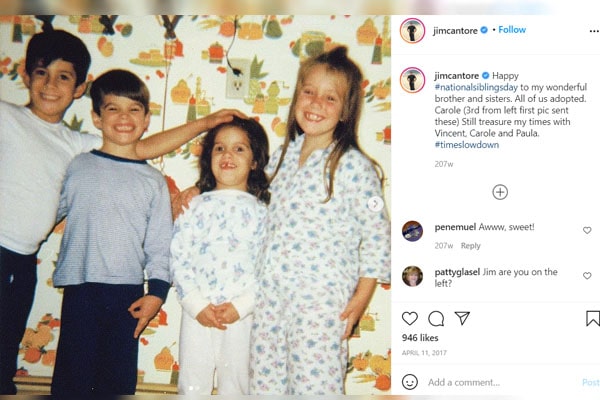 As a kid, Jim Cantore was often seen doing chores, especially in the house's garden area. He liked to work hard and prove himself on many grounds.

Cantore was also keen on weather journalism and forecasting from an early age. Following his passion, he successfully graduated from Lyndon State College in 1986 with a BS degree in Meteorology.

Soon after graduation, Cantore commenced his career as a weather forecaster in The Weather Channel in 1986. Since then, Jim has been working as a meteorologist in the nation's leading weather network for more than 34 years and is recognized as the face of the weather channel. He acquired the Certified Broadcast Meteorologist license from the American Meteorological Society in September 2011.

Cantore is mostly found on extreme weather events, mainly specializing in on-field disaster coverages before, during, and after the storms. As a meteorologist, he has covered some of the nation's major weather events, including mighty hurricanes such as Katrina, Rita, Floyd, Andrew, Ike, Gustav, Matthew, Irma, and many more. In the midst of extreme weather conditions, he breaks down complicated events into a simple language for the average viewer to understand. The underlying ability and years of hard work have made him one of the most respected and influential meteorologists in the country. He is also the main reason the channel ratings have soared up in the past couple of decades.

Besides live reporting for The Weather Chanel, he also serves as the narrator in the channel's series 'Storm Stories.'

Jim Cantore has worked for more than three decades in his career. He is honored with some of the most prestigious awards in the community.

Such recognition and awards are proof of Cantore's well-deserved historical achievements as a meteorologist.

Jim Cantore Net Worth And Earnings

Being a meteorologist and live weather forecaster is considered one of the most challenging jobs in America. But, with sheer dedication and willpower, Cantore has been on the field for over 34 years now. Jim is considered one of the most respected TV personalities in America. Along the journey, he might have cashed in a fortune for his contributions. So, how much is his salary and earnings? Let's see what adds up to Jim Cantore's net worth.

Jim Cantore has built a successful career earning a decent income along the way. He has been an exceptionally good meteorologist in his time at 'The Weather Channel.' He is considered the face of the popular network and was the major reason to build its ratings in the past decades. Having such a prestigious stature in the company, Cantore might have earned millions in his career. According to Glassdoor, a meteorologist's average salary in The Weather Channel is about $62,707 per year. Furthermore, The Bureau of Labor Statistics has estimated the median pay for meteorologists in 2016 is about $44.45 per hour or $92,460 per year. Based on these statistics, we can guess that Cantore's salary might have been a little more because of his enormous contributions to the channel. Furthermore, he has also received hefty paychecks from live TV reporting on various sporting events around the country.

According to Celebrity Net Worth, Jim Cantore's net worth is estimated to be $4.5 million. The multi-millionaire meteorologist is one of the richest reporters in the industry. Being an avid storm tracker, Jim Cantore is nowhere near his retirement plans. His net value is expected to rise in the future too.

Apart from work, Jim Cantore also has an interesting personal life, including his marriage, children, and charity works. Many people know him as an avid storm tracker, but only some recognize him as an adorable family man and a great friend. Going through his Instagram page of 145K followers, Jim Cantore seems like a jolly person who loves to hang out with his friends and children.

Talking about Jim Cantore's married life and children, he was involved in a long-term marital relationship with his ex-wife, with whom he has shared two children. He was previously married to Tamra Zinn or better known as Tamra Cantore. There is very little information about their relationship, but it is reported that the former couple started dating after they first met at the TWC workplace. The couple finally got married on 6th October 1990. After staying together for 19 years, the former couple divorced in 2009. 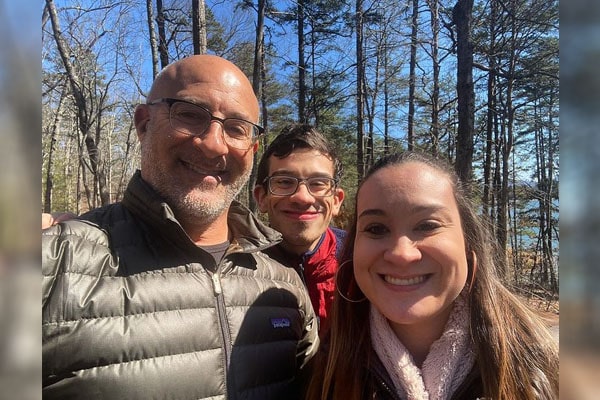 Jim and Tamra welcomed their first child Christina Cantore in 1993 and, later, Ben Cantore as their second child in 1995. It is reported that Tamra was diagnosed with Parkinson's disease at the age of 40, which became worse in the final years of their marriage. The matter became terrible when Jim found out that his son Ben and daughter Christina were suffering from Fragile X syndrome. Despite all the adversities, Jim supported his family through thick and thins in their life.

Since the divorce, Jim Cantore's ex-wife is not seen in the media, but Jim has been involved in some of the rumors regarding his relationships. At one point, there were rumors that Jim Cantore's girlfriend was Alexandra Steele, his colleague from The Weather Channel. Furthermore, Cantore has also been linked with Andrea Butera, who also happens to be a weather enthusiast. 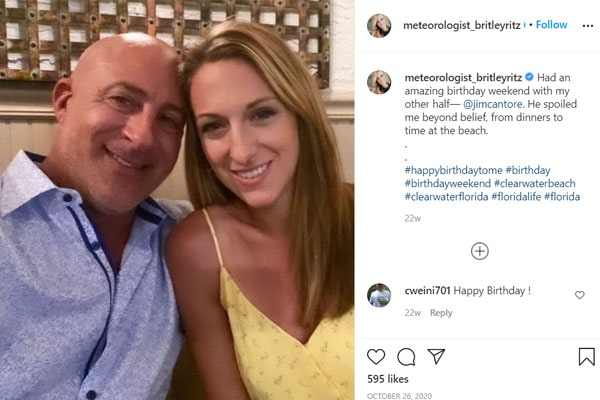 As for now, Jim Cantore can be seen enjoying romantic moments with a fellow meteorologist named Britley Ritz. Scrolling through his Instagram, we can see the lovebirds have been traveling places with each other. Jim Cantore's partner, Britley, even called him her other half in one of her posts. The couple also seems to enjoy quality times with Jim's children and friends.

Involvement in Charity and Social Works

Jim Cantore has experienced many ups and downs in his life. Despite all the hard times and impeccable work ethics, Jim has done charitable works for different organizations. His generous contribution to the Fragile X Research Foundation and the Parkinson's Unity Walk is commendable as his family suffers from these illnesses.

Furthermore, he collaborates with Make-a-Wish Foundation to help children around the country. He has also served as the celebrity cabinet member for the American Red Cross.