Porscha Coleman is an American actress, dancer, singer, voiceover artist, and TV host. She's best known for her television role as Erica Willis on The Parkers, Rachel in the movie Pixel Perfect, and on MTV's show Wild 'n Out. Plus, the beautiful actress is also among the star cast members of Jamie Foxx's family comedy TV series 'Dad Stop Embarrassing Me!'.

Porscha is one of the well-known faces in the American music industry. With over 20 years of professional career highlights, the beautiful actress has built a loyal fan base through her scintillating performances. Today, let's known about Porscha Coleman's biography.

Porscha Coleman was born Porscha Lee Coleman on July 12, 1985, in Van Nuys, California, USA. While any information about her late father is still not available, Coleman's mother, Betty Jean Coleman, was in a musical group in the early 80s. As for her siblings, she is the youngest sister of the former NFL player, John E. Diggs II. 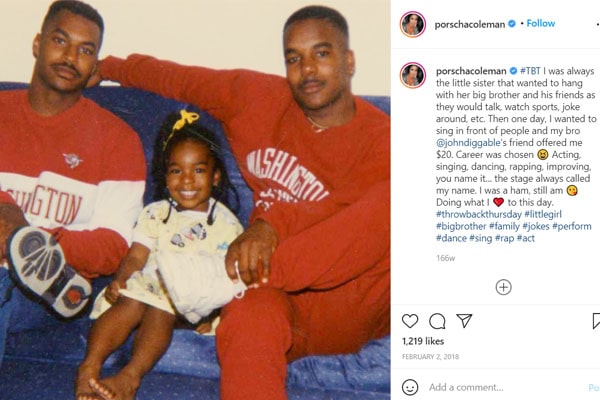 Porscha Coleman used to perform in front of her big brother and his friends. Photo Source: Porscha's Instagram.

Coleman wanted to be a star from her childhood. At the age of five, she had already started singing and performing on the stage. She was even offered a $20 bill to perform in front of her big brother and his friends. To this day, Coleman has been performing and giving her best in acting, dancing, singing, and many more.

Following her dream, Coleman attended Millikan Middle School Performing Arts in Sherman Oaks, California, and later enrolled in Hollywood High School Performing Arts Magnet in Hollywood, California. She became pretty famous at the high school after winning the 'Outstanding Performer Award' in 2001. After graduating from high school, she left no time to start her professional career.

Porscha Coleman has had a very diverse career so far. Whether it as an actress, singer, dancer, or model, Coleman has proved her talent through various art forms. No wonder she has become a well-known public figure of this generation.

As an actress, Porscha has made recurring appearances on TV shows like New Girl, The League, The Parkers, Boston Public, and more. She appeared as Rachel in the Disney Channel Original Movie Pixel Perfect and Woman Thou Art Loosed, alongside Loretta Devine and Kimberly Elise in 2004. In 2007, she showed her comedic skills on season 4 of the hit MTV sketch comedy show, Wild 'n Out, hosted by Nick Cannon. After portraying the character Mochachino on HBO's show Silicon Valley in 2014, she guest-starred alongside star couple Lea Thompson and D.W. Moffett on the hit TV series Switched at Birth. 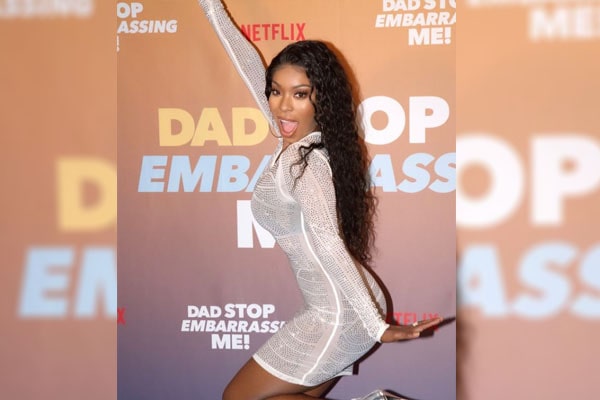 Porscha Coleman is one of the star cast member of 'Dad Stop Embarrassing Me!' Photo Source: Porscha's Instagram.

In 2009, Porscha became a host on the BET's Notarized. While in the show, she interviewed renowned sports figures such as Carmelo Anthony and LeBron James and rappers like Pitbull. She also hosted Spring Bling: Get to Steppin' 1 and Spring Bling: Get to Steppin' 2. In 2012 and 2013, Porscha was featured as a celebrity hostess on The BET Awards, NBC's The Winner Is, Soul Train Awards, and many more. Adding to her collaborative credentials, Coleman appeared in commercial advertisements for KBG, Boost Mobile, Panda Express, Smart Car, and Toyota.

Coleman's professional career got more diverse when she presented her dancing and choreographing skills on some of the biggest stages. She has danced on the Soul Train Awards and the BET Awards with artists like Diddy and 50 Cent. In 2004, she performed at the American Music Awards with Kanye West. She appeared as a lead dancer in sketches for the late-night show, Jimmy Kimel Live!. In 2008, she choreographed and performed in the music video Lolli Lolli (Pop That Body) for Three 6 Mafia. For many years, she continued to perform as a lead dancer in hit music videos for high-profile artists such as Nelly, 50 Cent, and many more.

Porscha Coleman is also a musician. As a recording artist, she appeared on a music game show, the Great Pretenders, and won by singing Jennifer Lopez's 'Waiting for Tonight' and was applauded for her singing skills. In 2007, Coleman sang alongside Tyga on Jimmy Kimmel Live!. She has also released her single track, 'Take it,' which features Academy Award-winning group, Three 6 Mafia.

Currently, she is shooting for Jean-Claude La Marre's 'GangLand' and Jamie Foxx's 'All-Star Weekend.' Her latest project, Dad Stop Embarrassing Me!, starring Jamie Foxx and Kyla-Drew Simmons, was premiered on April 14, 2021, and has collected good reviews from fans worldwide.

Porscha Coleman Net Worth and Salary

With over two decades of hard work and achievements, Porscha Coleman has earned a fortune in her showbiz career. While her primary income source is acting, Coleman also receives a hefty amount from her singing and dancing projects. Besides, her lucrative modeling deals might have also booted her net value. So, how much is Porscha Coleman's net worth?

Aforementioned, Porscha is a multi-talented artist who has had an illustrious career so far. Her contributions to the lavish Hollywood industry could have profited the actress in one way or the other. Besides earning a decent salary as an actor, Coleman also collects substantial paychecks from her singing, dancing, and modeling ventures. According to Salary, an average model in the United States earns about $42,506 to $62,978 yearly. Being a renowned model, Coleman could have earned much higher than the given number. Although Porscha's net worth is difficult to calculate as there are no official records of her earnings, one can guess the actress has racked up a ton of wealth to her name.

Porscha Coleman's net worth is also boosted by her secondary business, i.e., social media. As mentioned in her Linktree, Porscha has diversified her income sources as she continues to earn from various social sites while interacting with her fans worldwide. She has a Cameo account from where she charges $50 for a video message to her fans. She is also involved with Candi, where she interacts with her fans from a virtual meet and greet session. Each session is priced at $50. Furthermore, Coleman is also famous for her interesting Scoolu packages. Some of them are:

Even though Porscha Coleman's net worth cannot be stated in numbers, for now, we can collect enough information about her financial wellbeing. While some sources claim that Coleman's fortune to be millions of dollars, it is almost impossible to estimate her earnings without any factual information. However, looking at her pace and how fast she is growing, we can guess the actress would soon release her net value with a multi-million balance in the future.

Porscha Coleman stands five foot two inches tall and has maintained an alluring physique. With her captivating smile, the gorgeous actress never fails to amaze the audience both on-screen and off-screen. While the young actress has not shared any information about her love life, people are eager to know her relationship status. At the same time, she is busy living her luxurious life with her mother. 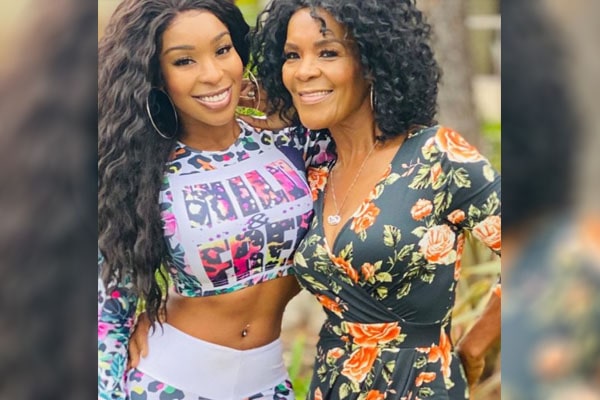 Porscha Coleman is secretive about her love life but enjoys a lavish life with her mother. Photo Source: Porscha's Instagram.

Looking at her Instagram profile, we can see her charming personality. It is obvious that some might have fallen for her, yet, there is no reported evidence of her romantic life. So, who is Porscha Coleman's boyfriend? Is she single? Let's hope to get this question answered soon.