Lucas di Grassi has a family of racing enthusiasts.

Lucas di Grassi is a professional racing driver who is the Formula E world champion in 2017. Moreover, he has also competed in a few tournaments in his career including the 24 Hours of Le Mans, World Endurance Championship, and FIA Formula 3. He has established himself as one of the best racers in Formula E with consistent overall performances.

Having followed success from his early teen life, Grassi has been able to perform well in some of the best Grand Prix races. With the racing business being highly popular over the years, Lucas has managed to showcase his talents massively in the electric car racing business. So, in this biography, let's learn more about how Lucas Grassi has set such a high standard in the racing world.

Father Invited Him To Race

Lucas Tucci di Grassi was born on August 11, 1984, to Brazilian parents in Sao Paulo. Lucas di Grassi's father Vito di Grassi helped him realize his potential as he pushed the racer from an early age toward racing. Grassi's dad worked at the Brazilian heavy vehicles manufacturer company Engesa. Some of the sites have claimed that he is the former Vice President of the company.

After getting an invitation from his old man, Lucas made his kart racing debut at the age of 10 and won his first title when he was 13. The best moment in his teenage life came when he was 16 as he finished fifth overall in the Formula A World Championship. Grassi continued to improve as he won several races in the South American Karting Series and impressed everyone. 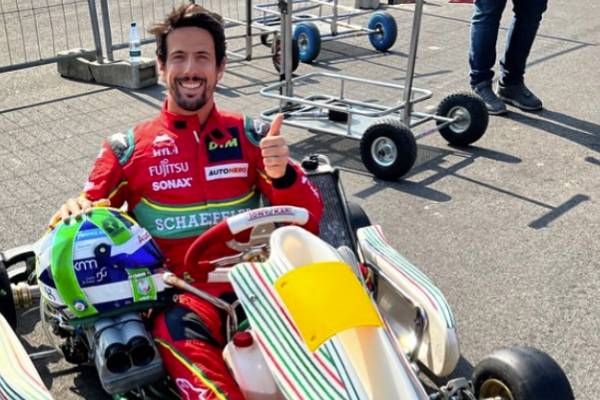 Moreover, Lucas' grandfather from his father's side is Italian but left for Brazil to be permanently located there. Both Lucas and his father have an Italian passport and are quite proud of their original heritage. His family must be very proud of what he has gone on to achieve in his career.

Having been driving since he was very young, Grassi has been in the world of racing for over 25 years. He started with karting, then made his car racing debut in 2002 and won two races. With vast experience in Formula E and winning a bunch of championships, one can assume Lucas di Grassi's net worth is a notable figure.

Grassi took part in the British Formula Three Championship with the team Hitech Racing in 2004. He won two races initially, but could not hold up well going forward as he finished eighth. He stood third in the season-ending Macau Grand Prix and graduated to the Formula 3 Euro Series a year later with Manor Motorsport. Unfortunately, he was involved in a major crash after his car clipped Giedo van der Garde's rear-left wheel.

Likewise, Lucas signed a contract to race for ART Grand Prix in 2006 and was partnered for the first round by Michael Ammermuller. He scored consistent points throughout the tournament and failed to score only once in the first thirteen races. He was partnered with Renault and was developing the new Dallara GP2/08 chassis and also served as the Formula One test and reserve driver.

Lucas was vowing to get into Formula 1 in 2009 with Renault, who was looking to replace Nelson Piquet after a series of poor performances. The team had an option to choose between him and Romain Grosjean for that season, but eventually chose Piquet and Fernando Alonso. So, Grassi chose to remain in GP2 and signed a sponsorship deal with Racing Engineering.

Moreover, the Brazilian racer was announced as a driver for the new Virgin Racing Team on December 15, 2009, and partnered with former rival Timo Glock. According to The Daily Telegraph, Grassi brought around a $6,087,495(£5 million) sponsorship deal. Formula E promoter Alejandro Agag approached Grassi for his technological expertise as a driver to start developing electric cars. Having not been convinced at first, Lucas accepted the deal and was announced as the official test driver for Formula E shortly. Here are some of Lucas di Grassi's stats:

Not just a successful racing career, Grassi has been enjoying a joyous marital life as well. The racer is happily married to his beautiful spouse Bianca Diniz Caloi di Grassi. Lucas di Grassi's wife works as a designer and has shared her impeccable talent for designing on her Instagram. 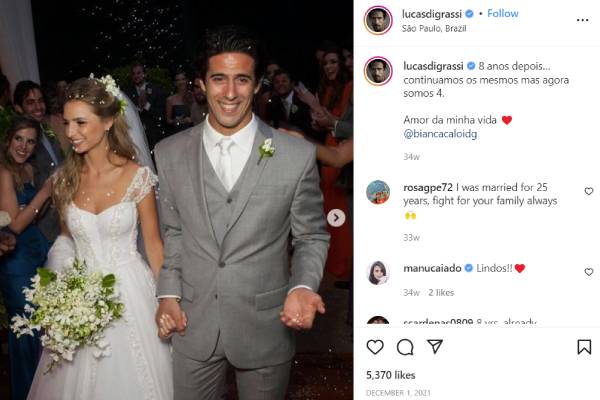 The pair got married on December 1, 2013, in a ceremony held in Sao Paulo with their friends and families. Lucas di Grassi's partner supports his career and has been involved in a lot of car races in the stands. They must be living a happy life with each other as their ninth marriage anniversary approaches.

Lucas and Bianca have welcomed two beautiful children into their lives; a son and a daughter. They seem to really enjoy their parental duties as Lucas often explains how love, support, and discipline are important while his kids are growing up. Lucas di Grassi's children attend his races sometimes and cheer from the sidelines.

Lucas di Grassi's son Leonardo Grassi was born on July 4, 2018. Likewise, his daughter Beatriz Grassi came into this world in February 2021. As mentioned earlier, Leonardo attends his dad's races with his mom and sister. Will he also start following in his father's footsteps later in his life?

Grassi and his family seem to be living a grand and comfortable life with each other. Let's hope he can keep winning titles and make his family proud. Hopefully, they can keep sharing their brilliant found.