Christijan Albers is a Dutch racing driver who has been active in racing sports since the 90s. Albers was a successful DTM driver during his early days and has had further success in the formula one racing sport. The Dutch national even got the opportunity to act as the Team Principal and CEO of the Caterham Formula One racing team and since has been proved to be an essential part of the team.

Albers is one of the Netherlands' great drivers, having competed in Formula One, Le Mans Series, DTM, Belcar, British F3, German F3, International Formula 3000, and Formula Ford 1800 Benelux, having won the German F3 and Formula Ford 1800 Benelux in the late 90s. Christijan has been a successful racer with 46 race starts until his retirement in 2007.

Albers always gave his hundred percent with great discipline, hard work, and a determination to be the best one out there. Additionally, we can see his love for the racing sport through the hard work he puts in his driving, and that's why his fans adore him the way they do. So, today, let's learn more about Christijan Albers.

Christijan Albers was brought into this world on the 16th of April, 1979, in Eindhoven of North Brabant, Netherlands. The Dutch racer was born to father Andre Albers, a successful ace rallycross driver who encouraged and created a passion for driving in Christijan's mind. The former race car driver has not disclosed his mother's name as he is not so open about his personal life. Similarly, much of Albers' educational background is unknown, even though he got his primary education in the Netherlands. 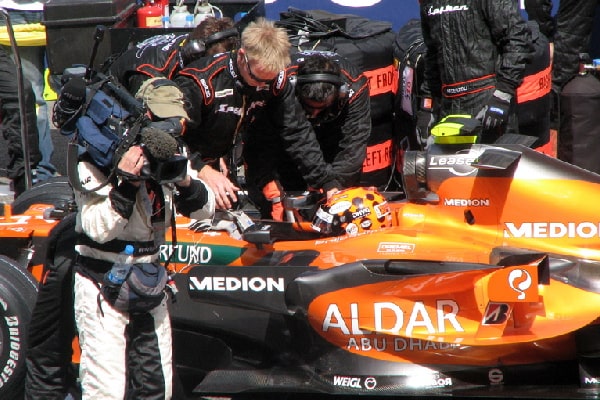 Christijan Albers has been Kart Racing since his early days. Image Source: Flickr.

As all successful drivers do, Albers began his amateur racing career at a young age. He started kart racing from his early days of racing. The passion and willingness to be a professional formula one racer since childhood kept Albers going throughout the years.

The racer's hard work from his early years led to Christijan Albers' career to be what it is today.

Albers won the National Karting Championship in 1997 in the Netherlands. Subsequently, he won the Formula Ford Championship in the same year and won the German F3 series in 1999 in a more competitive Opal Racing. Following the massive success in junior leagues, Albers made his first step into the senior racing leagues in 2000 in the Formula 3000 World Championship, working with Arrows racing alongside Mark Webber. His run at F3000 was not as successful as he had anticipated, and he left the Arrows team after a season.

Christijan Albers joined the Deutsche Tourenwagen Masters, known as DTM, in 2001 and entered the German Touring Car Series. Albers had an average first year with Persson Motorsport, one of Mercedes's junior DTM teams.

In the 2003 season, Christijan Albers got his major break in the series as he got to drive for the Mercedes team, AMG, one of the most successful teams in that series. That year turned out to be a great one for Albers as he won multiple races and battled Bernd Schneider for the title up to the very last race, where he missed out due to an accident during the race.

Following his success, Christijan Albers finally joined the Minardi racing team for the 2005 formula one season. The Minardi team principal Paul Stoddart had previously worked with Christijan and believed that Albers had matured as a driver since his F3000 disappointment. His initial season at the F1 was sub-par, and the following year, Mirandi sold the team to Red Bull and was renamed Toro Rosso.

Albers later joined the Midland Racing team for the 2006 season, when he finished 22nd for the Midland-Toyota team. Albers' final year in F1 was the worst among the three, with him finishing in the 25th position. After his run-in at formula one, Albers returned to an uncompetitive run in DMT and also raced for the Audi at American Le Mans Series and participated in one race.

After his retirement from racing in 2007 to an extent and in 2009 completely, Albers was appointed the Team Principal for Caterham by the Colin Kolles' team in July of 2014. In September of said year, Christijan Albers resigned and was replaced by his assistant, Manfredi Ravetto. All these achievements throughout his career would surely make Christijan Albers' net worth a big amount. 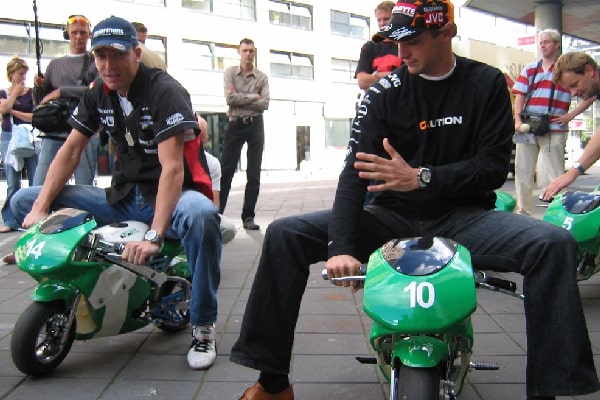 According to FIA, the total prize money for the F3 series is €200K or $240K and the driver winning the rookie title receives €100K or $120K, which Albers has won. The top-tier racers in formula One earn about $25 million to $30 million, but a mid-tier racer like Albers would not earn that much.

Despite this, Albers' salary must have been quite a lot during his formula one day. Additionally, Albers' time as a team principal would surely help increase Christijan Albers' net worth. He spends his fortune in vacations, leisure activities, and various cars, among which is a $3.6 million Bugatti Chiron.

All the riches Christijan Albers has been able to earn during his career would surely allow him to like a lavish life with his wife.

Christijan Albers has had a long professional racing career. Moreover, he has been in a committed relationship for even more years. The racer turned team principal got married to Liselore Kooijman in 2006 after a long relationship with her. The couple tied the knot in a festive ceremony in Amsterdam. The lovely pair live together in their house in Monaco. Furthermore, Christijan Albers' wife is very supportive of him.

Despite Albers' marriage being strong for more than fifteen years, the couple has not disclosed any other personal information. Due to him being a private person, no information on Christijan Albers's children has come out in public. If the couple has a kid is unknown, we hope they find happiness and joy in whatever they pursue in the future.