Any racing fans might be familiar with the name Antonio Giovinazzi. He is a former Formula One racer who raced for Alfa Romeo in the 2019-2021 seasons. He currently competes in the 2021-22 Formula E World Championship. He has been involved with several race teams in his career.

From being a kart racer to competing in F1, the driver has certainly achieved quite a lot of success. He has established himself as one of the successful racers of his time. Also, did you know he started karting when he was three? Well, there are several unknown stories of the racer, which we will be discussing in the following biography.

Grew Up In A Supportive Household

The racer was born Antonio Maria Giovinazzi on December 14, 1993. He was welcomed by Vito Giovinazzi and Anna Giovinazzi. He spent his childhood in Martina Franca, a Metropolitan City of Bari, Apulia. Also, Antonio and his sister, Valentina Giovinazzi, grew up in a loving and supportive household. 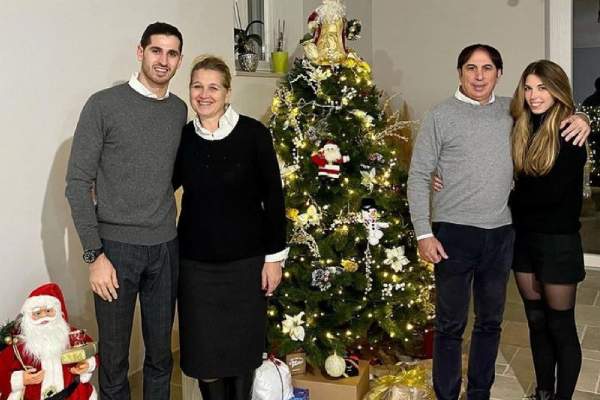 Antonio Giovinazzi's father, Vito, used to be a transport company's representative. In an interview, the racer revealed that whenever his old man went around several companies, he used to talk about Antonio before talking about his work. Vito used to take his son around Italy to encourage his growth. The father-son duo shares a close-knit bond.

On the other hand, Antonio Giovinazzi's mom is a housewife. She used to worry about her son as, at 13, he was traveling abroad alone, accompanied by only mechanics mostly. She had a hard time accepting everything but eventually came around.

The Italian racer, who comes from a middle-class background, did not live in luxury. But his parents made sure he and his sister never missed anything. Despite the financial circumstance, his dad and mom believed in him, and he later went on to make them proud.

Likewise, talking about his educational background, Giovinazzi has not revealed much.

Antonio Giovinazzi Net Worth And Career

Antonio had already learned how to recognize the logos of every car by age two. Before he was three, his dad was about to buy him an electric mini-Ferrari. Later, an owner of a local kart track, Michele Palmisano, offered him the sale of a 38cc petrol kart. Giovinazzi Sr. agreed and took it to his son. At first, the racer became scared due to the noise. But, the next day, he gave it a go, and his love for racing began.

The 6 feet tall driver has raced several races and even bagged a couple of championship titles under his belt. Apart from immense fame, he must have earned significantly. So, we can assume that Antonio Giovinazzi's net worth is a considerable sum.

As mentioned earlier, the Italian driver started karting when he was three. The next year, his old man bought him an official 50 cc, and by the time he was seven, Vito took him with his BMW to the kart track. Antonio's first race was in Mottola, where he took pole position. Later, he went on to claim several karting championship titles. Then, in 2012, he made his single-seater debut by participating in Formula Pilota China.

Furthermore, in 2013, Giovinazzi competed in the British F3 Championship, where he became runner-up. Then, the following year, he claimed 6th place in the FIA Formula 3 European Championship. Likewise, he was a runner-up in the series' 2015 season, where he claimed 6 victories.

Also, during the 2013 British F3 International Series race at Spa, the driver was hit by Jann Mardenborough.

In 2016, Giovinazzi competed in the International GP2 series with Prema Powerteam. There too, he finished in second place and took three podiums and five wins. In September of that year, Scuderia Ferrari announced the driver would perform simulator work for them. Then, three months later, he was confirmed as the team's third driver in the 2017-18 season.

From 2019 to 2021, the Martina Franca native partnered with Kimi Raikkonen to race for Alfa Romeo in F1. At the end of the 2021 season, he left the team and became a reserve driver for Ferrari along with Mick Schumacher. Then, Dragon Penske Autosport signed him and Sergio Sette Camara for the 2021-22 Formula E World Championship.

Talking about his fortune, Antonio Giovinazzi's net worth mainly comprises his earnings from salary, sponsorships, and other ventures. For example, during his three-season stint with Alfa Romeo, Antonio earned total cash of $1,580,000. Likewise, a Formula E driver earns $61,198 annually, as per ZipRecruiter. So, as a racer in the series, Antonio's income must be considerable.

Similarly, the handsome sportsman is sponsored by several brands like King Taco, Carrera, Sparco, Paul & Shark, etc. Hence, he must be earning significantly from those deals too.

Who Is Antonio Giovinazzi's Girlfriend?

To talk about his personal life, the racer was in a blissful relationship with Antonella Cavalieri, as per a 2021 article. Antonio's dad stated in that interview that the couple had been together for many years. However, as per WagsF1's Instagram post, Antonio Giovinazzi's girlfriend is Antonella Maraglino. So, are both women the same person? 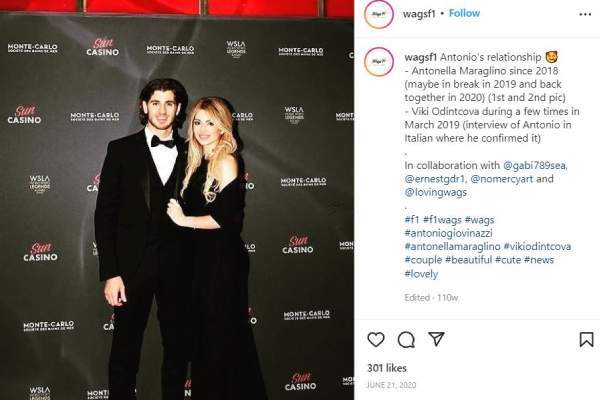 As per eCelebrityMirror, Antonio and Maraglino have been dating on and off since 2018. However, as the duo prefers to keep their personal life out of the media limelight, it remains a mystery regarding when and where they met. Several sites have claimed that the pair broke up in 2019, and Antonio was romantically linked to Viki Odintcova.

The truth about Antonio Giovinazzi's partner will only be revealed after he discloses it. So let's hope he comes at ease to talk about his love life in the coming days. Nonetheless, we hope he continues making his parents proud. All in all, we wish him a life full of happiness and success.