Ice hockey has been around for centuries and has produced some of the world's top players. Throughout its course, countless players have made an everlasting impact on the game. The athletes do not, however, get to the top overnight. In fact, they practice for years and have a string of minor successes before claiming a great victory.

Shayne Gostisbehere is one of the players whose name is commonly mentioned for breaking through from his amateur career and making it to the top. Gostisbehere is an American professional ice hockey player who plays as a defenseman for the Arizona Coyotes of the National Hockey League.

Since his debut in the professional league, the athlete has established himself as a significant figure in ice hockey and is primarily regarded as a top player in the sport. As a result, fans are understandably enthusiastic about Shayne Gostisbehere's professional and personal life. So, today, let us have a better understanding of the athlete.

Despite his French ancestry, the hockey player grew up in Florida, where his father moved to pursue a career as a professional jai alai player. As a result, Shayne was raised in an athletic family and developed an interest in sports from an early age.

Shayne Gostisbehere's father used to be a professional jai alai player but sustained an eye injury when Shayne was only two years old, ending his professional career. Regrettably, the sportsman is a private individual who does not post much about his family on social media accounts.

Nonetheless, we may assume that the player's parents, both of whom are sports fanatics, must be extremely pleased with his accomplishments. 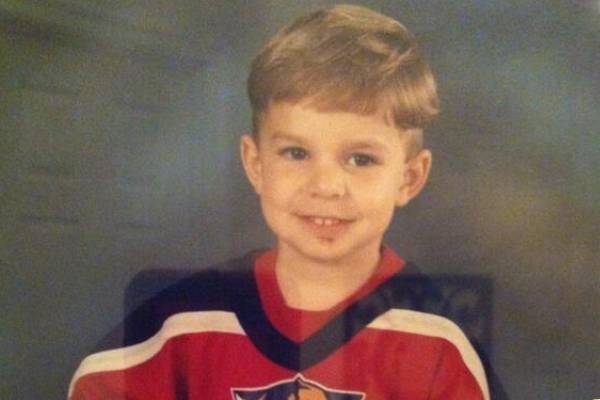 Shayne Gostisbehere's sister, Felicia, was a figure skater, and he would frequently accompany her to her practices, which prompted his interest in ice hockey. His sibling is currently a business owner and designer. His sister is also a hockey enthusiast who frequently posts images of herself watching the athlete's game and cheering him on.

Furthermore, after undergoing surgery to repair a broken anterior cruciate ligament in his left knee, Shayne's sister was the sole reason the hockey star considered resuming his professional career.

While the athlete was recovering in rehab following his operation, he frequently contacted his older sister, who encouraged him to continue pursuing his dream. Obviously, the siblings are incredibly close and are always there for one other in good times and bad.

As mentioned above, Gostisbehere developed a passion for ice hockey from a young age. The athlete grew up watching a lot of hockey, particularly the Florida Panthers, a professional ice hockey team based in Miami, and soon became obsessed with the sport. As he grew up, he channeled his obsession into a dream and is considered one of the best ice hockey players globally.

Even though Shayne Gostisbehere's career began at a young age, he has developed and earned a professional ice hockey player's reputation. First, let us look at how he progressed from being a member of college teams to becoming a professional player.

Gostisbehere began his ice hockey career as a traveling team member at Marjory Stoneman Douglas High School before transferring to South Kent School. Despite being drafted by the Philadelphia Flyers, he chose to play collegiate ice hockey for the Union Dutchmen of the ECAC Hockey conference. 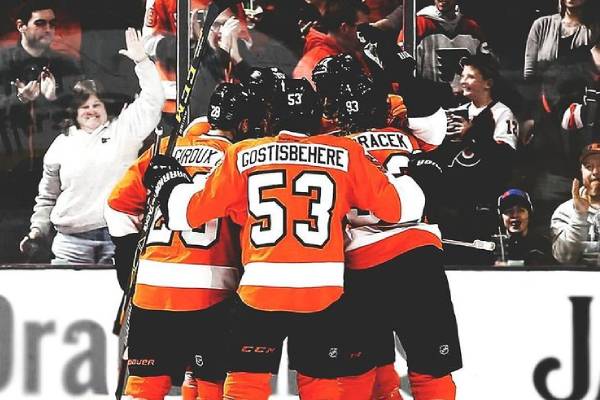 Shayne Gostisbehere played in multiple games against various colleges as a college ice hockey team member, eventually winning the Hobey Baker Award, among other honors. Gostisbehere's outstanding play on the rink across three seasons helped the Union win their first NCAA championship in 2014. He was also named the tournament's Most Outstanding Player.

The Flyers recognized all of the player's efforts, and he signed a three-year entry-level contract with them on April 15, 2014, kicking off his professional career.

The Florida native was assigned to the Adirondack Phantoms for the 2013-2014 season, where he played in the team's final two games as a defenseman. Unfortunately, both games Shayne participated in ended in defeat. The athlete made his NHL debut on October 25, 2014.

For the 2014-2015 season, the athlete was called back by Flyers general manager Ron Hextall to the team to replace fellow defenseman Braydon Coburn and Andrew MacDonald temporarily. Gostisbehere was returned to the Phantoms and continued to play for them until he suffered an anterior cruciate ligament injury when he took a check from Kevin Raine. Consequently, the athlete did not participate in any other events that year.

After his recovery, Gostisbehere played several matches, but the defenseman lost his stance and struggled on the ice. As a result, the player was granted a healthy scratch thrice in his back-to-back games, resulting in a storm of harsh tweets, prompting him to remove Twitter from his phone.

As the seasons progressed, Gostisbehere began to recover and perform, and he finished the 2017-2018 season with 13 goals and 49 assists.

Although Shayne Gostisbehere's career was starting to reach its peak, it was a path full of injuries and struggles. First, the player dropped his stats in the 2018-2019 season with only 37 total points owing to a knee surgery he had during the season. In addition, the player struggled throughout his 2019-2020 season and went through numerous other surgeries that year.

Furthermore, Gostisbehere contracted COVID-19 before the 2020–21 season, which caused him to miss the first few games. Despite this, the athlete regained his composure on the rink until he sustained another knee injury, a mild ACL sprain, which forced him to miss a week of the lineup. Finally, on May 5, Gostisbehere was suspended for two games for a hit to Pittsburgh player Mark Friedman.

Despite these setbacks, Gostisbehere was traded to the Arizona Coyotes on July 22, 2021. Hopefully, the athlete will do better as time goes on.

Shayne Gostisbehere Net Worth And Earnings

As the athlete has been playing since his early years, Shayne Gostisbehere's net worth primarily consists of his earnings as a professional ice hockey player. However, throughout his career, he has played for various teams and has won numerous matches. Consequently, the player must have amassed a substantial fortune.

Even though Gostisbehere prefers to keep his riches to himself, he has signed some fantastic contracts with teams that have unquestionably increased his earnings. For example, on June 9, 2017, Shayne signed a six-year contract worth $27 million with Philadelphia and had an annual average salary of $4,500,000.

Furthermore, the athlete was recently traded to the Arizona Coyotes, and he must have signed a multimillion-dollar agreement with them. So there's no debate that Shayne Gostisbehere's fortune is of a tremendous amount. 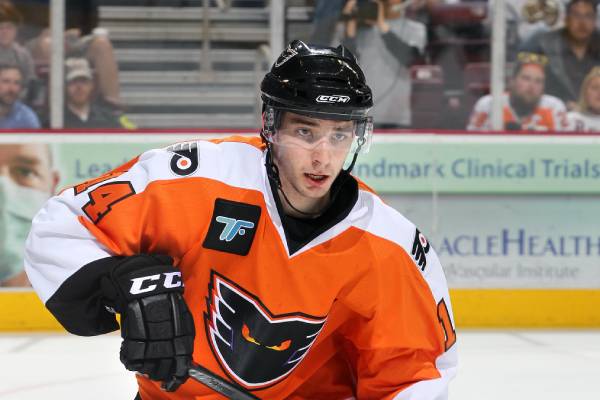 As previously said, the athlete has a long history of working in the sports industry and has amassed a substantial fortune. The following is an estimated list of Shayne Gostisbehere's earnings, along with the teams and years:

Looking at the estimated yearly earnings of the athlete, one can presume that the NHL player is a multimillionaire. Furthermore, the athlete is paid a significant amount as a national team member, which must have improved, Shayne Gostisbehere's net worth tremendously.

The athlete has been in the spotlight for his personal life in addition to his hockey career. Because of his handsome features, many admirers are curious to find out who Shayne Gostisbehere's girlfriend is. Fortunately for them, the handsome hunk appears to be in a blissful relationship with Gina Valentine, his long-term partner.

Although the public is still unaware of how the couple met, they appear to have started dating in 2014. However, as previously stated, the athlete is not one to flaunt his personal life on social media; thus, there is little to no mention of his relationship on his profiles.

Nonetheless, the couple has not kept their relationship a secret, even if they are discreet about it. And unlike the athlete, Shayne Gostisbehere's partner has posted countless romantic photos on her Twitter page. And in May of 2020, the sportsman proposed to his girlfriend, and the couple got engaged, but no evidence about their wedding has surfaced. 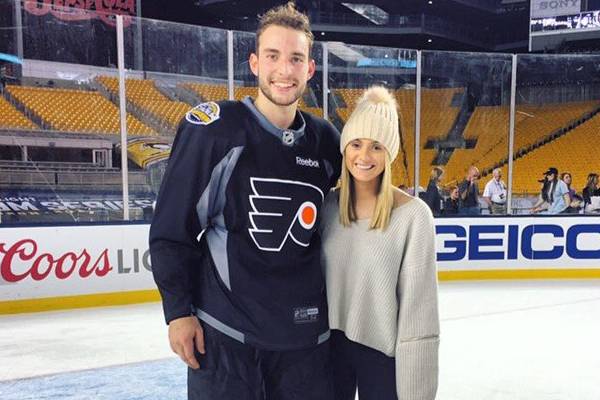 However, on July 8, 2021, his fiancee tweeted a romantic photo with the message "One-month Countdown." Given the time difference between the two occasions, the pair may have already tied the knot. Moreover, Gina has also taken the athlete's last name, adding to the rumors of them being married.

Whether or not Gina has already become Shayne Gostisbehere's wife is unclear, but for the time being, the happy couple seems to be enjoying their time together. They love traveling to new places and engaging in enjoyable activities. Let us hope that their joy grows exponentially over time.