Rory McIlroy, a Northern Irish Professional golfer, is a former world no.1, spending more than 100 weeks as the number-one ranked professional golfer as indexed by Official World Golf Ranking. McIlroy won four major championships at the age of 25, which was achieved only two times in the history of golf by Jack Nicklaus and Tiger Woods. Additionally, he has won various prestigious awards and is considered one of the greatest golfers of all time.

Popularly known by his nickname ‘Rors,’ which is also stamped on his custom-made golf ball, Rory McIlroy is a well-known golfer among golf lovers all around the world. From a toddler with a golf club mimicking his father’s swing to lifting golf’s most reputed awards, the famous golfer’s life is awe-inspiring and glorious. Let’s learn about Rory McIlroy’s biography.

Rory McIlroy was born in Holywood, County Down, Northern Ireland, on 4th May 1989 to his parents, Rosie McDonald and Gerry McIlroy. For academics, he did his primary education at St. Patrick’s Primary School and then attended Sullivan Upper School. 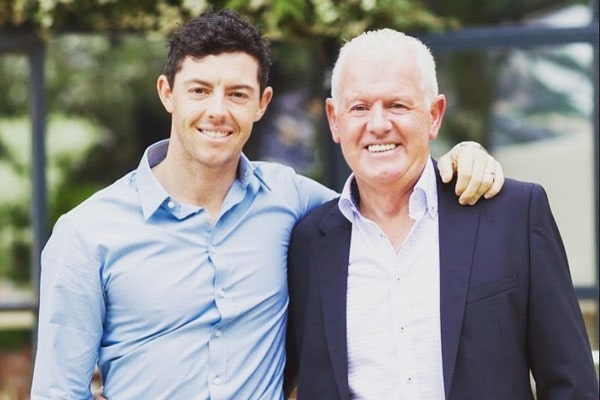 McIlroy was introduced to golf at an early age by his father, Gerry McIlroy, also a fine golfer. Obsessed by the art of golfing, young McIlroy insisted on visiting Hollywood Golf Club almost every day. The enthusiastic little boy was in desperate need of a professional coach to guide him in the right direction. Seeing his boy’s passion, Gerry called the club’s then-professional, Michael Bannon, for his guidance. Nobody thought that Michael was about to coach a future golf superstar. Today, more than 20 years on, Bannon is still the coach as well as a mentor of the golfing legend, Rory McIlroy. 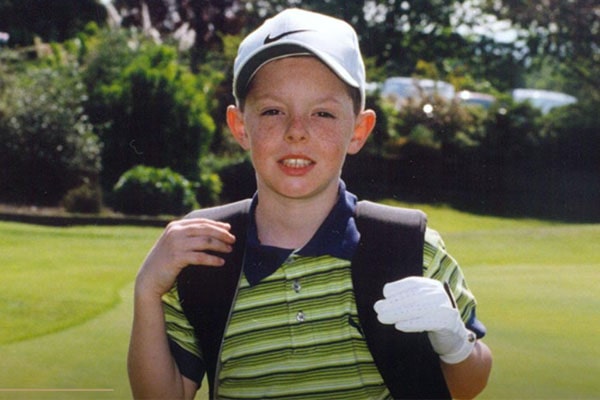 At the age of seven, McIlroy joined Holywood Golf Club as its youngest member. It is reported that Rory’s parents held multiple jobs to earn additional income to fund their son’s golf training. He then began putting hours on training until his hands could no longer feel the club. He was soon pronounced as a child prodigy or ‘golf’s next big thing’ at just nine years of age when he won the under-10 World Championship, his first international title, in Doral, Florida.

Rory McIlroy started his amateur career with many silverwares and recognition from his pre-teen years. He was a member of Europe’s Junior Ryder Cup Team, winning the title in 2004 in Ohio. At the age of 16, Rory shot an 11-under-par 61 at Royal Portrush in the Magners North of Ireland Championship in 2005. He also took part in the 2005 British Masters. In the same year, Rory became the youngest champion of the West of Ireland Championship and the Irish Close Championship, followed by the European Amateur title at Biella Golf Club in Milan, Italy, in 2006.

In 2007, McIlroy entered his first major championship competition at Open Championship held in Carnoustie, Scotland. He became the highest finishing amateur and won a silver medal in the competition. On 6th February 2007, he secured a top spot in Amateur World Golf Rankings. As a member of Great Britain and Ireland team, he also participated in the 2007 Walker Cup held in Royal County Down.

In 2007, after splitting with his then-agent Chubby Chandler, the Northern Irishman signed with International Sports Management. At the age of 18, Rory started his career as a professional golfer and graduated to the European Tour on 18 September 2007. His first ever club swing in a professional tournament was at the Quinn Direct British Masters, where he shot 290(+2), putting him in a tie in 42nd place. The same year, he finished 3rd at the Alfred Dunhill Links Championship and earned a tour card, becoming the youngest member in the history of The European Tour, finishing 4th place at the Open de Madrid Valle Romano.

At the end of his season, Rory was invited by Tiger Woods to have a swing at the 2007 Target World Challenge and 2008 AT&T National. Despite the call from such a huge personality, he declined the invitation sticking rigidly to his European plans next year.

In 2008, McIlroy started his European Tour finishing 2nd place at the 2008 UBS Hong Kong Open. In the same year, he entered the Top 200 in the Official World Golf Ranking for the first time and ranked 79th later that year. McIlroy failed to become the European Tour’s third-youngest winner when he lost to the Frenchman Jean-François Lucquin at Omega European Masters in Switzerland. 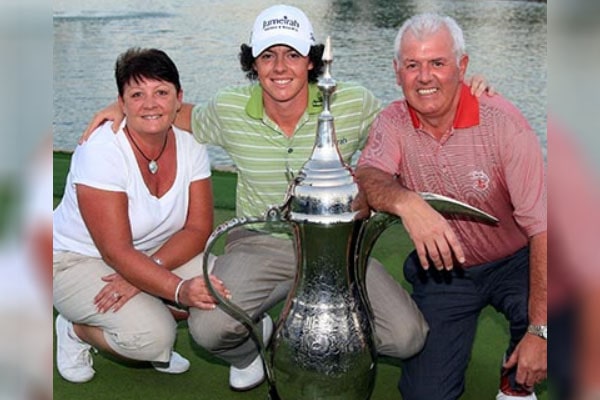 McIlroy has had a charismatic professional career with 28 professional wins, winning 4 major championships and securing 4th place in Masters Tournament. Rory has won 18 times in his PGA Tour career. He has one Players Championships, three World Golf Championships, five FedEx Cup playoffs events, and five other PGA Tour titles to his name. Due to his achievements, Rory has been hailed as a legend on PGA Tour.

Having such honorable victories as a professional golfer is certainly a huge achievement. Furthermore, he has won trophies in Major Championships too.

Although he has won four major championship titles, he is yet to win Masters Tournament, which could be another milestone in his career. Currently, he is in an ongoing PGA Tour and European Tour. 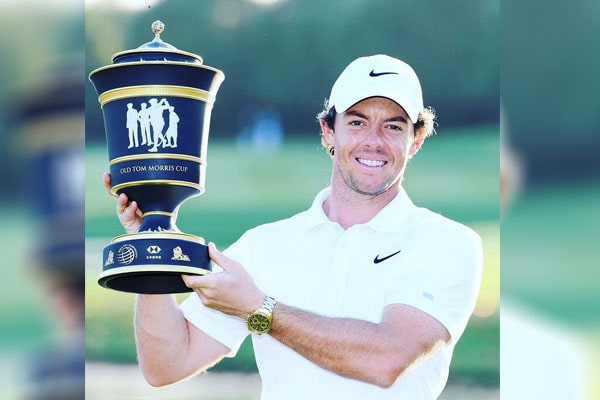 Furthermore, he has also been a FedEx Cup Champion in 2016 and 2019. Rory McIlroy became the first European to win three World Golf Championship Titles.

The former world number one has been pairing with great caddies since his professional career started. Shortly after Rory's professional debut, he paired up with JP Fitzgerald in 2008, who helped him win all of his four major championships and grabbing the top spot at Official Golf Ranking. During his final years with the McIlroy, Fitzgerald banked an estimated amount of $1.65 million in PGA Tour as reported by Forbes. Although Fitzgerald was Rory's caddie for almost a decade, unfortunately, they had to part ways with each other in late 2017. "I was getting hard on him," Rory cited as they parted ways on good terms, reported ESPN.

In August 2017, Rory McIlroy appointed his childhood friend Harry Diamond as his caddie. Both Irishmen have an applaudable history on the golfing field. Since Diamond caddied McIlroy, they have been working on their next championships. Diamond was also seen in the role of the best man at McIlroy's wedding in 2008, as reported by Belfast Telegraph.

Even though Rory McIlroy has been named one of the best in golf’s history, his life has also been surrounded by controversies. Whether it is by defining the Ryder Cup as an “exhibition” or writing “shut up, failed golfer” to commentator Jay Townsend on his criticism about McIlroy’s course management skills during Irish Open, Rory's controversial remarks have always fueled a hot debate in the news. Later, McIlroy stated that his comments were made in defense of his then-caddie JP Fitzgerald, whom Townsend had been blaming for McIlroy’s mismanagement since 2008.

In 2013, when McIlroy was world number one, he withdrew from the prestigious 2013 Honda Classic. His main reason for the withdrawal was tooth-pain. Similarly, in March 2015, Rory aggressively threw his club into the water right after hitting his ball during WGC-Cadillac Championship. Like many other sports personalities, Rory McIlroy also has tons of controversy surrounding him. However, his personal achievements have overshadowed his controversies.

Rory McIlroy Net Worth And Earnings

Being such a high-profile sportsperson, Rory McIlroy’s net worth mostly comes from his career earnings and endorsements.

According to Celebrity Net Worth, Rory McIlroy has a fortune of $150 million. Being a part of an elite club, Rory has won several individuals as well as collective championships and majors by the age of 25. Since joining as a professional golfer in 2007, people speculating about McIlroy’s wealth is an ongoing trend.

Rory McIlroy’s earnings mostly come from the prize money as a championship winner and brand endorsements. It is reported that his total career earnings add up to $34 million so far. In 2012, he earned more than $10 million on the PGA Tour alone.

In 2013, there was a rumor about him signing an endorsement deal worth $100 million to $200 million with Nike. Shortly after, McIlroy secured another deal with TaylorMade, which was valued at $100 million, to endorse his golf equipment. In addition, he won a $10 million bonus pool on FedEx Cup in 2016, and again after three years apart, he won the cup and was rewarded with the record-breaking prize money of $15 Million.

Since then, he has been earning millions of dollars from his salaries and endorsements as well. It is reported that McIlroy earned up to $80 through his income sources from 2017 to 2019. He was Forbes’s 6th-highest-paid athlete in the world in 2017, and now he stands at the 14th highest-paid-athlete ranking.

Furthermore, McIlroy has even created a company, Rory McIlroy Inc., headed by Donal Casey, which manages the royalty payments from his diverse endorsements, and that also adds up to his assets.

Rory McIlroy has been in two relationships before marrying his wife, Erica Stoll. He was first in a relationship with Holly Sweeney, whom he dated from 2003 to 2011. Shortly after his breakup with Sweeney, he started dating Caroline Wozniacki, a famous tennis player, from 2011 to 2014. They even got engaged on 21 May 2014, but sadly their relationship did not work. According to Bleacher Report, McIlroy ended their relationship with a 3-minute phone call.

Rory McIlroy is married to former American PGA employee Erica Stoll. The couple were in love and got engaged in December 2015 and finally got hitched in April 2017 in a lavish ceremony held at Ashford Castle in Cong, County Mayo. Since then, the pair have been living happily together. 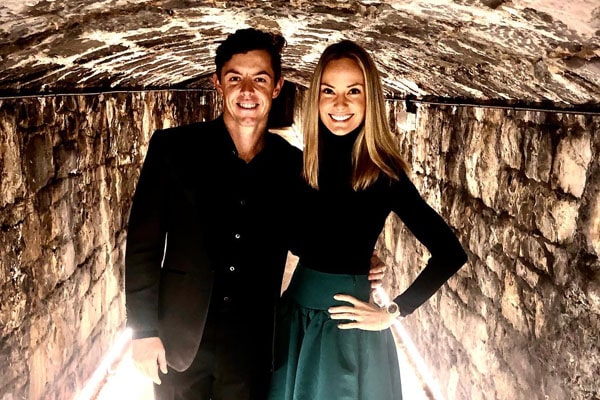 On September 3, 2020, the McIlroy couple finally announced the birth of their first child on Twitter. Rory McIlroy's daughter, Poppy Kennedy McIlroy, was born on August 31, 2020, at 12:15 p.m. The former world champion has been great as a professional golfer, but now he also needs to be a great dad.