Patrick Murphy is an American softball coach who is serving at the University of Alabama. Image Source: Social Media.

In any sports, coaches help to set vision and goals and motivate athletes to become better and perform better. So, today we will be talking about Patrick Murphy, who has been serving as a softball coach for many years. He is currently the head coach of the Alabama Crimson Tide softball and is doing fantastic at his job.

Many people are curious about Patrick Murphy's achievements and personal life as he has been actively involved in coaching for three decades. As a result, we will try to give essential information in this brief article. So, please stick with us till the end to learn more about his struggle, career, and many more.

Was A Basketball Junkie

The skilled coach was born Patrick Stacy Murphy on November 28, 1965, in Waterloo, Iowa, USA. Patrick Murphy's mother is Jean Murphy, aka Jeanie Murphy. He frequently posts pictures of her on his social media sites, expressing his love for her. On the other hand, Patrick's father passed away in the late 1980s.

While growing up, Murphy and his cousins often played softball at their grandmother's house. But more than softball, he was a basketball junkie. So every Saturday in the winter, the young guy used to watch basketball from 1 to 5 p.m. Furthermore, he also wished and thought he would be the next star at Notre Dame. But, he was not tall enough to play basketball. In one of the interviews, Patrick mentioned that he always wanted to be a coach his whole life 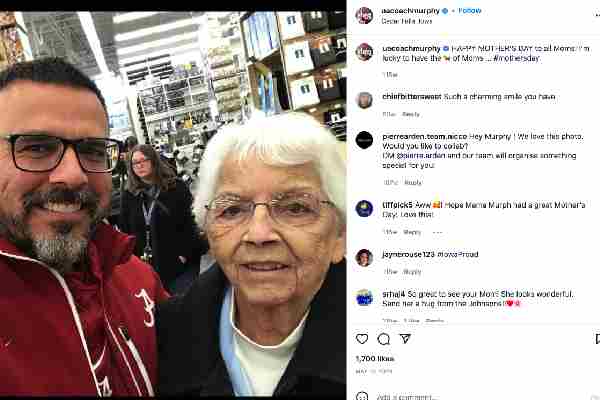 Patrick Murphy Net Worth And Career

Patrick has been coaching for many years and is very hardworking and dedicated. He has worked for many teams, and his outstanding abilities have brought him great fame and fortune. Therefore, Patrick Murphy's net worth must be adequate, given his several decades-long experiences in coaching.

Talking about Murphy's career beginnings, he started coaching Little League baseball while he was a student at Northern Iowa. After he graduated from college, he was hired as a varsity baseball coach by Sumner High School in Sumner, Iowa. In 1992, he switched to being an assistant softball coach, and in 1995 became the head coach at Independence High School.

Later the same season, the Waterloo native became the Division II Northwest Missouri State's interim head softball coach for a year. Then, he was promoted to the Division I collegiate level as an assistant coach at Alabama in 1996. Moreover, he became the softball head coach at the University of Alabama in 1998 and has been serving in that position since then. He entered his 23rd season as the program's leader in 2021.

Furthermore, Murphy led his team to its first NCAA Tournament appearance in his first season as the head coach. He also helped Crimson Tide to its first-ever Women's College World Series berth after the best regular season in school history. The team also set a record by winning 66 and 22 SEC games.

Additionally, the sports personality was also offered the head coaching position at Louisiana State University in 2011. He went there for several days before returning back to Alabama. The coach also revealed that he made a mistake and realized that he belongs to Alabama, stating, "Alabama is where my heart is."

Hence, looking at his earnings, it's safe to say that Patrick Murphy's net worth is significant. Fran Fraschilla is another coach who has gained massive fortune.

Well, the softball coach is a private person and hasn't revealed anything about his partner. Also, it's not sure whether he is dating anyone. As the Northern Iowa alumnus is in his mid-fifties, could it be he is a married guy? Still, Patrick Murphy's wife has never been seen in the media and remains a mystery.

Although Patrick is present on social media sites, he has not revealed any information regarding his spouse. He must be trying to safeguard his family from unwanted media attention. Also, going through his IG posts, we often see him posting pictures with his players. It looks like he treats his athletes as his children and seems like a father figure. Hopefully, we will discover more about Patrick's love life in the upcoming days.

Nonetheless, the Alabama head coach's career is going well, and he must be living a comfortable and happy life. Let's hope he is doing well in his personal life too. We wish he gains more success and fortune in the coming days.