Anthony Sanders is the reigning first base coach of the Baltimore Orioles of MLB. Image Source: Social Media.

The term 'Visionary' ideally refers to Anthony Sanders, the first base coach for the Baltimore Orioles of Major League Baseball (MLB). He is a former professional outfielder and current coach. Born Anthony Marcus Sanders, he played in MLB for several years and has been involved professionally in the sports field for several decades.

After years of hard work and dedication, Anthony has established himself as a successful baseball coach. Hence, to learn more about his life story and professional journey, stick with us till the very end.

Anthony was welcomed by his parents on March 2, 1974, in Tucson, Arizona. Anthony Sanders' father, Benjie Sanders, was a long jumper on the field and track team when he attended Arizona. Also, Anthony's dad served as a photographer for The Arizona Daily Star for a long time.

On the other hand, significantly less is known about his mother, Phyllis Sanders. Nonetheless, Anthony's parents are kind, giving and have a positive outlook on life. The former's family always motivated and supported him from his early childhood. 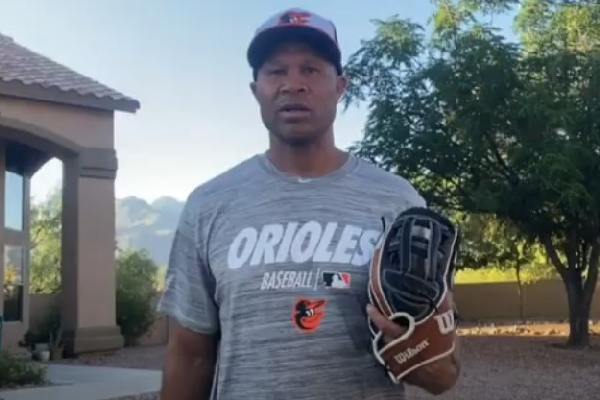 Furthermore, as a kid, the former baseballer played all sports, from soccer to baseball to basketball. His early years of participation in Santa Rita Little League and Tucson Youth Football prepared him for success at Santa Rita High School.

Anthony can appreciate his upbringing with his parents in Tucson for helping him survive through 26 minor and major stops over thirteen years, as well as time spent in Mexico and Japan. Likewise, talking about his educational background, the athlete graduated with a Master of Management from the University of Phoenix in 2014.

His Football And Basketball Career

While the Orioles coach is widely known for his baseball playing career and achievements as a baseball coach, not many know that Sanders participated in three sports as a student-athlete at Santa Rita High School from 1988 to 1992. He stood out in basketball, baseball, and football and had also joined the honor society and student council.

In his junior and senior years, the Tucson native was the first-team All-State/City in football. Furthermore, in 1992, he was ranked as the third-best high school quarterback in the nation and was a Parade All-American. Anthony had his pick of scholarship offers from division one colleges and two sports to select from. Later, Sanders committed to the University of Arizona.

Likewise, when it comes to basketball, the three-sport athlete earned All-City accolades while leading his varsity basketball team to the state championship game. His number ten jersey was retired by Santa Rita High School. Nonetheless, the sportsman is widely recognized for his baseball career; hence, let's discuss his achievements as a coach and player as well as his salary on the baseball field.

Anthony Sanders Net Worth And Career

As a junior and senior, Anthony was the first-team All-State/City in baseball. Eventually, the Toronto Blue Jays selected him in the seventh round of the 1992 MLB draft. Afterward, the baseballer played professionally for 15 years, spending time with the Blue Jays, Reds, Mariners, Rockies, White Sox, and the NPB's Bay Stars.

Not only that, Anthony won a gold medal for the USA baseball team at the 2000 Summer Olympics in Sydney, Australia. In addition, he contributed to the Seattle Mariners winning 116 games in 2001, an MLB record. Now, let's take a quick look at Anthony Sanders' salary earnings and MLB career stats.

Besides, with more than 23 years of professional baseball experience, Sanders has spent more than nine years as a manager and coach for the Colorado Rockies. He was promoted to manager of the Grand Junction Rockies in 2013. Furthermore, in 2016 and 2017, the coach oversaw the Class A Advanced development and coordinated the Rockies' outfield and baserunning in 2018 and 2019.

After the 2019 season, the UOPX graduate was appointed the Baltimore Orioles' first base coach. Overall, with an exceptional coaching career, we can expect that Anthony Sanders' net worth is massive, although it has not been revealed yet. Nonetheless, his annual pay from the Orioles must be quite good, and he likely leads a comfortable lifestyle.

And with more victorious years to come, we are certain that Anthony's wealth will reach even newer heights. Also, you might be interested to read about Brian Snitker, another professional baseball coach.

His Wife Has Passed Away

It's unfortunate and tragic when you have to bid goodbyes to someone you have thought of spending your entire life with. Well, apparently, that's the case with the former Mariners player. He lost his beloved wife, Denise Sanders, in March 1997.

Anthony Sanders' wife, Denise, was killed in a skiing accident. She hit a tree during a downhill run at Sunrise Ski Park in Greer and lost her life. Apart from this, little is known about the coach's partner and their relationship timeline.

After losing his spouse, Sanders has maintained his love life low-key. Ever since it hasn't been known whether he remarried or not. Surely, it must have been a difficult phase for Anthony.

Anthony Sanders Is A Proud Father Of Three

The Arizona native is a proud parent of three sons, Logan Sanders, Marcus Sanders, and Troy Sanders. Among his three children, Logan is the oldest one. He graduated from Catalina Foothills High School in 2019 and attended Colorado Mesa University in 2020.

Furthermore, Logan kept his freshman status and decided to move to Ken Jacome's program at Pima since COVID-19 necessitated the season's early termination. In addition, for Jeff Scurran, Logan played as a wide receiver in his senior year at Catalina Foothills in 2018.

Anthony Sanders' son takes inspiration from him and has followed in his footsteps. In an interview, he explained that he learned from his dad that work ethic is everything. Anthony teaches his kid that you must work hard and focus on achieving everything you want.

Furthermore, Anthony's second child, Marcus, and his youngest son, Troy, a sophomore, also followed in his footsteps by pursuing their academic goals and desires to play football and baseball. Besides, all his boys are raised in Tucson, and they are likely to achieve sucess in their fields with the guidance of their old man.

The sportsman has always been there for his children, and he has been looking after them with the utmost love, care, and compassion. We hope that Anthony Sanders' children will succeed in their respective professions and await learning more about their lives soon.

Nevertheless, the Baltimore Orioles coach maintains the principles his parents instilled in him about continuing to be a significant influence on people through his baseball experiences, which include lots of ups and downs. He is dedicated, focused, and a visionary sports personality whose entire focus is on winning and making his baseball team stronger. All in all, we hope Anthony has prosperous and blissful days ahead.